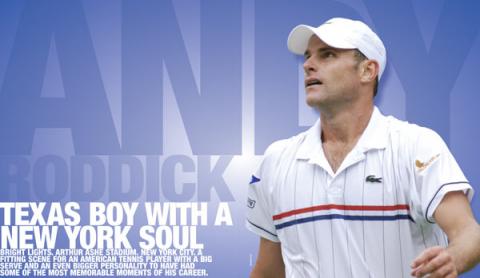 Bright lights. Arthur Ashe Stadium. New York City. A fitting scene for an American tennis player with a big serve and an even bigger personality to have had some of the most memorable moments of his career.

Andy Roddick was born in Omaha, Nebraska and now lives in Austin, Texas, but the rowdy crowds at Flushing Meadows treat him like a hometown hero. Roddick announced his arrival as the new face of American tennis when he won the 2003 US Open by defeating Spaniard Juan Carlos Ferrero in three sets. Nine years later, he waved goodbye to the Big Apple after playing his final match against Juan Martin del Potro in the fourth round of the 2012 US Open.

Andy Roddick’s connection to New York extends beyond 2003. On Andy’s 9th birthday, his parents took him to the 1991 US Open. The highlights of his trip were sneaking into the player’s lounge and watching then-39-year-old Jimmy Connors’ improbable run to the semifinals. “That was my first taste of live tennis, and it was that run,” he has recounted, “so that's as good as it gets.” Fifteen years later, Connors spent a year and a half as Roddick’s coach.

Even as a child, Andy displayed a tremendous work ethic. By age 7, he spent hours hitting tennis balls into a rebound net in his parents’ Texas garage, all the while dreaming of being a professional athlete.

“My mom would ask, ‘What did you do today?’” he once recounted. “I’d say, ‘I beat Lendl, Becker, Edberg. They didn’t put up much of a fight. But Pete and Andre were a little tough, but I took them out, no problem.”

In 1992, when Andy was 10, the Roddick family moved to Boca Raton to intensify his training.  Eight years later, in 2000, he won the Junior US Open and Australian Open titles, rose to the No. 1 Junior in the world and turned pro.

The “Present” of US Tennis 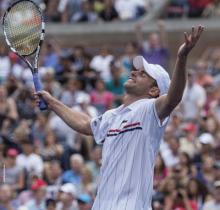 When Roddick was crowned 2003 US Open Champion, he was ready to fill the gap left by the retirements of former US greats Pete Sampras, Jim Courier and Michael Chang. Walking into the pressroom after the match, the brash 21-year-old set the ground rules for the dialogue. “No more, ‘What’s it feel like to be the future of American tennis’ crap! No more,” he announced to the reporters.

Okay, they agreed, so how does it feel to be the “present” of US tennis? “It feels good. That feels very good.” He went on to explain, “If my winning promotes the sport and makes it bigger and better, then awesome. I’m all for it.”

Although he never won another Grand Slam title, Roddick’s commitment to hard work kept him at the top of the sport, finishing in the Top 10 for nine straight years and winning at least one title every year from 2001 to 2012.

His impact on American tennis has also been measured by his dedication to representing his country in Davis Cup, where he led the US to victory in 2007.

“Well, Andy has certainly set a high bar.  He's been the leader of the team for the past decade,” current Davis Cup captain Jim Courier said. “God knows how many wins under pressure he's clinched for us…The team is going to miss Andy, there is no doubt about that.”

Roddick embraced the role of mentor to young Americans by offering advice and inviting players such as John Isner, Sam Querrey, Ryan Harrison and Donald Young to train with him in Austin.

“He's been my biggest role model the last 10 years playing tennis, watching tennis,” said Querrey. “He's been a great guy, a great leader to us all.”

Andy’s off-court popularity was an equal factor in his long reign as the face of American tennis.  He transcended the world of sports – Roddick was a bona fide celebrity. Named People magazine’s 2003 “Sexiest Athlete of the Year,” he was also featured in publications such as Rolling Stone (shirtless) and Vogue. He was involved in a high-profile relationship with singer-actress Mandy Moore and hosted Saturday Night Live.

Endorsement deals with Rolex, Lexus, American Express, Babolat and Lacoste, among others, ensured his constant prominence over the course of his career.  And even when his ranking dropped in 2011 to outside the top 20, Roddick ranked 10th on Forbes’ list of the world’s highest-paid tennis players, with an estimated $8 million in off-court earnings that year.

Known for his humor and quick wit, Roddick also employs a sharp tongue and occasional temper, especially towards officials. An incident at the 2008 Australian Open was one of his most memorable tirades. During a frustrating match, Andy yelled, “You're an idiot! Stay in school, kids, or you'll end up being an umpire.” Two years later at the same tournament he berated another line judge but apologized on Twitter after reviewing the tape when he realized the call was closer than he had originally thought.
His willingness to accept responsibility for his mistakes mitigated the damage to his reputation. Fans recognized Roddick’s passion for tennis and appreciated that he fought hard to win every match. Legend has it that after losing to Roger Federer in Miami in 2009, Andy stopped in the player tunnel, removed every racquet from his bag and smashed them one at a time. 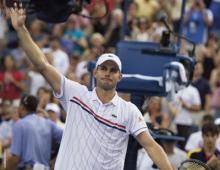 Between 2001 and 2012, Roddick competed against Roger Federer 24 times. The Swiss maestro won a whopping 21 times, including a string of eight consecutive finals. Andy lost four Grand Slam finals in his career, each at the hands of Roger. His run at the majors was also cut short three times in the semifinals and once in the quarterfinals by the man who now holds a record 17 Grand Slam titles.

Federer’s dominance on the Tour, and over Roddick specifically, has stimulated discussion about how much more the American could have achieved had Federer not existed.
“Roddick probably would have had three or four more majors if not for Federer,” John McEnroe said during the 2012  U. S. Open.

The “what if” question became a staple in interviews, but Roddick refused to speculate about Federer’s hypothetical absence. “I don’t know if I’d change it,” he once told journalists. “For me, if you can’t compete against the best and beat the best, then you don’t deserve to win these titles.”

Asked if he ever felt sorry for himself that he was born into Federer’s generation, Andy explained his outlook. “No. If I feel sorry for myself, I’m a real asshole…You know, I get a lot of opportunities. I’m very lucky. If I start feeling sorry myself, I need a serious sense of perspective.”

The lopsided rivalry ended on a positive note for Roddick, who notched one of his three victories over Roger during the 2012 Sony Ericsson Open in Miami. “There is no script in sports,” he said after the match. “Nights like tonight are why you play the matches. You don’t know what’s gonna happen.”

On August 30, 2012, a day when he wasn’t scheduled to compete, Roddick called for a press conference. Fans Tweeted in bursts of 140 characters, expressing hopes that the briefing was related to his 30th birthday. However journalists on site confirmed the news: Andy Roddick’s career will end at the 2012 U. S. Open.

“I just feel like it's time,” he revealed. “I don't know that I'm healthy enough or committed enough to go another year…I don't know that I want to disrespect the game by coasting home.”
Fellow players were asked to comment on his abrupt decision and to reflect on his career.

Serena Williams said: “You know, Andy's been great.  He's been great for American men's tennis, great for the US Open, doing so much, playing so well so often, just being such a great player.  A great attitude, incredibly fun to watch.  You know, I know a lot of people look up to Andy Roddick. That's who I want to be like.”

Another American player, James Blake, said he had been hoping for a change of heart. “To be honest, I thought it would have changed his mind when he beat Federer in Miami.  To me that showed he could still beat the top guys…Definitely surprised, but happy for him because he's doing it on his terms.  He didn't go out with an injury.  He didn't do it really for anyone else.  He's got, in my opinion, I hope he's got no regrets.  He's had an unbelievable career.”

“He's had an amazing career,” said Federer. “He was in those Wimbledon finals.  He could have gotten that title… In my mind, he is a Wimbledon champion as well, a wonderful ambassador for the game.  I'm thankful for everything he's done for the game, especially here for tennis in America.”

Fans must wait five years to see if Andy will be inducted into the International Tennis Hall of Fame. Jimmy Connors told the New York Post his former pupil should absolutely be enshrined. “There are guys who are in there with a lot less, to be honest about it. And with his Davis Cup career and the effort Andy’s put in to be a great champion, sure it’s a Hall of Fame career.”

For his part, Roddick says he’ll be happy with what he’s accomplished regardless, but a Hall of Fame plaque would be embraced. “Obviously it's the ultimate honor of any tennis player, and that's something I'd be extremely humbled by.  But I'm certainly not going to be presumptuous about anything. If it happens, I'll be thrilled and amazed.  If it doesn't, I'll probably still be thrilled and amazed with what I was able to see.”

As he adjusts to a new pace of life that doesn’t involve packing, traveling, practicing and competing, he says his focus will shift to the Andy Roddick Foundation, which is opening a youth tennis and learning center in Austin by 2013. The charity has raised more than $10 million since he founded it in 2001.

“My perfect scenario is that kids 10 years from now won’t know that I ever played tennis, but will be positively affected by this program we are starting now,” he told Michael Barnes of the Austin American-Statesman. “I feel like this is an opportunity of a lifetime to effect change for the better, and I feel lucky to have it.”

After losing his final match on September 5, 2012, Andy stood on Arthur Ashe Stadium looking up at the crowd with tears in his eyes, drinking in the final moments of his professional tennis career. His parents, Jerry and Blanche, wife Brooklyn Decker, coach Larry Stefanki, trainer Doug Spreen and the rest of his support team struggled to contain their emotions.
“For the first time in my career, I'm not sure what to say,” Roddick told the crowd. “Since I was a kid, I've been coming to this tournament. I felt lucky just to sit where all of you are sitting today, to watch this game, to see the champions who have come and gone. I've loved every minute of it.”

To a resounding applause and many tear-filled eyes, Andy waved goodbye to fans and walked off the court, putting closure to a magnificent career. Austin, Texas may be Andy Roddick’s home, but his legacy will forever live in New York City.