By Kait O'Callahan in Features

During the early rounds of a tournament, deciding which tennis match to watch can be like choosing a meal at your favorite restaurant. The tendency is to watch the same players compete just as you would choose your favorite food.  Serena Williams, Maria Sharapova, Novak Djokovic and Roger Federer are players that crowds continue to flock to due to their skill, success and consistency. But sometimes, taking risks on new additions to the ATP and WTA menus can be more rewarding. You might discover a new flavor of the month that’s worth sticking with.

We all know the top four on both tours provide great entertainment value, but here are some names you might want to consider paying more attention to in 2013. They’re young, they’re talented and they’ve soared up the rankings in 2012 displaying a will to improve and the ability to remain calm under pressure.
Martin Klizan: Klizan announced himself as a serious contender when he upset Jo-Wilfried Tsonga and Jeremy Chardy on his way to the fourth round of the US Open in 2012. Two weeks later, the 23-year-old Slovak proved that his success wasn’t a one-off by winning his first ATP World Tour title in St. Petersburg, shooting his ranking into the top 40. While the left-hander may have caught our attention on the hard courts of New York, he was a French Open junior champion and has multiple Challenger titles on clay. He credits his recent success to his coach, Karol Kucera, who has helped him focus on tactics and mental strength. His talent won’t remain a secret for long; the ATP presented him with the 2012 Newcomer of the Year Award.
2011 Year end Ranking: 117
2012  Year end Ranking: 30
David Goffin: Goffin was the luckiest of lucky losers at Roland Garros in 2012; the unheralded Belgium player took advantage of his late entry to upset Radek Stepanek, Arnaud Clement and Lukasz Kubot on his way to the fourth round. He then showed the speechless crowd that he wasn’t just lucky when he took the first set off Roger Federer. Goffin eventually lost to Federer in four sets, but he again proved himself a player no one wants to face in the early rounds by beating Bernard Tomic and Jesse Levine to reach the third round of Wimbledon. Goffin’s favorite quote is “Impossible Is Nothing,” an attitude the 22-year-old clearly takes to heart.
2011 Year end Ranking: 174
2012  Year end Ranking: 47
Jerzy Janowicz: Janowicz started the year unable to make it to Australia due to a lack of money and sponsorship, with his ranking floundering in the 200s. Yet he proved that late is better than never when he became the story of the month in November. Coming through qualifying at the Paris Masters, he made it all the way to the final by upsetting Philipp Kohlschreiber, Marin Cilic, Andy Murray, Janko Tipsarevic and Gilles Simon with unpredictable, aggressive play (and a hit-and-miss drop shot). Janowicz was just as shocked as tennis fans worldwide, saying after beating Tipsarevic, “It’s really not easy for me to realize actually what is going on in my life right now.” The 22-year-old Pole will need to adjust to the newfound attention in the off-season; all eyes will be on him at the Australian Open.
2011 Year end Ranking: 221
2012  Year end Ranking: 26
Sam Querrey: Querrey’s run up the rankings was halted in 2011 due to an elbow surgery that caused him to miss Wimbledon and the US Open. Querrey faced a long road back to the top 20, but judging by his form in 2012, his chances are looking good for improving on his career-high ranking of 17. The California native made the third round at both Wimbledon and the US Open this year and claimed the Farmers Classic title, but it was at the Paris Masters where he truly announced his return. After losing the first set 6-0 to Novak Djokovic in the second round, Querrey found his serve and forehand in a grinding three-set win. He went on to beat Milos Raonic before losing to Michael Llodra in the quarterfinals, pushing his ranking up to 22. He enters 2013 with a renewed attitude and plenty of momentum to build on.
2011 Year end Ranking: 93
2012  Year end Ranking: 22

Kei Nishikori: Much like Sam Querrey, plenty of hype surrounded Nishikori before an elbow injury forced him off the tour in 2009. Nishikori has taken his time to get back to the top, but the 23-year-old Japanese player had his best year on tour in 2012. After making the quarterfinals in singles play at the Olympics, Nishikori pleased home fans by winning the Rakuten Japan Open in October, stunning Milos Raonic in the final in three sets. The win raised him to a career-high ranking of 15 and marked his first ATP 500 series title and second title overall. Already a bona fide star in Japan, Nishikori may not be able to fly under the radar for much longer.
2011 Year end Ranking: 25
2012  Year end Ranking: 19

Varvara Lepchenko: Lepchenko received long-awaited U. S. citizenship in 2011 after fleeing Uzbekistan in 2001, and being able to play officially for her adopted country clearly looks good on her. Starting 2012 ranked 127, she made the quarterfinals of Madrid and the fourth round of Roland Garros, upsetting Francesca Schiavone at both tournaments and Jelena Jankovic in the latter. She went on to make the third rounds at both Wimbledon and the US Open, cementing herself as a consistent competitor on all surfaces. Now ranked 21, Lepchenko currently finds herself the No. 2 American player and was thrilled to be picked for Team USA at the London Olympics. The 26-year-old prides herself on tough mental strength and a powerful forehand. With citizenship issues finally settled, Lepchenko can look forward to focusing on her top priority in 2013: winning. “I'm looking into winning tournaments and whatever comes with that. Whatever it is, I want to win it.”
2011 Year end Ranking: 110
2012  Year end Ranking: 21
Mona Barthel: Barthel started off 2012 with a bang, roaring into the top 50 with her first WTA title coming in Hobart and a third round finish in her debut Australian Open. She headed into Indian Wells full of confidence and served for the match twice against Victoria Azarenka, who was in the midst of a stunning winning streak. Barthel lost the match but announced her arrival at a serious contender. The speedy German let her foot off the gas in the second half of the year, but at only 22 years of age, she has plenty of time to improve her consistency.
2011 Year end Ranking: 67
2012  Year end Ranking: 39
Laura Robson: Britain has been patiently waiting for their favorite up-and-comer to break through in a big way. The teenage Robson finally made good on her potential at the US Open this year, taking out Grand Slam champions Kim Clijsters and Li Na on the way to a fourth-round finish. She rounded out the year with a silver medal at the Olympics when she teamed up with Andy Murray for mixed doubles and made her first WTA final at the Guangzhou Open. With Andy Murray having recently claimed a major, the pressure of playing for Britain may be off Robson for a bit, leaving her plenty of room to continue to build on her ranking in 2013.
2011 Year-end Ranking: 131
2012  Year-end Ranking: 53 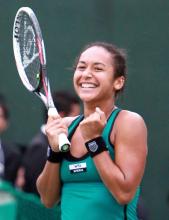 Heather Watson: Laura Robson may be Britain’s favorite, but Watson may be their best hope. Ranked No. 1 in Britain and placed inside the top 50, the 20-year-old has been going about her business quietly. That business in 2012 involved making the third round at Wimbledon, winning her first WTA singles title at the HP Open in Osaka and wining two doubles titles (at Stanford and Dallas with Marina Erakovic). She demonstrated fantastic mental strength in saving four match points in the final of the HP Open and is the first British woman to win a WTA title since Sara Gomer in 1988.
2011 Year-end Ranking: 92
2012  Year-end Ranking: 49 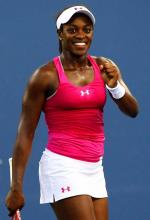 Sloane Stephens: Stephens is not a woman who has flown under the radar in 2012. Unlike many of her American colleagues, the 19-year-old Florida native demonstrated her skills on the clay courts of Europe, making it all the way to the fourth round at Roland Garros. She was unlucky (and possibly a little nervous) at the US Open where she fell in the third round in a tight match to Ana Ivanovic. Stephens plays an exciting, aggressive brand of tennis, and despite the inevitable comparisons to Serena and Venus Williams, she’s carving out her own fan base thanks to a ready smile and refreshing sense of fun.
2011 Year-end Ranking: 97
2012  Year-end Ranking: 38
Tweet
Tweets by @tennisviewmag