By Erik Gudris in Features

Roger and Rafa’s rivalry is important to tennis, but it means even more to its die-hard fans.

In this the golden age of men’s tennis, we’ve been lucky to witness one of the most storied challenges of all-time: The Federer-Nadal rivalry. Since these two titans of tennis first locked horns in 2004, they have contested 19 finals, eight of which were Grand Slams, and while the duo gets along famously as friends, there’s no question that each is desperate to defeat the other when they meet.
Federer and Nadal enthusiasts share in that desperation, and it is the passionate fan that helps to make the rivalry endure. Most fans accept a player’s win or loss in stride, yet there are the intense followers who take each match personally – some say too personally.
Whenever the friendly foes meet for a highly anticipated showdown, supporters expect trash talking, even before the match begins. From the faithful “Fedatics,” clad head to toe in “RF” baseball caps and warm-up jackets, to the ”Rafaholics,” their faces painted in the colors of the Spanish flag and clutching hand- made “Vamos Rafa!” signs sprinkled with glitter, these hardcore acolytes take tennis fandom to new heights.
Why some fans gravitate to the “Swiss Maestro” or the “Mallorcan Matador” is a matter of individual taste. Shannon Compton from Louisville, Kentucky admits she took to Rafa because the Spaniard was bold enough to challenge the almighty Federer. “A big part of it is that Roger was this GOD among tennis players,” says Compton. “He was supposed to be invincible, and then suddenly here comes this scrappy, longhaired kid in funny pants from Spain who could beat him, even when no one else could.”
Like many who were drawn to the polarizing contrast of the two megastars, Compton found the heightened drama of the successive meetings highly alluring. “Whether you wanted Roger to swat aside the upstart or you wanted Rafa to steal the crown, it was damn cool to watch.”
Jonathan Moss of West Yorkshire, United Kingdom operates PeRFectTennis.com, which praises everything Federer. Moss became a Federer fan when Roger defeated Pete Sampras at Wimbledon in 2001. He confesses that he’s extreme and that owning of tons of Federer’s clothing and gear makes him a “Roger replica on court minus the shot making.”
When asked if he takes a Federer loss to Nadal personally, Moss chimed, “I just think from a purist’s perspective it’s bad for tennis. I can appreciate Nadal’s physicality and hustle, but I definitely can’t appreciate his style of play whatsoever. It does Roger’s game an injustice when he loses matches to Nadal.”
The Nadal-Federer rivalry often encourages fighting words from fans that spill into heated comments on tennis forums and websites. Stephanie Myles, a tennis journalist for the Montreal Gazette, navigates between the two contentious sides while writing about both athletes. “If I write something remotely critical about Federer, I hear it from his fans who accuse me of being a Rafa apologist,” says Myles. “If I write anything remotely critical about Nadal, I then hear it from Nadal’s fans who insist I must be a Fedanatic. I can’t be both, can I?”
Unlike fans who cheer fervently for either Federer or Nadal, Myles stays neutral. “I’m a fan of the game and what these two impressive but imperfect talents bring to it.”
Despite that Federer is often described as the greatest of all-time (GOAT), what gets under the skin his fans is the Swiss star’s losing record against Nadal, which currently stands 17-8 in favor of the Spaniard. Although Federer’s devotees won’t deny the stats, many justify the defeats. “I don’t think the H2H matters all that much – a lot of those defeats have come on clay, which is Rafa’s best surface and arguably Rogers worst,” says Moss. “I don’t think it’s a stat that puts question marks over his greatness.”
Beth Wilson of Austin, Texas manages NadalNews.com, a website that searches and posts every Nadal tidbit of news, says the battle of stats between the two camps can be fierce. “I used to want to reply with stats of my own, but you know, people will always see things how they want to,” she says. “It’s human nature. I’m perfectly aware I have my own blind spots where Rafa is concerned. I don’t understand why we can’t just say these are both great players, and we are lucky to get to watch them play.” 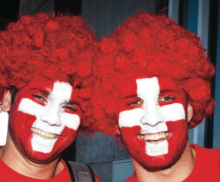 Tennis writer Bobby Chintapalli agrees that the rivalry between the fans, though often goodnatured, does get too personal at times. “Many Federer and Nadal fans keep it healthy. But I’ve seen a few fans get downright nasty,” says Chintipalli. “I’m also surprised when people misconstrue a positive comment about one player as a slight against the other. A comment about one doesn’t necessarily have something to do with the other. After all, apart from being in this amazing rivalry, each is also just an amazing player, period.”
Wilson started her site after being tired of read- ing Nadal fans comment over why he switched from his once trademark Capri pants and sleeveless tops to more traditional garb. And not to be outdone, Federer’s fans are often involved in heat- ed discussions over Federer’s choice to wear shirts with or without a collar. Many of Fed’s fans are convinced he plays better while sporting a collar, since wearing a shirt without one makes him appear, gasp, mortal. Chintapalli says fan obsession with the details is actually ideal. “I don’t think they’re taking it too far. As a neutral observer of Federer and Nadal, I enjoy watching their fans enjoying their guys. It’s nice to see people passionate and, even better, when it’s tennis related.”
Sometimes fans go overboard when displaying their support for athletes. However, the “Fedatics” and the “Rafaholics” are no different than the “Cameron Crazies” of the Duke Blue Devils, or the “Cheeseheads” of the Green Bay Packers, sports fans that receive almost as much attention as the teams they praise. Rivalries are part of every professional sport and regardless of whether you cheer for Federer or Nadal, it’s hard to deny that fans add a valuable dimension to the sports scene. Because of the fans, the debate between Federer and Nadal will likely last well beyond the stars tennis careers.
Tweet
Tweets by @tennisviewmag