David Ferrer: Tasting the Fruits of His Labors at Last 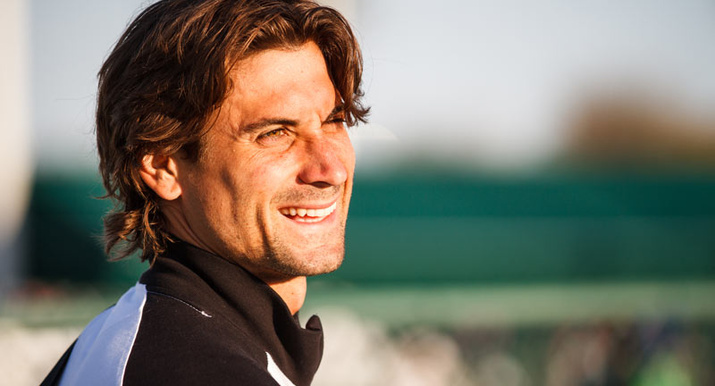 Good things can happen to those who wait—and to those who work hard while waiting. More than any element of his game, tenacity has defined David Ferrer during a career spent in the shadow of Rafael Nadal. While his compatriot has amassed 13 major titles and broken countless records, Ferrer has become known as the best of the rest among his nation’s tennis talents. 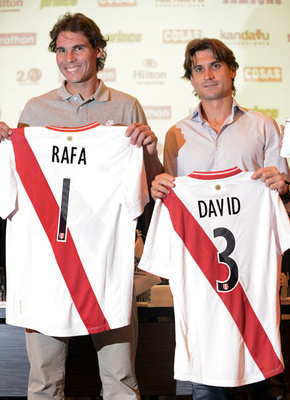 That achievement in itself is no small feat. Spain has populated the ATP World Tour with an outstanding generation of players over the last decade. Ferrer attributes this dominance in part to the cyclical nature of tennis. “I think that it’s a generational thing,” he mused. “Sweden once dominated tennis, but now they have no players at the top. Over the past 10 years, Spain has been very fortunate to have produced some really outstanding players, and that requires a lot of luck as well.”

“He [Rafa Nadal] was an amazing player already when he was young. It’s the combination of that mentality and the tennis talent. The chances of getting someone with that combination are one in a million. Rafa has the best mentality I’ve ever seen on a tennis court.”

Ferrer’s homeland has natural advantages for players seeking success at the sport’s highest level. Even champions from other nations, such as Andy Murray and Svetlana Kuznetsova, have exploited those advantages by training at Spanish academies. “We have very good coaches, and the weather in Spain is perfect for playing tennis,” observes Ferrer. “It’s important that you develop good technique as a junior to get a good foundation for your game, and our junior coaches are excellent.”

One of those junior coaches played a role in shaping the gritty work ethic for which Ferrer has become famous. When he was an edgy teenager, he told this coach one day that he didn’t want to practice. Ferrer remembers vividly what happened.

“My coach locked me in a small locker room,” he recalls. “And he said, ‘If you don’t want to practice, you have to stay here for a few hours.’ I stayed there for one or two hours until my coach unlocked the door. With younger players, it’s not easy to stay focused and put the work in, so you need your coach to be strong to keep you on track.”

Lessons like those have taught Ferrer to stand firm in adversity while tirelessly pursuing his goals. Other players might have found Nadal’s dominance dispiriting, but 21 losses to his compatriot have not diluted Ferrer’s will to succeed. Nor have they caused him to resent a nemesis without whom his fame would have spread much further. A self-deprecating man, Ferrer once called himself the least-talented player in the top 100. He revealed a similar humility when describing Nadal.

“I think Rafa is different from other players,” said Ferrer. “He was an amazing player already when he was young. It’s the combination of that mentality and the tennis talent. The chances of getting someone with that combination are one in a million. Rafa has the best mentality I’ve ever seen on a tennis court.”

Defying the March of Time 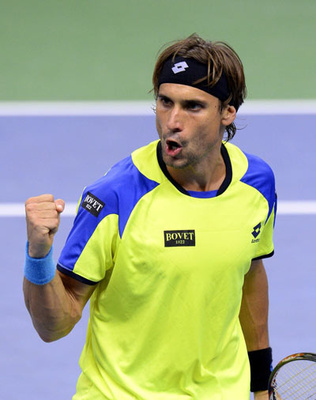 Compiling some of his most impressive results late in his career, Ferrer mirrors a current trend in the ATP. Veterans have flourished more than ever recently, continuing to contend when players of an earlier generation would have faded into retirement. At the age of 30, Ferrer won his first Masters 1000 title in Paris. Last year, at 31, he reached his first major final on the clay of Roland Garros.

The Spaniard credits his durability to consistent health, something that has eluded many champions in a brutally draining sport. “I have more experience with my serve and more confidence, but I think that the most important thing is that I’ve never had an important injury,” said Ferrer. “I’ve always been trying to work on my physique as well as improving my game. Maybe I’ve been born with genetic or physiological advantages. Of course I work hard too, and that plays a part.”

Some aging stars, like Roger Federer, have streamlined their schedules from the long list of tournaments that they played in their prime. They believe that this tactic will help them peak for the most important tournaments by balancing preparation with freshness. But Ferrer, who always has played a busy schedule, sounded uncertain when asked whether he would start to play more sparingly.

“I don’t know,” said the Spanish veteran. “I’m going to try my best to do what I need to do to have a long career. Now I’m at a good time in my career. My goal is always to finish the year ranked inside the top five, which I managed to achieve in 2013 with a good season. But I don’t want to think about the future. I want to focus on the moment and stay in the present.” 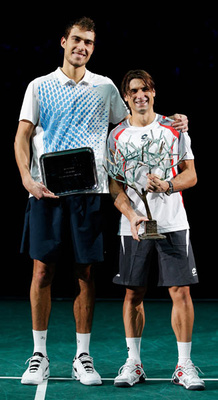 The shortest man in the ATP top 10, Ferrer has devoted his career to playing a sport where height is a valuable asset. Powerful men who stand well over 6 feet have started to proliferate in tennis, unleashing serves at speeds and angles that someone like Ferrer cannot produce. At just 5 feet, 9 inches, Ferrer must find other ways to win points. Working harder for victory than his opponent does not dismay this natural competitor.

“I try to be solid and consistent,” said Ferrer calmly. “There are plenty of players who have big serves, but also quite a few who don’t. You can make up for this. If you don’t have that weapon, you’re usually better at controlling the ball, or you’re more agile moving around the court. If you’re tall, agile and you have a big serve like Djokovic or Murray, then that’s ideal!”

Compensating for the lack of a powerful serve, Ferrer has honed a return of serve that Federer once called the best in the men’s game. While some might disagree with that label, Ferrer has excelled at using his quick hands and compact strokes to survive the first strikes of his opponents. Once he turns their pace against them, he can use his superior movement and consistency to wrest away control of baseline rallies.

“Of course, the game evolves every year, and the players become taller and taller. But I’ve still been able to reach No. 3 in the world, and I’m happy for that.”

“The return of serve was something that I practiced a lot as a young player with my first coach,” reflected Ferrer. “My coach would serve to me from the middle of the court, and I tried my best to react as quickly as possible. I’m trying to improve it every day because it’s an important weapon for my game. It’s taken a lot of work over the years to get it to this point.”

The challenges posed by his stature might seem daunting, but Ferrer knows that champions of generations past have mastered them before. “Juan Carlos Ferrero reached world No. 1 and won a Grand Slam, and he’s a similar height and build to me,” said the Spaniard. “Then there was Lleyton Hewitt. (The Australian Grand Slam champion and former world No. 1.) Of course, the game evolves every year, and the players become taller and taller. But I’ve still been able to reach No. 3 in the world, and I’m happy for that.”

After the Roland Garros final last spring, Ferrer stood next to Nadal on the champion’s podium. He lifted the runner-up trophy as his compatriot raised the coveted Coupe des Mousquetaires again. The hierarchy of Spanish tennis had stayed intact on that day, yet Ferrer did not let that thought deflate him for long.

“It is the best I have played. I will try my best to have another chance to play in a final and win a Grand Slam.”

Whenever Ferrer draws the curtain on his career, few would question that he tried his best to earn as many opportunities as he could.