AMAZED AND DAZED // Idolizing Your Opponent can Hurt Your Game

By Kait O'Callahan in Strokes and Strategy 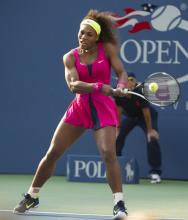 JUAN MARTIN DEL POTRO was overwhelmed when he faced Roger Federer for the first time at the Grand Slam level at the 2009 Australian Open. Coming up against a player he openly admired, del Potro was unable to play at his normal level. The match was much anticipated, but del Potro disappointed fans, winning a mere three games. Del Potro admitted he felt powerless after the match, “I can't do nothing in the match… He's Roger Federer. If you don't be good, you lose.”

Feelings of negativity can affect professional and club players alike when facing someone they idolize or look up to. Marc Sagal, The Winning Mind, explains that these matches present extra challenges, “One obvious challenge involves being 'star struck' and not feeling worthy of winning. Certainly the first match against one's 'idol' can feel surreal and intimidating.” Adam H. Naylor, EdD, Telos Sport Psychology Coaching, agrees, “The challenge is the distraction of acting like a fan rather than an athlete.”

Some players, conversely, see the matchup as an opportunity to play without pressure. “The opportunity can be seen as a gift, and one in which there is mostly upside and actually less pressure to win - something that can help players focus and enjoy playing. Players can find themselves inspired by their idol and elevating their own game to match the quality of someone whose style and success they admire,” Sagal says.

Regardless of whether a player relishes the opportunity to play their idol or is overwhelmed by fear, mental strategies can be used to overcome inevitable nerves. Frank Giampaolo, mentalemotionaltennisworkshops.com, knows that controlling your brain can be just as important as shot selection or game plan. “Matches are blown when players let their mind wander,” he says. “They're untrained in controlling their thoughts, so their thoughts control them.” Giampaolo explains that the two sides of your brain can work against each other. “The left side of your brain is the ego/editing side. This is where thoughts such as 'You can't beat this guy' or 'Watch me find a way to blow it now' come from. The trick is to stay far away from that little devil in the left hemisphere of your brain. Control your left side, and you control your performance.”

The challenge is the distraction of acting like a fan rather than an athlete.

Controlling feelings is essential to a successful performance. Sagal recommends practice in controlling thoughts just as you would your tennis. “Spend time thinking about the feelings that are likely to be generated at various times before and during the match and rehearsing how best to manage those emotions in order to stay focused, composed and confident.”
Thoughts must be controlled even when the ball isn't in play, and Giampaolo suggests giving the brain “a place to go” in between points and during changeovers. “In tennis matches, it's estimated that about 80 percent of the time that players are on court they are in between points or changing over. The ball is only in play about 20 percent of the time…Top players
stay composed by keeping their brain occupied in the ‘down’ time,” he says.
Elite players are less inclined to make repeated mistakes. For instance, del Potro bounced back from his lacklustre performance to beat Federer over five sets and claim the US Open title that same year, 2009. The Argentine’s comeback is an inspiration for players of all levels when they come up against someone they revere. Playing an idol is a potential challenge for anyone, but with the correct physical and mental preparation, the match can be approached with positivity and confidence.
Tweet
Tweets by @tennisviewmag