It is safe to say that with the possible exceptions of mask producers and telecommunication companies, there have been no winners during this pandemic.  Tennis has been no exception.  From players to the fans and everyone else who makes the sport possible, all have missed the regular competition of the tour.  Exhibitions have been there to fill the void, however, and if there is one that has particularly benefited from the tour hiatus, it is World Team Tennis.

Unlike a number of the exhibitions that have taken place over the last couple of months, World Team Tennis has been around for several decades.  Founded by Billie Jean King and played in the summer leading up to the US Open, this mixed-team competition was designed to be an enticing and enjoyable experience to even the most casual of sports fans.  It features faster-paced and cumulative scoring, lets are in play, and fans are allowed to be exceptionally noisier than what is typically permitted at regular tour events. 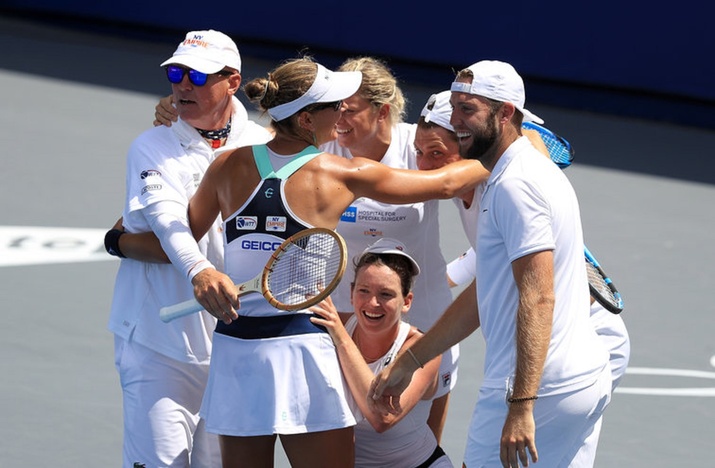 Sadly for this creative exhibition, it has become increasingly marginalized over the years.  Played in multiple cities in different times zones and often featuring mediocre rosters, it has proven challenging to drum up interest from folks not from one of the host cities.  Getting fan support has also proven difficult as coverage of World Team Tennis would often take a backseat to broadcasts of regular tournaments.

That has all changed in 2020.  Looking to get in as much play as possible prior to the resumption of the tours, there are more established names sprinkled throughout the various teams.  Desperate for live sports, broadcasters have also made coverage of World Team Tennis readily available on a plethora of platforms.  Furthermore, with all teams located in one spot for safety reasons, it has made the scheduling of coverage that much more fan-friendly.  As an added element of enjoyment, with no line people and ball kids on the court, fans have been entertained by watching non-playing teammates shag balls and everyone gets involved with on-court coaching.  All told, this year's edition of World Team Tennis has enjoyed some of its best exposure in quite some time.

World Team Tennis is unlikely to see this same level of favorable exposure in the seasons to come through and in all honesty, it should not.  The host cities associated with the teams want to actually host them at home, so that will inevitably lead to more complicated broadcast scheduling.  The additional travel combined with it occurring in conjunction with regular tour events means that the rosters are once again going to take a bit of a hit.  And while players might still like to see the electronic line-calling used in lieu of lines people, most would agree the ball kids should have the opportunity to be out there among the players.  Of course, it would not hurt to still allow the players to be court-side to coach and cheer on their teammates.

Yes, the amount of attention afforded to World Team Tennis in 2020 was an anomaly, but they have made the most of it.  They have simultaneously given fans something to enjoy during the hiatus while also demonstrating that large groups of players can still safely compete in the current environment.  Perhaps most importantly of all, this season's edition reminded everyone that World Team Tennis is still here, helpings fans to discover – or possibly re-discover – the joy of this historic exhibition.  With any luck, it will pay dividends for this competition to the maximum extent possible in the years to come.