Stan Wawrinka, a three-time grand slam champion, dispatched his 18-year-old opponent, Jannik Sinner in straights in his first tournament since the US Open. Sinner, currently ranked #119, received a wild card into the European Open, a 250 level ATP event and bulldozed his way into the semis defeating world #53, Francis Tiafoe, and world #13, Gael Monfils in the previous two rounds.

The 34-year-old from Switzerland was quite familiar with the Italian teenager having played for the first time in the first round at Flushing Meadows just two months ago. That four-set battle, however, was far more competitive than today’s encounter.

Sinner, having won the toss, elected to receive and it paid off; Wawrinka dropped serve following four unforced errors off the ground. The 6’2 Italian with easy power and good technique off both sides, held easily to 15 for 2-0. Sinner found success employing the backhand down the line to open up the court often finishing with the inside-out forehand.

Wawrinka regrouped nicely, striking three aces to hold to 30 for 1-2. Sinner may lack the power on the serve that his opponent possesses but he typically hits his spots. In the fourth game, however, he missed 5/8 first serves and it cost him, dumping serve after missing a routine volley.

Wawrinka was dialed-in as he continued to serve big and crush the forehand to hold at love for 3-2. Sinner struggled with his first serve and his opponent’s slice as he dropped serve for the second time. 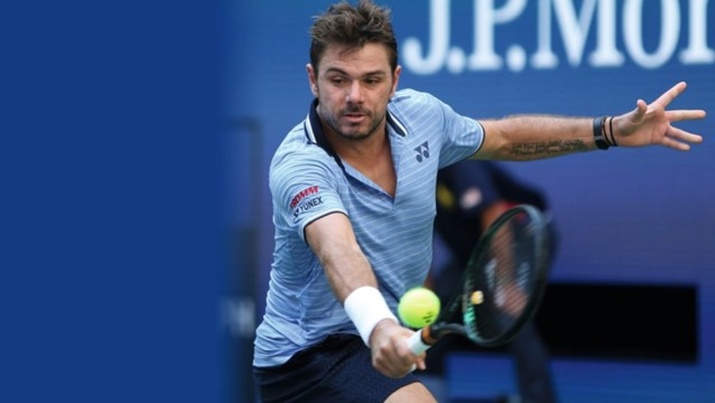 Sinner served first in the second and immediately came under pressure, facing triple break point. The teenager acquitted himself well, battling back to deuce but failed to hold serve as his inside-out forehand sailed wide.

Wawrinka, his foot firmly on the gas, once again held at love for 2-0. Sinner, upping his first serve percentage, held to 30 for 1-2. Wawrinka, despite donating a double fault and facing a break point, held serve with an ace and a fantastic forehand winner on consecutive points.

Sinner, serving at 1-3, labored to find momentum off the ground as his opponent brilliantly mixed up the slice with topspin off both wings to extract errors. In addition, he employed the lob to great effect as the Italian liked to close tight to the net.

Sinner faced double break point and dropped serve when Wawrinka crushed two forehands down the line on consecutive points, the last off the return.

The Swiss sensation, continued to serve well, holding to 15 for 5-1. Sinner, serving to stay in the match, demonstrated remarkable poise and focus, holding at love for the first time in the match.

Wawrinka, opened with an ace and quickly reached 40-0, triple match point. He needed just one and in little more than an hour, reached the final. He successfully utilized not only the slice, but his vast experience to out-wit and maneuver the young upstart.

Though they both had the same first serve percentage at 78, Wawrinka won an astounding 81% of first serve points compared to just 51% for his opponent and maintained the advantage of earning free points behind his powerful first serve including 8 aces.

His final opponent will either be another three-time grand slam champion, Andy Murray, or another NextGen standout, 21-year-old, Ugo Humbert of France.