Wawrinka’s Revenge Over Raonic In Rotterdam

Although he led Milos Raonic 4-3 in their head to head, Stan Wawrinka, the three-time grand slam champion, had lost the last three including a four, tie-break sets loss earlier this season at the Australian Open.

The former world #3, currently ranked #68, is continuing his road to recovery following two left knee surgeries in August of 2017. Raonic had achieved a career high ranking of #3 in 2016 following his run to the Wimbledon final. He is currently ranked #14 as he strives to remain healthy in a still burgeoning career often plagued by injury.

At the ATP 500 event in Rotterdam, the thirty-three-year-old Swiss moved remarkably well, hovering the baseline as he struck formidable shots off both wings. Wawrinka drew first blood in the third game of the first set as he continued to apply pressure from the back of the court. Raonic, in order to shorten the points, repeatedly came into net and was quite successful but was broken when a forehand missed wide.

Wawrinka faced his only break point of the match in the next game when he overcooked a forehand. He leveled to deuce following an incredibly long and scintillating rally and held with an ace down the middle. 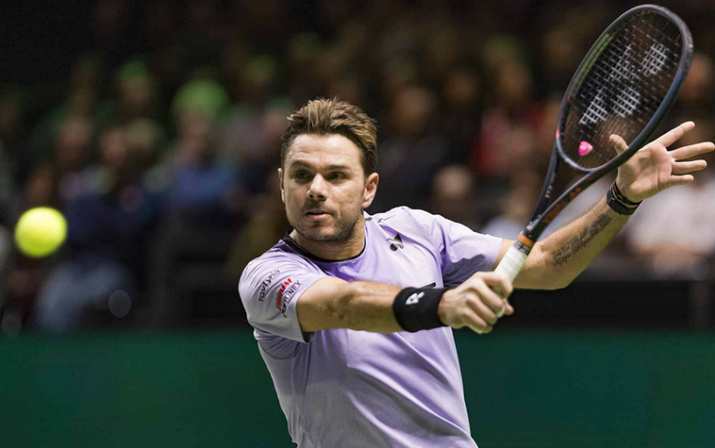 The twenty-eight-year-old Canadian continued to struggle on serve while Wawrinka often held to love or 15. Raonic, despite serving two aces and holding at love in the ninth game could not level the match; Wawrinka closed out the set 6-4 when the Canadian whiffed the return.

Raonic served first in the second set and held with an ace up the tee. In his following service game he struck two aces to lead 2-1. Wawrinka returned the favor in the next game, unleashing two huge aces to hold at love.

Wawrinka continued to pummel Raonic from the baseline with his signature shot – the backhand down the line. The Canadian often appeared rushed and struggled to track down balls when pushed wide.

Raonic, currently working with the 2001 Wimbledon champion Goran Ivanisevic, took every opportunity to approach the net and while effective, was passed often and on both sides.

They remained on serve through twelve games and the Canadian served first in the tie-breaker. Down a mini-break following another forehand winner from the Swiss #2, Wawrinka gave back the break with his first double fault of the match.

Level at 2-2, Wawrinka unloaded on another back hand down the line service return winner to take the lead. Following a 17-shot rally that included sublime movement and ball-striking from both, Raonic found himself down 2-5 when he missed the volley.

Not to be outdone by his opponent, Stan the Man closed out the breaker and the match with an amazing cross-court forehand winner and finished with 27 winners to 15 unforced errors. He struck 8 aces and won an astonishing 91% of first serve points and 67% on second serve points.

In the following round he will either face another Canadian, the lefty nextgen superstar, Denis Shapovalov or the resurgent veteran, Tomas Berdych.