The Miami Masters is quickly heading towards a close, and while tongues have been set to wagging with what has already occurred and will continue to do so with what is yet to come, there has been one topic steadily capturing the focus of many.  It is the use of the underhand serve, which has sparked a debate among fans and pundits alike.  It is an intriguing topic and one that may not be going away any time soon.

The topic has gained attention since Nick Kyrgios used it first against Rafael Nadal in Acapulco and then earlier this past week in his victory over Dusan Lajovic.  It had some crying foul, insisting that the Australian was showing a lack of respect to his opponent by utilizing that shot.  Still others, including Roger Federer, Judy Murray, and even Nadal, have insisted they saw nothing wrong with it.  It makes for an interesting debate, but all told, the underhand serve probably is not being given a fair shake by those who oppose it. 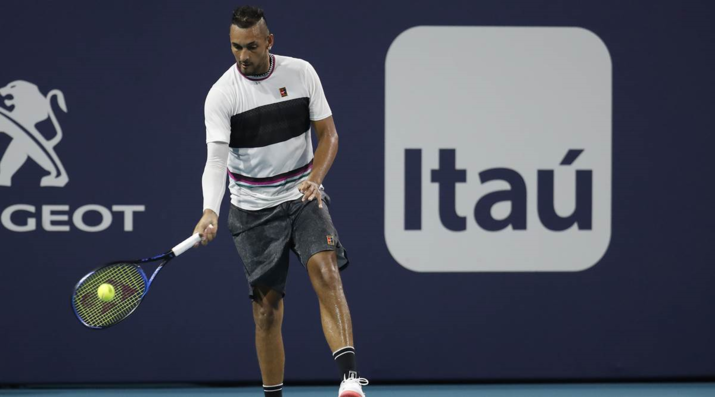 For one thing, if a player learns to strike that serve properly, it can be very effective.  With some players opting to practically plant themselves in among the spectators to return serve, serving short and soft in the box could prove far trickier for the opponent to return than a powerful overhand serve that comes to the returner.  Additionally, just as a big ball-striker's drop-shot can be quite effective due to the opposition having to respect the firepower they bring to the table, an underhand serve could provide a comparable service for the biggest servers in the sport.  If an opponent is looking for the 140-mph bomb, they are going to be caught that much more off guard by the soft dink over the net.

Strategy aside, those who frown upon the underhand serve suggest that while it is technically legal, there is an unwritten rule that one should not employ that serve unless under severe physical distress, such as when Michael Change famously struck the underhand serve on his way to victory over Ivan Lendl at the 1989 French Open.  The thing is, there are other strategies used in tennis that are technically also within the rules that frankly should be considered far more egregious and happen far more frequently.  How often do fans see players take the infamous bathroom break (often times for what seems well beyond a reasonable amount of time) as a means of recovering from a lost set and trying to disrupt their opponent's momentum?  There are also the questionable trainer visits that inevitably occur over the course of the season.  These, too, are technically within the rules but are strictly unsportsmanlike methods to try and achieve victory.  At least the underhand serve requires skill and actually involves the player competing to secure a point.  Furthermore, as a side note, for those out there who support playing lets, there is no reason for them not to support the underhand serve.  A let happens by pure chance.  The underhand serve, again, takes skill and practice.

Lastly, it is worth asking the question if this would be such a hot debate if it were not for the specific player who has put this particular stroke back in the spotlight.  Kyrgios is the so-called “bad boy” of tennis, and there is no denying that he has been his own worst enemy on more than one occasion.  This is the man who hits the unnecessary “tweener” and the “no-look” volley, because it appears, he at times is more concerned with entertainment value than the actual outcome of the match.  But would people be questioning the use of the underhand serve if it were Federer, Nadal, or Novak Djokovic employing it over the course of a match?  Probably not.  Everything they have achieved in the sport adds a certain level of legitimacy to what they do, including their choice of tactics, such as Federer's SABR to use the term coined by Brad Gilbert.  But it should not matter which player is employing the tactic if it is within the rules and strategically makes sense.

It could be interesting to see where this debate goes and if more underhand serves will be witnessed throughout the season.  Kyrgios is not one to shy away from the controversy of utilizing it, and honestly, with as huge as his serve is, it is a great surprise tactic for him to pull out every now and then, especially against the players that stand so far back to return.  It should be entertaining to witness if others take a page out of his book and what changes it might lead to in tennis.