US Open: Rublev Gets Revenge For Loss To Berrettini

It was déjà vu for Matteo Berrettini and Andrey Rublev as they met in the 4th round at the 2019 US Open. Berrettini, the 24-year-old from Italy, won that match in straights and reached the semifinals, losing in straights to Rafael Nadal.

Although Berrettini led the head to head 3-1, he knew he was facing a confident opponent as Rublev claimed back to back titles on hardcourts (Qatar, Adelaide) at the start of the season. This match was hotly anticipated as neither player had dropped a set in the previous three rounds.

Rublev, the 10th seed from Russia, just twenty-two years of age, was seeking his second quarterfinal appearance at the Open having reached that round as a teenager in 2017.

It initially appeared as if history was going to repeat itself as Berrettini, having won the toss, elected to receive, and earned a break point with a well-struck slice backhand. After donating a double fault and facing three deuce points, Rublev remarkably held with an ace up the tee.

Berrettini, the #6 seed, opened his first service game with two huge groundstroke winners on consecutive points. Although he reached 40-15, he faced a deuce point before holding for 1-1 with a massive forehand down the line winner. 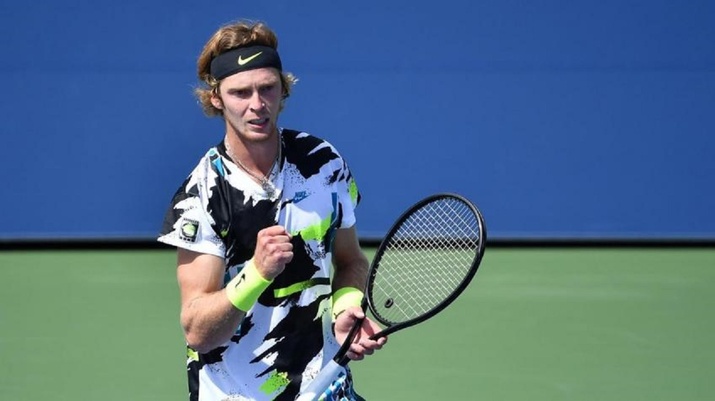 Rublev, soon faced double break point after his second double fault and two unforced errors off the ground and dropped serve when his opponent ripped the forehand down the line.

Berrettini, serving big, continued to employ the slice backhand and inside-out forehand to great effect to consolidate the break for 3-1. Rublev also unloaded on the forehand and held to 30 for 2-3 following two unforced errors from Berrettini.

The Italian held easily to 15 as he hit a fantastic forehand down the line and his first ace of the match. The Russian, down a break at 2-4, opened with a double fault and despite missing a couple of first serves, held to 30 with his second ace.

Berrettini, serving with new balls, went 3/6 on first serves and gifted his first double fault but held to 30 with a 130mph serve up the tee.

While both strive to dictate off the ground with their forehands, Rublev’s two-handed backhand is more effective than Berrettini’s but when he employs the slice backhand, he often extracts errors from the Russian.

Rublev, serving to stay in the set at 3-5, overcooked an inside-in forehand and threw in a double fault on consecutive points to go down 0-30. Berrettini earned double set point following a blistering backhand down the line return winner.

Rublev received a time violation after a grueling and enthralling 27 shot rally which he won. Despite facing four deuce and four set points, he held for 4-5 when Berrettini netted a backhand.

Berrettini, serving for the set, reached double set point, his sixth overall, following an extraordinary forehand down the line and backhand volley winner on consecutive points and took the set 6-4 when Rublev’s crosscourt forehand went wide.

Although he lost the opening set on one break of serve, Rublev competed well and kept it close. He served first in the second and held to 30 when his opponent misfired on a inside-out forehand. Berrettini missed 4/5 first serves but held to 30 following three unforced errors from Rublev on consecutive points.

Level at 1-1, Rublev opened with an ace down the middle and held to 30 with a huge serve, forehand down the line and backhand volley winner on game point. Berrettini went 3/6 on first serves and it cost him as he dropped serve following four unforced errors including two on poorly attempted drop shots, his Achilles heel in the making.

Rublev, in the zone and hitting with abandon, consolidated the break and held at love for 4-1. The Italian, a bit dazed and confused by the abrupt change in momentum, regained his composure, if only temporarily, and held to 15 behind well-struck serves and formidable inside-in forehands.

Rublev, serving with new balls, continued to hit them over 120mph and held to 15 for 5-2 with an ace out wide. The Italian, serving to stay in the set, held to 15, forcing his opponent to serve it out. Rublev, despite missing 3/6 first serves, held to 30 and closed out the set with a huge serve out wide.

Berrettini served first in the third and immediately came under pressure as his first serve went MIA. Although he faced three deuce and one break point, he held utilizing his fearsome forehand to gain the advantage.

Rublev held easily to 15 for 1-1, striking his 5th ace of the match and a monster serve out wide on game point. Berrettini opened with a double fault and dumped serve when Rublev, hitting behind him, extracted the error.

The Russian, supremely confident and dialed in, held at love for 3-1. Berrettini, seemingly always playing catch-up, returned the favor, holding at love behind three consecutive first serves and a well-struck forehand down the line.

Rublev missed 3/5 first serves but held to 15 for 4-2 with his 6th ace. Berrettini, serving with new balls, opened with an exquisite lob winner and although he threw in his third double fault, held to 30 with a titanic serve up the tee.

Berrettini, serving to stay in the set at 3-5, opened with an ace out wide but after one deuce and three set points, relinquished the set as he succumbed to his opponent’s relentless barrage.

Rublev opened the fourth and held to 30 with an ace up the tee. Berrettini, looking to gain some traction and restore his confidence, struck two aces and a spectacular forehand down the line and held to 15 for 1-1.

Rublev, keeping his foot on the gas, held at love hitting a 127mph ace. Berrettini, battling himself as well as his opponent, struck another ace and held for 2-2 despite facing a deuce point.

Rublev undoubtedly lost focus in the opening set after complaining about the balls and the lights not having been turned on. He quickly reset, dominating his opponent with his aggressive play and unwavering focus. Behind well-struck serves and outstanding crosscourt and inside-in forehands, Rublev held to 30 for 3-2.

Berrettini whiffed a forehand after an extended rally for 0-15 and soon faced two break points and dropped serve when he butchered a makeable forehand and slice backhand on consecutive points.

Rublev, serving with new balls, faced a break point when Berrettini’s return jammed him but held when his opponent’s forehand down the line went wide.

The Italian, serving to stay in the match at 2-5, pumped up the volume as he struck a 130mph serve and 125mph serve on consecutive points and held to 30 when Rublev netted a backhand volley.

Rublev, serving for the match and a coveted spot in the quarterfinals, benefited from another slice backhand error from Berrettini and with a 129mph ace out wide reached triple match point. He needed only one as he uncorked a mindboggling backhand down the line winner to close out the set and match.

The Russian played a near flawless match against on a worthy adversary who was not quite at his best. Rublev finished with 9 aces to 4 double faults, 34 winners to 28 unforced errors, 85% of first serve and 49% of second serve points won and was 4/9 on break points.

Berrettini did not serve badly but had ten more errors than winners and converted just 1/8 break points. In the end it was the Russian who played more aggressively and consistently, maintaining a high level of intensity over the course of the match.

Next up, and all-Russian affair as the world #14 takes on world #5 and 2019 US Open finalist, Daniil Medvedev.