US Open: Rogers Reaches Third Round

Rogers dismisses Kuzmova 7-5, 6-1 to reach US Open 3rd round

Shelby Rogers from Mount Pleasant, South Carolina is currently ranked and seeded #31. She entered the final slam of the season with excellent preparation having reached the final in San Jose (l. to Kasatkina) and the 4th round in Cincinnati (l. to Sabalenka). Rogers clearly has an affinity for hardcourts, especially those in New York having reached the quarters in 2020 and the 4th round last year.

Her opponent, Viktoria Kuzmova from Slovakia, came thru qualies and was playing with an abundance of confidence having defeated the always formidable Sara Sorribes Tormo in straights in the previous round. The twenty-three-year-old is currently ranked #183 but reached a career-high ranking of #43 in 2019.

Rogers won the toss and elected to receive. Both sought to utilize their powerful serves to initiate first-strike tennis. Kuzmova may have missed 4/8 first serves but the four she made were aces as she held for 1-0. Rogers lost the first two points in her opening service game but rebounded nicely, striking her first ace to level at 1-1.

Kuzmova lost the first two points to open the third but with well-struck serves, held to 30 for 2-1. The 29-year-old American feeling pressure off the return, donated a double fault, faced triple break point, and dumped serve following two consecutive winners from her opponent.

Kuzmova opened with an ace up the tee and consolidated the break for 4-1 after Rogers overcooked a forehand return. Rogers opened the 6th with an ace out wide and a brilliant backhand down the line as she held at love for 2-4.

Kuzmova, however, could not maintain the momentum as she gifted a double fault and following three break points dropped serve when Rogers ripped a forehand down the line.

Rogers, serving with new balls, opened with an ace and though she missed the following four first serves, held comfortably to 15 to level at 4-4. Kuzmova could only watch as Rogers struck an exquisite lob on the opening point and then lost the second with a double fault. Unquestionably frustrated with the loss of the lead and her serve, faced double break point and dumped serve with another double fault.

Rogers, seemingly in command and serving for the set after a shaky start, faced triple break point and gave back the break when she missed wide with the backhand. Kuzmova cracked a huge serve and crosscourt forehand to reach 30-15 but soon faced break point following another double fault and dumped serve when she mishit a backhand. Rogers hit two aces, an unreturnable and an inside-out forehand to emphatically close out the set at love 7-5.

Kuzmova dejected and a bit disgusted, served first in the second and held to 30 for 1-0 while Rogers opened with a double fault but hit an ace out wide and a blistering backhand down the line to level at 1-1.

Kuzmova continued to struggle on serve, donating two additional double faults, and faced two break points before dumping serve when she overhit a crosscourt backhand. Rogers continued to roll hitting freely off the ground with the inside-in and inside-out forehand as she held at love for 3-1.

Kuzmova missed 3/6 first serves including another double fault and dropped serve for the second time when she netted a forehand off Roger’s wicked slice backhand. 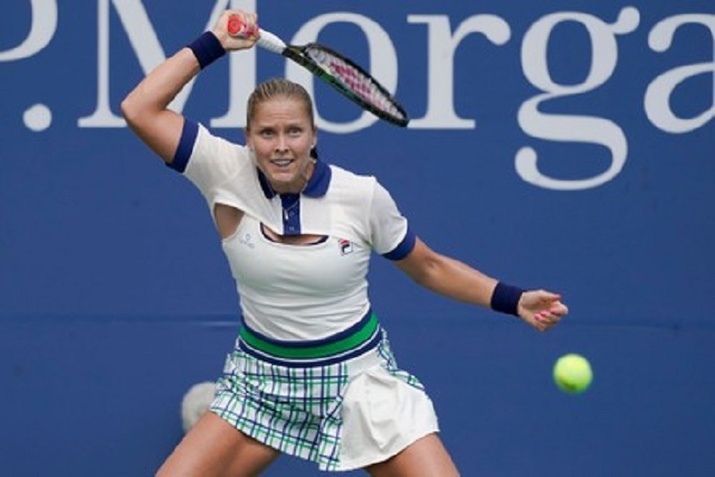 Rogers hit her 7th ace of the match and though she faced a break point following an outstanding crosscourt backhand from Kuzmova, battled and held for 5-1 with a monster serve out wide. Kuzmova served to stay in the match but soon faced double match point and lost serve and the match when she netted a makeable backhand.

Next up, the 5th seed and 2022 Wimbledon finalist, Ons Jabeur. Though they have not played since 2019, the world #5 leads the head-to-head 2-0 both on hardcourt and competitive. This has all the makings of a blockbuster third-round encounter and should not be missed.