There are signs of life in the world of professional sports as a number of different leagues are starting to return to varying levels of competition.  Tennis is thankfully among them, as a series of events and exhibitions featuring limited player fields have begun to get underway.  This has allowed some to ease back into competition, and in some cases, earn a little cash.  But even as these positive signs begin to emerge, there is also possibly some controversy brewing down the line.

At the time of this writing, the official return of professional tennis remains set for the first week of August, though that date is still very much up in the air.  Even so, snippets of information that have slipped out from players and the USTA itself all suggest that the USTA is looking to do everything in its power to ensure that the US Open is held in some way, shape, or form.  What form it potentially takes has players divided and could cause a rift between the “haves” and the “have-nots” on both tours. ​ 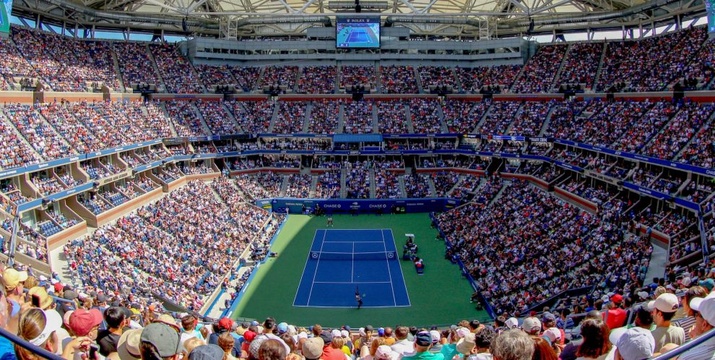 Officially, New York City was among those hardest hit by the Covid-19 pandemic, and as a result, the USTA has essentially resigned itself to the fact that if the US Open is going to be staged in New York like always, it will likely have to be done without fans.  Additionally, in an effort to further limit the number of people on site, players would be allowed a minimal number of team members to travel with them, possibly even seeing that team number whittled down to just one other member.  Chartered flights, designated lodgings, and regular virus testing could also be put in place.  Comments from Novak Djokovic, Rafael Nadal, and Darren Cahill among others appear to corroborate this line of thinking by the USTA.  While the top players understand the tournament's need to go on, they were naturally dismayed by these conditions and questioned if they would play under such restrictions.

An aversion to playing under these conditions has not settled well with some of the lower rank and file, however.  Dan Evans and Danielle Collins were among those who called out Djokovic for lamenting not being able to travel with his normal “entourage” as Collins put it.  And to be fair to them, it is easy to see their point.  Unlike the megastars of tennis, many players rely on prize money as the crux of their income.  Most of them do not normally have large teams either, because they cannot afford to under the best of circumstances.  Not surprisingly, the idea that a tournament with a large prize purse should be canceled just because of less-than-ideal but temporary restrictive conditions, including the possibilities that the top stars would have to reduce their teams or miss playing in a stadium full of adoring fans is frustrating.

Further muddying matters is the French Tennis Federation, which already postponed Roland Garros from its normal slot in May, equally as determined as the USTA to ensure their major takes place in 2020.  Although there is now a little more time between the start of Roland Garros and the scheduled conclusion of the US Open, the two majors may find themselves in a competition to provide the most enticing conditions safety precautions will allow if players look poised to choose between playing one or the other.  With most of the top players residing in Europe, that already puts Roland Garros at an advantage. ​

If all that were not enough, the remaining tournaments on the calendar find themselves in a bind.  Of course, all of them would ideally like to go on if at all possible, but financial considerations have to be made as to whether it is more lucrative to go forward in a limited capacity or cut losses and cancel altogether.  If the US Open is a go, how much more pressure does it put on the traditional warm-up events to find a way to do the same?  Will officials look to stage all or some of the normal clay tune-up events heading into Roland Garros, and if so, what does that do to the tournaments already slotted for those weeks?  Perhaps most importantly, will the players – particularly the marquee players – commit to contesting any premier events that do go forward for the remainder of 2020, especially if they do not like any of the precautions deemed necessary that may be put in place?  If not, how compelled are those events going to be to move forward without their star attractions?​

There are no easy answers to these questions.  Players may be eager to return to competition, but not all are willing to compete under the same set of conditions and restrictions.  Right or wrong, certain tournaments and players have more clout than others, and as such, could play a larger role in determining what events, if any, go forward.  In short, though most would desperately love to see the 2020 season salvaged, they are not all on the same page as to what that looks like.  Officials and players must navigate some murky waters if they want to come out on the other end of this with as few hard feelings as possible, and that will by no means be a walk in the park.