This was their first tour-level meeting with a coveted spot in the third round up for grabs. Taylor Fritz, twenty-three years of age and world #42, achieved a career-high ranking of #24 in March 2020.

Fritz was 20-16 on the season, including a five-set loss to Novak Djokovic at the Australian Open. He performed well during the summer hardcourt swing, reaching the semis in Los Cabos and Atlanta, losing both to the eventual champion. Fritz was hoping to equal his best performance at the Open, having reached the third round twice (2018 & 2020).

Jenson Brooksby, just twenty years of age, is enjoying a breakout season having won three tournaments on the Challenger Tour and qualifying for the main draw at the French Open before losing in the first round to world #26, Aslan Karatsev.

The highlight of his young career was reaching the final on grass at the Hall of Fame Open, an ATP 250 event (l. Anderson). Brooksby began the year ranked 310 and now astonishingly, is #99. He played exceptionally well on the hardcourts in Washington, DC taking out Kevin Anderson, Francis Tiafoe, and Felix Auger-Allassime before losing in the semis to world #24, Jannik Sinner. 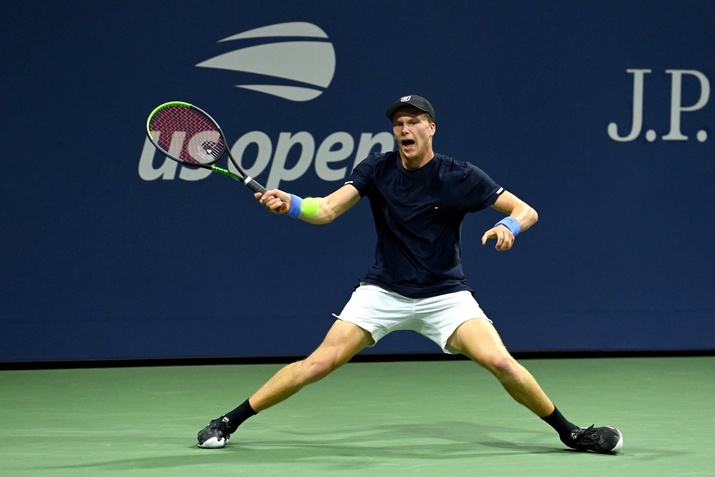 Fritz served first and comfortably held to 30 for 1-0 and Brooksby returned the favor, leveling at 1-1. The 23-year-old American struck his first ace and held easily to 15 for 2-1. Brooksby, not as big a server, struck a 112mph serve out wide as he held to 30 for parity.

Level at 4-4, Fritz found his groove on serve, striking two additional aces and a monster one on game point for 5-4. Brooksby, serving to stay in the set and feeling scoreboard pressure, faced set point when Fritz pummeled a backhand crosscourt but managed to hold despite a 77mph second serve.

Level at 5-5, Fritz found holding arduous as he missed more than 50% of first serves. He faced five deuce and four break points yet held with his ninth ace on game point. Brooksby, needing to hold to force the tiebreaker, did just that when Fritz netted a backhand.

Fritz served first and gifted a double fault. They were level at 6-6 when they changed ends. It was anyone’s guess who would take the breaker as both are aggressive baseliners and beasts on defense. Fritz struck a huge serve and a terrific inside-in forehand for 7-6 but gifted the following point when he whiffed a forehand volley. Fritz secured the breaker 9-7 following an unforced error from his opponent and a crisp forehand volley winner.

Very little separated these two young men as the second set mirrored the first. Brooksby served first and after utilizing every angle of the court and extracting a forehand error, held to 30 for 1-0. Fritz opened with a forehand winner and closed with an ace up the tee for 1-1.

Brooksby donated four unforced errors and faced break point but held for 2-1 with well-struck serves and a forehand down the line. Fritz, serving with new balls, held easily to 15, striking his 11th ace on game point. Brooksby, dialed in and relentless off the ground, held to 15 when Fritz’s backhand went wide.

Fritz struck another ace and with a spectacular crosscourt backhand, held at love for the first time. Brooksby also held easily, striking a big serve up the tee for 4-3. Fritz was 5/5 on first serve and held to 15 for 4-4. Brooksby held comfortably to 30 for 5-4, just four points from leveling the match.

Fritz, however, refused to yield, playing within himself as he held at love for the second time. Brooksby upped the ante, making 4/5 first serves as he held to 15 to lead 6-5. Fritz, serving to stay in the set and force the breaker, endured rough seas as he missed 6/10 first serves and faced double set point yet held with a very lucky 13th ace and an extraordinary forehand down the line winner on game point.

Fritz reached set point at 10-9 with an amazing inside-out forehand but Brooksby leveled with a brilliant backhand down the line following an epic rally. The crowd, on the edge of their seats and chanting for both, was admonished by the chair for shouting during points.

Brooksby reached set point for the third time when Fritz misfired on the forehand and sealed the breaker 12-10 when Fritz netted a backhand following a marathon 34 shot rally.

The third set did not disappoint as both continued to swing from the rafters. Fritz faced a break point in his opening service game but held behind an overhead smash, massive serve, and a crosscourt backhand winner.

Brooksby held to 30 for 1-1 while Fritz held at love for 2-1. Brooksby struck his first ace of the match and held for 2-2 with a colossal forehand down the line. Fritz, blasting the ball off both wings, once again held at love for 3-2.

Brooksby served effectively as he held easily to 15 for 3-3. Fritz missed 4/6 first serves and faced 0-30 but held for 4-3 with an ace out wide. Brooksby faced double break point following an outstanding inside-out forehand return and faced two more in addition to six deuce points yet held for 4-4 after ten plus minutes!

The crowd was hoping for another tiebreaker as both continued to compete at the highest level. At 5-5, Fritz blinked first as he gifted Brooksby three consecutive forehand errors to drop serve. Brooksby clinched the third with an exclamation point, striking his third ace on set point.

Fritz, frustrated and a bit dejected, dumped serve with a double fault to open the fourth. Brooksby consolidated the break for 2-0 while Fritz held at love with a backhand down the line for 1-2. Brooksby once again held easily for 3-1 while Fritz donated another double fault and dropped serve when Brooksby’s drop shot dribbled over the net.

Brooksby, smelling blood and the third round, opened with a 113mph ace, and held for 5-1. Fritz, serving to stay in the match, faced four match points but with spot serving and well-struck forehands, held when Brooksby whiffed the return.

After four hours and with new balls, Jenson Brooksby served for the match and earned his place in the third round when his opponent’s forehand pass went wide. This was an enthralling, competitive, high-quality match from two young gladiators.

It also was exceptionally close as both approximated 70% on first and 53% on second serve points and won 37% of receiving points. While they were equally effective at net, Brooksby was marginally better on break points, converting 5/19 compared to 2/10 for Fritz.

Though Fritz struck three times as many aces, he committed almost 30 more unforced errors. Next up for the twenty-year-old from Sacramento, CA, his French Open nemesis, Aslan Karatsev. The #21 seed from Russia, has also had a breakout season, reaching the semis down under and winning in Dubai. This promises to be another epic battle of aggressive baseliners and one to watch.