Kvitova conquers Pegula 7-6, 6-4 to give Czech Republic first win at the United Cup

Jessica Pegula the #1 American, took on the 2-time Wimbledon champion and lefty, Petra Kvitova on Day 2 at the United Cup. The Americans were hoping to wrap things up with a win while the Czechs were desperate to get on the board.

Pegula just twenty-eight years of age, ended the regular season on a high note winning her first WTA 1000 title in Guadalajara, Mexico catapulting her to a career high ranking of #3.

Kvitova now thirty-two, won on the grass in Eastbourne and reached the finals at the WTA 1000 event in Cincinnati, finishing the season ranked #16. Kvitova leads the head to head 2-1, though she lost their last match in straights in the fourth round at the US Open this past September.

Kvitova opened the fifth with an ace out wide and closed with a backhand swing volley and Pegula leveled when her opponent’s return went wide. Kvitova struck three consecutive winners to open the seventh and held at love when Pegula mishit a backhand. 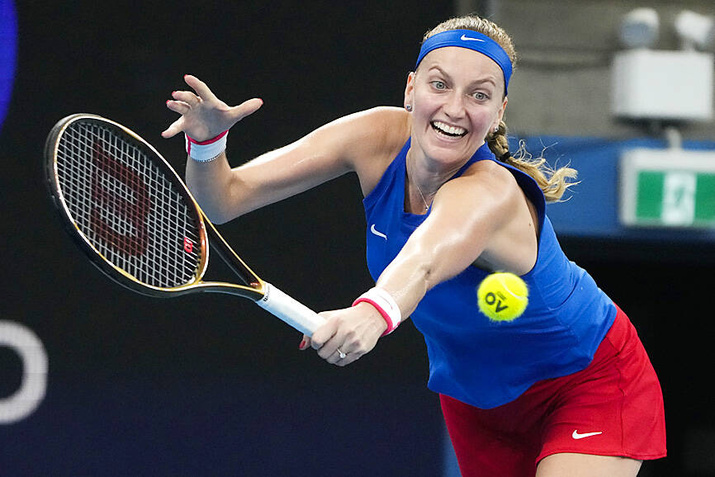 The American serving with new balls, struck her fist ace and with a forehand swing volley winner, held to 15 for 4-4. Kvitova had dominated the rallies with her aggressive court position and formidable groundstrokes but was in trouble when up 40-15 in the 9th game. She missed three consecutive first serves and faced three deuce and break point but managed to hold with a terrific backhand volley winner.

The tenth game alone was highlight reel worthy. Kvitova was looking to break to close out the set; Pegula reach parity. Kvitova reached set point at 30-40 when Pegula overcooked a backhand and earned a second with a remarkable crosscourt backhand but the American refused to surrender.

Kvitova continued to pummel the return but could not convert. Pegula faced seven deuce points and saved a total of six set points to hold when Kvitova netted the return.

Kvitova opened the 11th with her first double fault; not surprising after a grueling, tension-filled game with so many opportunities to break. As the unforced errors continued to accrue, she faced four break points and dropped serve when she netted a backhand stab volley.

The American with her teammates courtside rooting her on, served for the set. Pegula reached triple set point following two consecutive winners but faced break point, unable to counter her opponent’s pace. After two additional deuce and two break points, she dumped serve when she netted a backhand stab volley.

After two consecutive breaks of serve, they were level at 6-6. Kvitova served first in the breaker and quickly found herself down 1-5. It seemed inevitable that Pegula would secure the breaker and the opening set, but her opponent was on a mission.

Kvitova reached 3-5 with a fantastic return and overhead smash but a costly double fault gave Pegula two set points. Pegula returned the favor with her first double fault and found herself changing ends at 6-6 instead of sitting down when Kvitova executed a deft drop shot and crosscourt backhand.

The tension and excitement especially from the Czech bench were palpable as Kvitova stepped to the line to serve. In a matter of minutes, what seemed impossible was inexorable; Kvitova reached set point and converted following two consecutive errors from Pegula.

Pegula unable to shake off the tiebreak, dropped serve to open the second set. Kvitova missed 3/4 first serves yet held at love to consolidate for 2-0. Pegula faced a barrage of powerful returns and dropped serve when her opponent crushed a crosscourt forehand.

Kvitova gave back the break following three costly errors including a double fault on game point. Pegula emboldened by the sudden swing in momentum, fought off a break point and with an ace up the tee, held for 2-3.

It is often chaotic when the 2-time Wimbledon champion and former #2 takes the court due to the high-risk nature of her game. Never one to hold back, the errors often equal or surpass the winners. She opened the 6th with an ace but followed with a double fault. Despite the error she proceeded to uncork off the ground striking two impressive winners to hold for 4-2.

Pegula maintained her focus in the seventh or swing game, holding to love for 3-4 with an extraordinary forehand down the line. Kvitova made 3/6 first serves and with another forehand swing volley winner, held to 30 for 5-3.

Pegula serving to stay in the match, showed her mental fortitude as she once again held at love with two consecutive backhand down the line winners.