This was their first meeting on hardcourt and with so much at stake. Tsitsipas, the twenty-three-year-old from Greece, led the head-to-head 2-1, winning their last match last spring in straights on the dirt in Barcelona. Tsitsipas achieved a career-high ranking of #3 last August and is currently ranked and seeded 4th. He was looking to equal his best performance in Australia having reached the semis in 2019 and 2021.

Jannik Sinner, just twenty years of age, achieved a career-high ranking of #9 last November and is currently ranked #10 and seeded 11th. This was his best performance to date down under having never progressed past the second round.

Tsitsipas served first and despite donating a double fault, struck two spectacular forehands on the last two points to hold for 1-0. Sinner missed 7/8 first serves including a double fault and it cost him, dropping serve when he overcooked a forehand. Tsitsipas struck an ace up the tee and consolidated the break when Sinner’s forehand went wide. Sinner held at love for 1-3 behind two winners off the ground and well-struck serves.

The world #4 opened with an ace and with another well-placed serve, held to 15 for 4-1. The Italian made 3/4 first serves and once again held at love for 2-4. Tsitsipas, striking the ball with conviction, hit four outstanding forehands to hold to 30 for 5-2. Sinner, serving to stay in the set, opened with an ace and held for 3-5 when his opponent’s forehand went wide. Tsitsipas donated another double fault but with a crisp forehand volley winner and a colossal serve up the tee, secured the set 6-3.

Sinner served first in the second and with his second ace, held to 15 for 1-0. Tsitsipas opened with an ace and with another monster serve, held to 15 for 1-1. Although he made 4/6 first serves, the world #10 dropped serve when his opponent crushed another backhand crosscourt.

During a brief rain delay the roof was closed. Following the warm-up, Tsitsipas held to 15 for 3-1. Sinner once again held at love, hitting an ace up the tee for 2-3. Tsitsipas continued to dictate with the forehand, holding to 15 for 4-2 with a huge serve out wide.

Sinner opened with a fantastic forehand down the line pass and with another formidable one, held to 15 for 3-4. Tsitsipas continued to play with controlled aggression and with an overhead smash and an explosive crosscourt forehand, held easily to 15 for 5-3.

Sinner serving to stay in the set opened with a blistering crosscourt backhand and overhead smash and secured the game with a forehand error from his opponent. Tsitsipas, moving exceptionally well despite a five-setter in the previous round, closed out the set 6-4 with well-struck serves and an errant forehand from Sinner.
Sinner opened the third and held easily to 15 for 1-0. Tsitsipas maintained his laser focus as he held to 15 for 1-1 with an ace up the tee. Sinner struggled for court position and dumped serve when he netted a forehand. 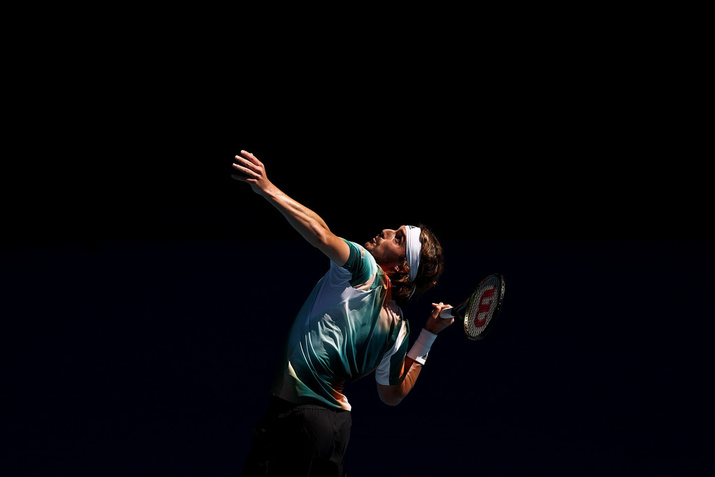 Tsitsipas hit four outstanding forehands including a volley winner to consolidate the break. Sinner looked lethargic as he once again dropped serve when his forehand went wide. Tsitsipas, closing in on the semifinals, consolidated the break at love with monster serves and an equally massive inside-out forehand for 5-1.

Sinner, serving to stay in the match, opened with an ace and held at love, forcing his opponent to serve it out. Tsitsipas opened with an inside-out forehand winner and after a little over two hours, secured victory when his opponent’s backhand went wide.

It was a clinical performance from the world #4. Playing with conviction and composure, the 2021 French Open finalist made the world #10 look like an amateur. Although Sinner won in straights in the previous round, he was flat and unable to adapt and alter his strategy to combat his opponent’s extraordinary level.

Tsitsipas was stellar on serve, winning 79% of first and 60% of second serve points. He converted 4/4 break points, won 33% of points when receiving and struck 30 winners to 28 unforced errors.
He will battle a familiar foe in the semis; Daniil Medvedev, the reigning US Open champion required five sets to subdue the young Canadian, Felix Auger-Aliassime. Medvedev dispatched Tsitsipas in straights in the penultimate round last year, so it is game on!

The world #2 leads the head-to-head 6-2 winning five of the six played on hard. This is sure to be an epic war of attrition and one I am anxious to watch.