Angelique Kerber, former world #1 and three-time grand slam champion was looking for redemption in the desert; in 2019 she lost a tight three-setter to emerging talent, Bianca Andreescu. The 34-year-old German who plays left-handed has been on the comeback trail as her ranking plummeted to twenty-five.

Her preparation for the current season was derailed after testing positive for Covid-19 in December. This was just her third event of the season, having lost in the opening round at the Australian and Qatar Opens. Kerber seeded and ranked 16th  was eager to reach the quarters at the Masters 1000 event for the sixth time.

Iga Swiatek, just twenty years of age, has had a remarkable ascent up the rankings. The Polish #1 claimed her maiden title at the 2020 French Open which had been rescheduled to September due to the Covid-19 pandemic.

With that remarkable achievement, she became the first Polish player in history to win at Roland Garros in addition, at #54, to being the lowest-ranked player in the history of the WTA rankings to win the title. Since then, she has won three additional titles-two at the Masters 1000 level-and achieved a career-high ranking of #4. 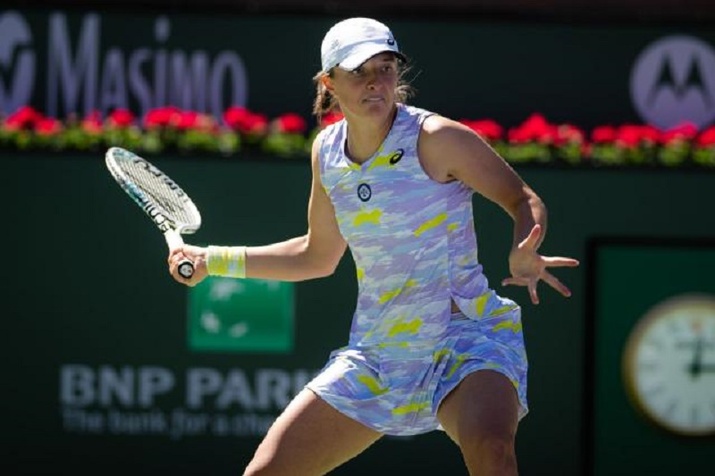 The former world #1 could not consolidate and gave back the break with a double fault. Level at 1-1, Swiatek struggled to find her rhythm as she faced three deuce and three break points yet managed to hold for 2-1 with a fantastic crosscourt backhand. Kerber had a much easier time, holding to 30 for 2-2 with a sweet backhand slice drop shot.

Swiatek continued to misfire on serve and after two consecutive double faults, dropped serve. Kerber, the 2019 Indian Wells finalist, consolidated the break for 4-2 despite donating another double fault.

Swiatek a bit edgy and flat struck four extraordinary forehands en route to holding for 4-5. Kerber once again served for the set and aside from another double fault, hit two spectacular inside-out forehands and secured the set when Swiatek missed wide with a crosscourt forehand.

Swiatek served first in the second and for the first time in the match, held easily to 15 for 1-0. Kerber donated four unforced errors including her 5th double fault and dumped serve when she netted a forehand.

Swiatek opened the third game with a double fault, and it was downhill from there as the 2020 French Open champion faced three break points and lost serve with an errant backhand.

Kerber returned the favor, giving back the break with her sixth and most costly double fault. Swiatek soon faced double break point and dropped serve with another error off the backhand. A fifth consecutive break of serve ensued as Kerber netted a poorly executed drop shot.

Swiatek serving at 4-2, finally flipped the script and accomplished the unimaginable; holding at love for the first time in the match! Kerber serving to stay in the set missed 5/6 first serves including another double fault and dropped serve and the set, unable to counter her opponent’s weight of shot.

Level at a set apiece, it was unclear whether these two talented and versatile champions simultaneously would play their best. While Kerber can unleash off both wings especially the forehand down the line, it’s her defense that sets her apart. Swiatek possesses the more powerful and reliable serve which enables her to dictate play and control the baseline with her formidable groundstrokes.

Swiatek appeared to have finally found her groove, striking her first ace as she held at love to open the final set. Kerber managed to hold to 30 for 1-1 even though she failed to hit one winner. Swiatek hit two incredible inside-out forehands on consecutive points to hold at love for the third time.

The three-time grand slam champion, however, could not consolidate and gave back the break. Swiatek, serving at 3-3 held to 15 to take the lead 4-3. Kerber, serving with new balls, was often on the back foot and dropped serve when she netted a forehand. Swiatek serving for the match and a spot in the quarters, secured victory with a huge serve up the tee.

There was nothing straightforward about this encounter. For the third time in this tournament, Iga Swiatek won after losing the opening set. She will need to clean up her game if she hopes to reach the semis. She hit 4 aces to 5 double faults, won 61% of first and just 48% of second serve points. She was, however, exemplary when returning serve, winning 52% of first and 61% of second serve points and broke eight times.

Next up, Madison Keys. The twenty-seven-year-old American is having a standout season. She won her sixth career title in January in Adelaide defeating Elina Svitolina, Coco Gauff, and Alison Riske in the final, and reached the semis at the Australian Open, losing to eventual champion, Ashy Barty. Keys is currently ranked #29 and is seeded 25th. This will be their second tour-level meeting and first on hardcourt, Swiatek winning in straights on the dirt in Rome last spring. Both are seeking their first semifinal appearance in the desert.