Elina Svitolina, ranked 5th in the world and the #3 seed, was seeking her third quarterfinal appearance at Roland Garros (2015, 2017), her opponent, her second (2017). Caroline Garcia of France, may have led the head to head 3-1, but today, in cold, windy conditions, her opponent took the lead in every significant stat.

Svitolina, all too familiar with Garcia’s resume, was prepared to dig in and if necessary, go the distance. Garcia reached a career-high ranking of #4 in 2018 but has since seen it plummet to #45. In this strange and abbreviated season, however, she has made great strides, earning notable victories over world #4 Karolina Pliskova at the US Open and world #18 Elise Mertens in the previous round at Roland Garros.

Garcia served first and quickly faced double break point and dropped serve when she overcooked the crosscourt forehand. Svitolina consolidated the break with an impressive love hold for 2-0. 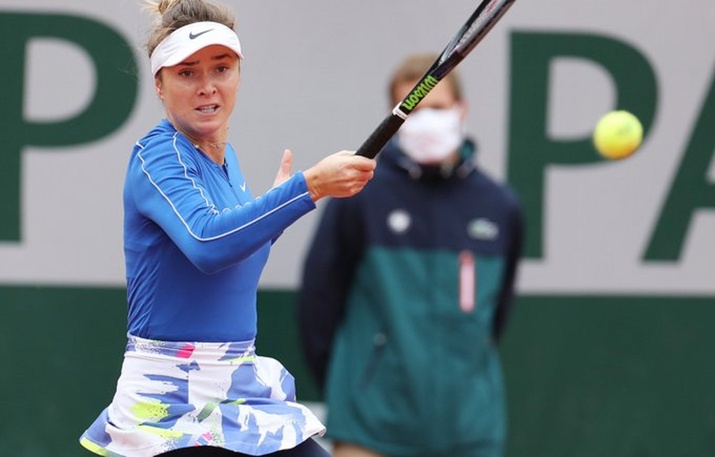 Garcia, on the verge of her twenty-seventh birthday, donated her second double fault and following yet another unforced error off the forehand, dropped serve. Svitolina, a year younger than her opponent and much more consistent off the ground, held at love for the second time for a commanding 5-1 lead.

Garcia was unable to dictate from the baseline in these tricky conditions and following two unforced errors off the ground on consecutive points, dropped serve and the set 1-6.

Svitolina from the Ukraine, served first in the second and once again held at love with exceptional movement and defense. Despite striking her first ace of the match, Garcia dropped serve following six unforced errors off the ground.

Svitolina, however, was unable to consolidate the break as Garcia hit an overhead smash and a forehand on the baseline on consecutive points to break for 1-2. Garcia, unfortunately, could not sustain the momentum as she gave back the break following a slew of errors off the forehand.

Svitolina, steady and patient, consolidated the break for 4-1 with an ace down the middle and an unreturnable serve on consecutive points. Garcia, the 2016 French Open doubles champion alongside compatriot Kristina Mladenovic, found success at the net, holding for 2-4 with a fantastic forehand volley winner.

Svitolina, held at love for the second time and was now just four points from the quarterfinals. Garcia, determined to force her opponent serve it out, did just that as she held easily to 15 for 3-5.

Elina Svitolina served for the match and a spot in the French Open quarterfinals. In a little over an hour, she approached the net to greet Garcia as her return went wide.

This French Open, like all of 2020, has been extremely challenging and unpredictable. Svitolina’s quarterfinal opponent is Nadia Podoroska, currently ranked #131. Podoroska, from Argentina and just twenty-three years of age, is most definitely match tough as she came through qualies. This will be their first tour-level meeting with a coveted grand slam semifinal spot up for grabs.