Andy Murray, the two-time Wimbledon champion (2013 & 2016) continues to impress and inspire. The 34-year-old Brit is playing at the All England Club for the first time in four years following multiple hip surgeries, the most recent in January of 2019.

Denis Shapovalov, just twenty-two years of age, is currently ranked #12, having broken into the top ten last fall. The lefty from Canada with one career title reached the final in Geneva this spring (l. to Ruud) and posted good results on grass, reaching the quarters in Stuttgart (l.to Cilic) and the semis at Queens (l. to Norrie).

In their first career meeting, Shapovalov had to battle not only the former world #1 on centre court but the British crowd. Shapovalov won the toss and elected to receive.

Murray held to 30 for 1-0 with a terrific crosscourt forehand and huge serve on consecutive points. Shapovalov had a more arduous time holding as he misfired on serve and faced two deuce points but held as Murray, slipping on the grass, overcooked a backhand.

Murray whiffed a couple of forehands, faced break point, and dumped serve when following an outstanding rally, Shapovalov ripped the backhand crosscourt. The #10 seed consolidated the break for 3-1, holding at love.

Despite opening with an ace, Murray missed 6/12 first serves and it cost him. Following two unforced errors off the forehand and a poorly executed drop shot, Shapovalov earned a break point. Murray would save two in total but dropped serve on the third when he butchered a backhand. 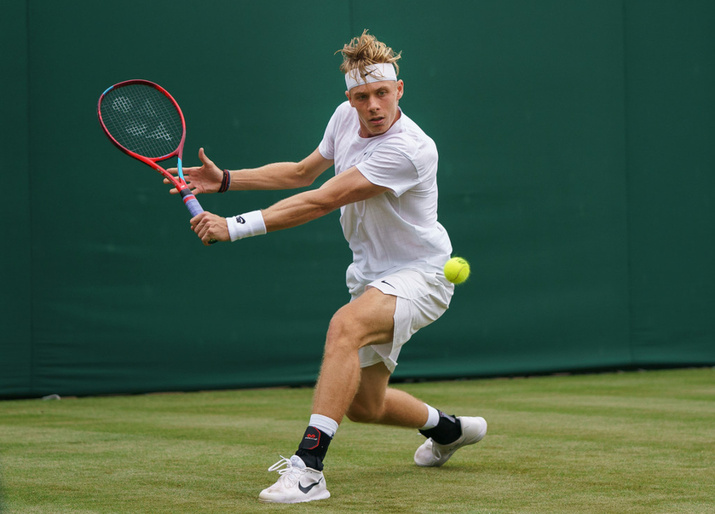 Shapovalov, serving at 4-1, made 2/6 first serves yet held to 30 for 5-1 with an extraordinary forehand down the line on game point. Murray down 1-5, battled admirably, unleashing an incredible crosscourt forehand to reach 30-30, and held when his opponent mishit a forehand.

Shapovalov served for the set at 5-2 but could not close. He missed 3/4 first serves to go down triple break point and dumped serve when he netted a forehand off a spectacular return.

The crowd at half capacity, roared like 15,000  as they buoyed their charge to a love hold for 4-5. Shapovavlov served once again for the set and it was even more challenging than the first. Although he struck another ace up the tee, he soon faced break point when he mishit a backhand.

Murray stepped on the gas, earning two additional break points behind formidable groundstrokes but was unable to convert as Shapovalov secured the set with a marvelous drop shot winner.

Shapovalov threw in another ace and held to 30 for 4-0 when Murray netted a makeable backhand. Murray continued to miss on serve, making just 2/6 but held to 30 for 1-4 with a sweet crosscourt backhand volley.

Shapovalov felt the full weight of the crowd and Murray’s grit as the Brit crushed a backhand down the line for 15-30. The Canadian faced double break point when he netted a forehand and following two double faults and an exquisite lob from Murray, faced three more yet miraculously held behind two monster forehands and serve on the last three points.

Murray, serving with new balls, went big and it paid off as he held easily to 15 for 2-5. Shapovalov served for the set and quickly secured it as Murray continued to butcher the return.

Murray served first in the third and faced triple break point as he continued to flounder behind the baseline and dropped serve when an inside-out forehand went wide. Shapovalov hit three aces and a remarkable inside-out forehand on game point to consolidate the break.

Murray appeared weary, no doubt a consequence of the time spent on court in the previous two rounds, and not surprisingly, dropped serve following three more errors off the ground.

Shapovalov opened the 4th game with an ace and hit another en route to an easy hold for a commanding 4-0 lead. The crowd, urging on the hometown favorite, erupted in applause when he held for the first time despite donating a double fault and facing double break point.

Shapovalov maintained his focus and drive as he held to love for 5-1 with his 11th ace on game point. Murray continued to battle and while he missed 3/6 first serves, held to 30 for 2-5 with an astounding backhand down the line on game point.

The #12 player in the world struck two more aces on the last two points to put an asterisk on a stupendous performance. He demonstrated prowess from all sections of the court as he reached the 4th round at the Championships for the first time in his budding career.

While his opponent played a thoughtful, high-quality match, Murray’s serve betrayed him as did his trademark return. He was unable to sustain an offensive position from the baseline as Shapovalov continually unloaded off both wings.

Shapovalov finished with 13 aces to 3 double faults and won 71% on first and 57% on second serve points. He was equally effective at net winning 16/21 points and converting 6/11 break points. He finished with 45 winners to just 24 unforced errors and won almost 50% of the points when returning serve.

He will need to compete at this level or higher when he faces for the first time, the steadfast Spaniard, Roberto Bautista Agut. After going the distance in the first two rounds, the thirty-three-year-old veteran and #8 seed won his third match in straights.

Bautista Agut has excelled at each slam including a semifinal appearance at the Championships in 2019 where he lost in four to eventual champion, Novak Djokovic. To say the young upstart will have his hands full is a massive understatement. With a coveted spot in the quarterfinals at stake, this should be a highly competitive and entertaining match.