It was 7/11 for a spot in the quarters at the French Open. Andrey Rublev of Russia is ranked and seeded 7th at the season’s second slam. Two years ago, he lost in the quarters to Stefanos Tsitsipas and last year in the first round in five sets to Jann-Lennard Struff.

Sinner, with five career titles, is still seeking his first of the season while Rublev won three including the Serbia Open where he defeated world #1 Novak Djokovic in the final.

This was their fourth tour-level meeting and third on clay. Sinner took both on the dirt including a three-set victory in the 4th round at the 2022 Monte Carlo Rolex Masters while Rublev claimed the sole hardcourt match two years prior in Vienna. Rublev won the toss and elected to receive.

Sinner raced to a 40-0 lead but gifted a double fault before holding to 15 with his first ace. Rublev struck an ace out wide, but it was to no avail as he dumped serve following a plethora of second serves and a netted backhand.

Sinner hit two additional aces and held to 15 to consolidate the break for 3-0 and Rublev finally got on the board with three outstanding forehand winners. Sinner missed 3/6 first serves but with his fourth ace, held to 30 for 4-1. Rublev hit another spectacular inside-out forehand, but it did not help his cause as he dropped serve for the second time following two forehand errors on consecutive points.

Sinner served for the set at 5-1 but it got complicated as he faced two deuce and two break points. The world #12 eventually secured the set with an assist from his opponent; a netted forehand and a mishit return.

Rublev opened the second set with new balls and held easily to 15 with a huge serve up the tee. Sinner returned the favor, holding to 15 to level with a brilliant backhand down the line.

Following the sit-down, the Italian took a medical time out. He started the match with his left leg wrapped just below the knee and during the changeover took medication and received a massage.

He hit two fantastic forehand winners on consecutive points but faced two deuce points and though he double-faulted, threw in his sixth ace to level at three apiece. Rublev maintained his composure and aggressive court position as he held to 15 for 4-3 while Sinner continued to misfire on serve yet managed to level at 4-4. Rublev, on cruise control, made 4/5 first serves and with an overhead smash and inside-out forehand, led 5-4. Sinner, serving to stay in the set and with new balls, failed to level and dropped serve and the set when he netted a forehand. 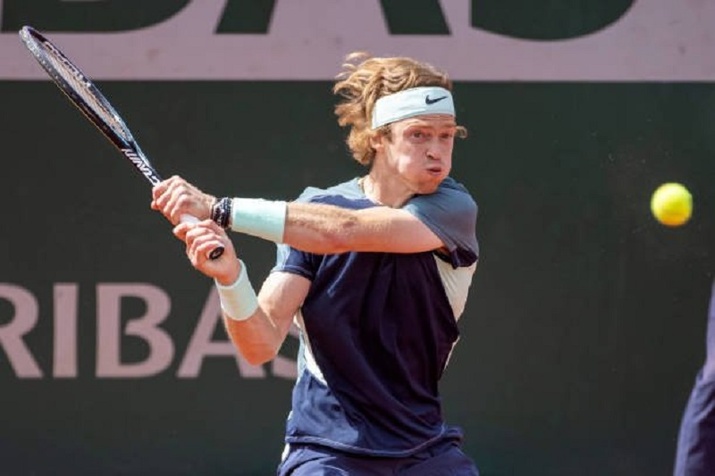 Rublev, serving first in the third, opened and closed with aces for his first love hold of the match. Sinner missed 4/5 first serves, donated a double fault and dumped serve when he netted another forehand off a deep return and immediately thereafter, retired from the match.

It was an unfortunate ending to what had promised to be a scintillating fourth-round match. The world #7 finished with 4 aces, 0 double faults, and won 83% of first but only 42% of second serve points. He struck 25 winners to 18 unforced errors and converted 2/5 break points.

Andrey Rublev moves on to the quarters where he awaits the winner of the Daniil Medvedev/Marin Cilic match. Medvedev, the world #2 and reigning US Open champion leads Cilic - a former world #3 and 2014 US Open champion - 3-0 in the head-to-head but they have never played on clay. Either way, this quarterfinal should be a slugfest with a semifinal berth on the line.