Rublev defeats Monfils 7-6, 7-6 to reach quarters at the W&S Open

Andrey Rublev, just twenty-three years of age, has achieved a career-high ranking of #7 and is seeking his first Masters 1000 crown having lost a final earlier this season on the dirt in Monte Carlo.

The Russian native has amassed quite the resume with eight career titles in addition to capturing the 2021 ATP Cup with teammates Daniil Medvedev, Aslan Karatsev and Evgeny Donsky.,

Gael Monfils, the charismatic and athletic elder statesman from France, achieved a career milestone when he defeated Alex de Minaur in the previous round; he became the 11th active player to win 500 matches. The 34-year-old from Paris with ten titles, achieved a career-high ranking of #6 in 2016. He has struggled since the tour resumed last summer following a five-month shut down due to the global pandemic and as a result, his ranking has dropped to #22.

They played just once prior to this 4th round encounter in the final in Doha in 2018 where Monfils schooled a then 19-year-old Rublev 6-2, 6-3. Monfils won the toss and elected to receive. 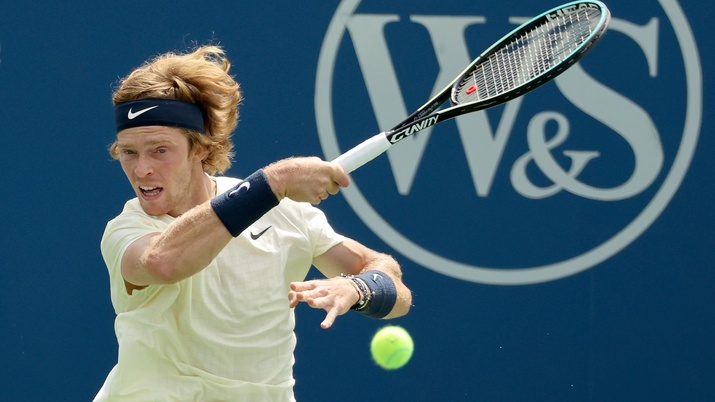 He set the tone from the start as he pummeled a second serve with an inside-in backhand return winner. Rublev reached game point with three outstanding, consecutive inside-out forehands and held when his opponent overcooked a forehand.

Monfils held to 15 for 1-1 with a double fault and an ace up the tee on the last two points. Rublev upped the ante, holding to love for 2-1 with an ace out wide on game point. Despite donating another double fault, the always entertaining Frenchman held to 30 for 2-2 with a 111mph forehand down the line on game point.

The Russian gifted his first double fault yet held to 15 for 3-2. Monfils continued to rip the forehand crosscourt and down the line as he held to love for 3-3. The world #7 made 4/5 first serves and held easily to 15 for 4-3. Monfils committed two consecutive forehand errors and faced a deuce point but managed to hold with a monster serve up the tee.

Rublev continued to cruise on serve, striking his second ace on game point for 5-4. Monfils, serving to stay in the set, hit three consecutive winners, two off the ground to level at 5-5. Rublev faced a bit of pressure as he overcooked a crosscourt backhand but held admirably with a spectacular forehand down the line and well-struck serves.

Monfils, serving to force the tiebreaker, opened with a double fault but held to 15 for 6-6 when Rublev mishit a forehand. It was a one-sided affair as Monfils committed four unforced errors including another double fault to concede the breaker 2-7.

Monfils served first in the second and opened and closed with an ace. What had been a relatively composed and congenial match soon took a turn as Monfils took his chair instead of changing ends after the opening game of the second set. Rublev appeared dumbfounded as Monfils sat down and conversed with the chair instead of changing ends. Monfils asked the chair if he could take a medical timeout before his next service game. The chair reminded him that if he felt unwell, he could request a medical time out. Monfils told the chair that he did not want to do that as Rublev was about to serve.

Clearly unsettled by the strange turns of events, Rublev missed 3/5 first serves and faced double break point-the first of the match for either player-and dumped serve when Monfils ripped a forehand down the line.

Monfils leading 2-0, met with the trainers on court. It was impossible to discern what they did or gave him, but he never left the court or had a body part wrapped. After the three-minute medical time out, the players took the court and began to argue!

Rublev was incensed and it appeared that he had accused Monfils of gamesmanship asserting he’s been pulling these tricks for the past seven years! After a primarily inaudible exchange, they approached the net, fist pumped and resumed play.

Monfils opened with an ace and despite striking another, faced break point and dropped serve when his backhand down the line went wide. Rublev, serving with new balls, could not consolidate and dumped serve when he butchered a crosscourt backhand.

Rublev, determined to win the match in straights, buckled down and held at love to level at 3-3. Monfils faced a break point when he mishit a crosscourt backhand but saved it and earned a game point with two consecutive aces and secured the game with an extraordinary crosscourt forehand.

Rublev continued to misfire on serve including a double fault and it cost him as he dropped serve to go down 3-5. Monfils gave back the break following two consecutive unforced errors and an incredible crosscourt forehand winner from Rublev.

The #4 seed faced the most challenging game of the match as he fought for parity. Following three deuce and one break point, he let out a scream before hitting an ace out wide to clinch the game.

Monfils, despite not breaking in the previous game, held at love for 6-5 with two consecutive aces. Rublev, serving to stay in the set and force the breaker, returned the favor, hitting two aces, the last on game point.

Seven points will decide if the match ends or goes the distance. In a tightly contested tiebreaker, the players changed ends with three apiece. Rublev was all business as he struck an ace up the tee and a fantastic inside-in forehand to lead 5-3. Monfils leveled at 5-5 with a well-struck serve and return. Rublev reached match point when he crushed a brilliant backhand down the line during the most riveting point of the match though it concluded unfortunately, with a double fault from Monfils.

This was a high-quality, drama-filled match which may well be duplicated or surpassed in the next round when Rublev takes on another talented and unpredictable Frenchman, Benoit Paire.