Raducanu Wins, Sets Up All-Teen Women's Final At US Open

Maria Sakkari, currently at a career-high ranking of #18, has enjoyed her most prodigious season on the WTA tour, reaching her second grand slam semifinal, the first at Roland Garros, where she lost 9-7 in the third to eventual champion, Barbora Krejcikova.

Her semifinal opponent first made headlines at the All England Club this past June when she reached the 4th round. Emma Raducanu, just 18 years of age, received a wildcard into the main draw and tore thru it, defeating the 2019 French Open finalist, Marketa Vondrousova and Sorana Cristea, currently ranked #37.

At the BJK National Tennis Center, she qualified for the main draw where in the last three rounds, she defeated world #43, Shelby Rogers, world #41, Sara Sorribes Tormo, and Olympic gold medalist and world #11, Belinda Bencic, all in straight sets. 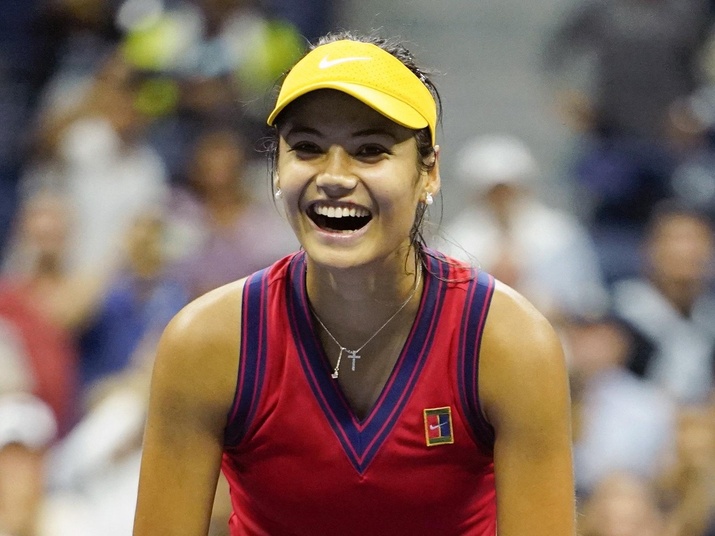 Raducanu served first and quickly faced three break points but with two aces and heavy-hitting off both wings, held for 1-0. Sakkari missed 5/5 first serves including a double fault and dumped serve when she netted a slice backhand.

Raducanu, serving at 2-0, faced triple break point yet held with well-struck serves and depth off the ground. Sakkari, down 0-3 and in disbelief, continued to overhit and after three deuce and two break points, dumped serve when she donated her second double fault of the game.

Raducanu consolidated the break holding easily to 15 for a commanding 4-0 lead. Sakkari, out of sorts and time, struck an ace, a forehand swing volley, and a blistering backhand crosscourt to hold for 1-5. Raducanu, striking the ball with conviction and clarity, closed out the set 6-1 before an astonished audience in Arthur Ashe stadium.

Sakkari served first in the second and held at love with an ace up the tee. Raducanu opened with a brilliant backhand down the line and closed with a wicked backhand slice for 1-1. Sakkari committed three unforced errors, the last off the forehand to drop serve for 1-2. The British teen gifted her second double fault but following a huge backhand down the line and another crosscourt, held with an ace up the tee for 3-1.

Sakkari, struggling with her serve and court position, soon faced double break point but managed to hold with her third ace and better shot selection. Raducanu struck two more winners off the backhand and held at love for 4-2, just two games from the biggest match of her young career.

Sakkari committed three consecutive unforced errors and faced four deuce and five break points yet managed to hold for 3-4 with well-placed serves and a backhand crosscourt volley. Raducanu remained calm and centered as she held comfortably to 30 for 5-3. Sakkari, serving to stay in the match, made 4/6 first serves and with two tremendous forehands, held to 30 for 4-5. Raducanu, serving with new balls, reached double match point after one hour and twenty-four minutes and with a forehand swing volley, earned a well-deserved spot in the final.

Emma Raducuna will face off against another teenager, Leylah Fernandez, for a US Open title. Raducuna was ranked #338 before the start of the Championships and entered the US Open ranked #150. She is the first player in the Open era, male or female, to come thru qualifying to reach a major final.

Raducanu played with poise, control, and intention. It was a stunning performance that stunned her opponent as well as the crowd. She was utterly dominant on serve winning a staggering 72% on first and 69% on second serve points and struck 4 aces to 2 double faults. Sakkari served poorly and Raducuna took full advantage winning 28/60 points when receiving.

Although 77 spots separate the two finalists in the rankings, this fortnight they both have competed at an exceedingly high level. While this one is too close to call, this much is certain-both young women have mesmerized fans in New York and around the world and will undoubtedly continue to do so for many years to come.