The non-hitting partner in doubles should help dictate play 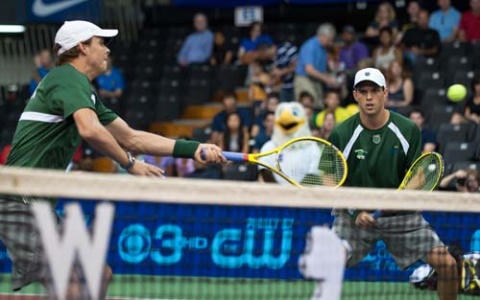 In doubles, it’s imperative to have a partner that’s good at the net. Tennis View recently asked Bob and Mike Bryan about the role of the non-hitting partner in doubles and how they can best influence the point. “If your partner is back and you are at the net, you should always be moving,” said Mike Bryan. “You may not pick off the ball, but at least the opponents will feel your presence. Standing still does absolutely nothing!”

As the Bryan brothers testify, a stationary net person who simply observes their partner rally defies the objective of doubles. The net person must put forth effort to influence the point, and one method is through poaching – or fake poaching.

An active net person, who is light on their feet and aggressively looking to poach, creates havoc on the receiver. Not only is the receiver concentrating on returning serve, but also focused on the movement at the net. An active net person creates their own poaching opportunity. When the returner hits a poor return because they were distracted by the net person, an easy poach volley likely follows.

An assertive net person naturally includes fake poaching in their tactics. A fake poach should be performed the moment before the receiver starts their swing. The net person jukes one direction, pretending to move to cut off a return, but instead stays their ground. This works especially well on wide serves where the receiver thinks the net person is leaving a huge gap in the alley. The receiver is tempted to hit into the perceived hole they think will be open. Not only is the alley a more difficult shot to execute, but it’s also an easy volley for the net person.

Poaching is a learned skill, where the net person mustn’t be discouraged when a poorly timed poach costs their team a point. Being aggressive is generally worth the risk in the long run. So, next time you’re playing doubles and are at the net, as the Bryan brothers suggested, keep your feet moving and create opportunities to influence the point. It’s a tactic that makes winning easier for your team and much harder for the opposition.

Power to the Poacher