The Akron WTA Finals is the season-ending championships where the top eight singles and doubles teams battle for year-end glory. Normally held in Shenzhen, China, it was relocated to Guadalajara, Mexico due to the ongoing covid-19 pandemic. The elite eight are divided into two groups of four where they compete in a round-robin format. The two players with the best records in each group advance to the semifinals.

This was the third time this season they had competed; Anett Kontaveit crushed Garbine Muguruza 6-1, 6-1 at the Kremlin Cup but lost to the Spaniard 4-6, 4-6 three days ago. Both reached the final with identical records (3-1) as well as the top ten after starting the season well outside it.

While Muguruza began 2021 on a tear, making three finals including the trophy in Dubai, she struggled to maintain that form throughout the spring and summer. By the end of September, however, she had found her footing, defeating Ons Jabeur at the inaugural Chicago Fall Classic for her second title of the season. 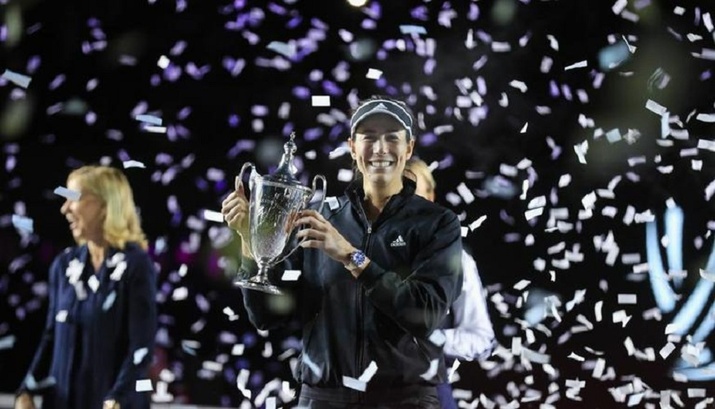 Kontaveit from Estonia was inconsistent at the start of the season but picked up considerable steam as the tour transitioned to grass. Though she lost to Jelena Ostapenko in the final at Eastbourne, she triumphed at the Cleveland Championships just prior to the start of the US Open.

Although she lost in the third round to then world #7 and 2020 French Open champion Iga Swiatek, she cleaned up during the indoor circuit winning three titles in 5 weeks! As a result of this remarkable run under the tutelage of Dmitry Tursunov, Kontaveit achieved a career-high ranking of #8 on November 1st.

This was the fourth time that Muguruza, now twenty-eight years of age, had qualified for the season-ending championships, having reached the semis just once before (2015) while the twenty-five-year-old Estonian was making her WTA Finals debut.

Kontaveit served first and probably wished she had not, missing 5/12 first serves including two double faults. She faced break point following an outstanding inside-in backhand from her opponent and two deuce points before holding.

Muguruza had a much easier time in her opening service game, holding to 15 for 1-1. The #8 seed once again struggled on serve, committing eight unforced errors including another double fault, and dumped serve when she netted a forehand.

Muguruza gave back the break as the unforced errors, especially off the forehand, began to accrue. Kontaveit consolidated the break for 3-2, holding at love with well-struck serves including an ace up the tee.

The #6 seed hit two fantastic crosscourt backhands and a huge serve up the tee on game point to level at three apiece. Kontaveit continued to misfire on serve and it cost her; she faced three break points and dropped serve when she netted a backhand.

Muguruza consolidated the break, holding to 15 with an ace down the middle for 5-3. Kontaveit, serving to stay in the set, opened with a double fault and following a mishit forehand, lost serve and the set when Muguruza’s backhand landed on the baseline!

Muguruza served first in the second and with a brilliant backhand down the line, held at love for 1-0. Kontaveit missed 3/6 first serves yet held to 30 for 1-1. The Estonian continued to rip the return and it helped earn two break points, but the Spaniard steadied the ship and held for 2-1.

Kontaveit faced a deuce point but held for parity while Muguruza once again held at love for 3-2. Kontaveit continued to struggle on serve and off the ground. She donated five unforced errors including her fifth double fault and faced four deuce and a break point before holding for 3-3.

Muguruza played an exceedingly poor game, gifting four unforced errors-three off the forehand-and dumped serve. Kontaveit seized the lifeline she had been given and with clutch serving including another ace, consolidated the break for 5-3. Muguruza, serving to stay in the set, held to 15 despite missing 4/5 first serves.

Kontaveit, serving for the set, opened with an ace but with another double fault and two backhand errors, dropped serve when her opponent crushed a forehand down the line. Level at 5-5, the former world #1 dug in and held to 30 for 6-5.

Kontaveit, serving to stay in the match, quickly faced triple match point as her opponent pummeled returns and lost serve and the match when she netted another backhand.

After 1 hour and 39 minutes, the two-time grand slam champion became the first Spaniard to win the WTA Finals and with the Billie Jean King trophy in hand, rose to #3 in the world.

Muguruza dominated on serve winning a staggering 69% on first and 62% on second serve points and when returning, claimed 40% of first and 59.5% of second serve return points. While she struck just two aces, she had zero double faults compared to six for her opponent.

It was an error-strewn final punctuated by intermittent brilliance and while the roads they traveled throughout the season varied considerably, both finished with multiple titles and top ten rankings.