Kerber defeats Sharapova 6-2, 6-3 to advance to the quarters at the Mallorca Open

Although they have split their last eight matches, Angelique Kerber, the reigning Wimbledon champion, won the last three, including their only previous match on grass in 2014 at the All England Club. This round of 16 grass court match at the Mallorca Open was their first meeting since the 2018 Australian Open.

Maria Sharapova, sidelined since January with a chronic shoulder injury, was looking to gauge her grass court game in preparation for the Wimbledon Championships. Sharapova, who won Wimbledon in 2004 at the age of seventeen, will have to go back to the drawing board as she was summarily outplayed by Kerber.

The serve has never been a strength or weapon for either player but for Sharapova, it’s an Achilles heel. She was broken in the opening game of the match as well as the seventh, throwing in three double faults along the way. She repeatedly caught the toss as she struggled for depth and placement. 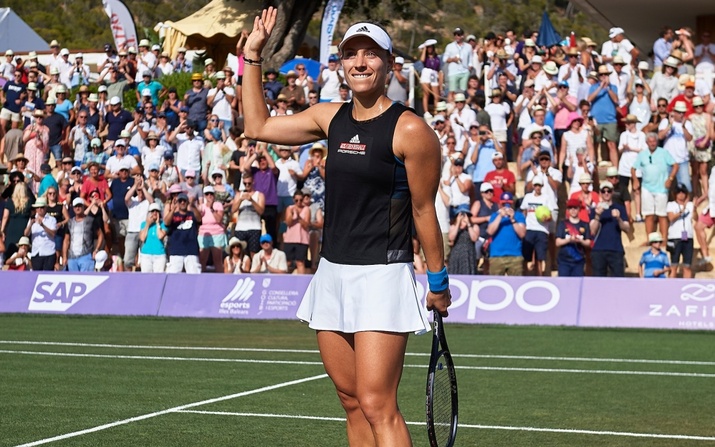 Kerber, who plays left-handed, faced a break point in the fourth game of the set but managed to hold with incredible ball striking off both sides. The thirty-one-year-old German is formidable off the ground, seamlessly transitioning from defense to offense and possesses a first-class drop shot which she used today to great effect.

Sharapova has found ample success pummeling the ball from the baseline but is extremely vulnerable when moving forward and her opponent brilliantly exposed and capitalized on this weakness. The thirty-two-year-old from Russia often appeared flat-footed and repeatedly lunged at balls, particularly on the backhand side rather than moving up to the ball.

Kerber, the #1 seed, up 5-2, served for the set with new balls and held to 15. It looked as if Sharapova might turn things around as she held to 15 to open the second set. She was unable, however, to make inroads on Kerber’s serve as she consistently missed returns wide, long and in the net.

Despite reaching deuce three times, Sharapova dropped serve to go down 1-2 when she failed to retrieve Kerber’s brilliant backhand slice. Kerber, a three-time grand slam champion, displayed the variety she’s known for, using the drop shot, lob and acute angles off the ground to consolidate the break for 3-1.

Serving down 2-4, Sharapova continued to struggle with her toss, throwing in two double faults and was finally broken when her backhand found the net. Kerber served for the match up 5-2 but immediately came under fire as her opponent dug in her heels, striking the ball with even more ferocity. Kerber, a bit too complacent, allowed Sharapova to dictate from the baseline, including a blistering cross-court backhand winner for the break.

Sharapova’s serve continued to betray her as she was broken to lose the set and match. Winning just 36% on second serve points is a recipe for disaster against a returner of Kerber’s caliber.

It was an exceptionally clean and dominating performance from the world #6. Angelique Kerber struck 18 winners to just 5 unforced errors and will face either world #132, Paula Badosa of Spain or the Nottingham Open champion, world #24, Caroline Garcia of France.