With two points on the line, world #3 Stefanos Tsitsipas battled the always dangerous and charismatic Aussie, Nick Kyrgios. Having played the Laver Cup before, these combatants knew what to expect and what was at stake.

Tsitsipas has enjoyed a remarkable season, winning his first Masters 1000 event on the dirt in Monte Carlo and backing it up with his first grand slam final at Roland Garros. While he has not performed as well on the hardcourts at the US Open, he twice reached the semis (2019, 2021) down under.

Although his opponent is currently ranked #95 due primarily to chronic injuries and lack of play due to Covid-19 travel restrictions, the twenty-six-year-old from Canberra with six career titles, achieved a career high ranking of #13 in 2016 and thrives in team competitions. The Athens native remembers all too well that the last time they played at the 2020 ATP Cup-another team competition-Kyrgios came out on top winning three tiebreak sets. 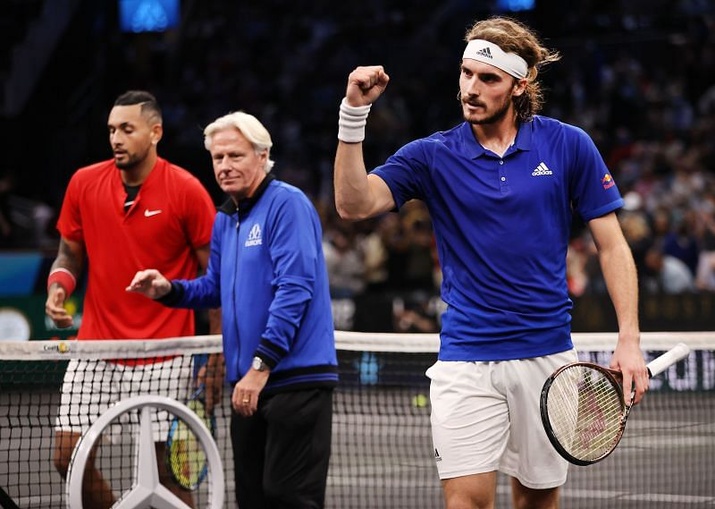 Tsitsipas served first and with a fantastic crosscourt forehand, held at love. Kyrgios opened with a brilliant backhand down the line and with a well-struck serve, held to 30 for 1-1. The world #3 ripped the ball off both wings as he once again held at love. The audacious Aussie opened the 4th with a 134mph serve and struck his second ace but poor shot selection cost him as he dumped serve.

Tsitsipas continued to serve well including one at 122mph on game point to consolidate the break for 4-1. Kyrgios, gleaning inspiration from a pro-Team World crowd, opened the 6th with a blistering backhand down the line and though he struck another ace, faced two deuce and two break points before holding with a spectacular inside-out forehand drop shot.

Tsitsipas opened with a 124mph ace up the tee and closed with another for a commanding 5-2 lead. Kyrgios, serving with new balls, refused to yield as he held at love for the first time, forcing his opponent to serve it out.

Tsitsipas weathered the barrage of applause for his opponent as he secured the opening point with a scintillating crosscourt forehand and secured the set at love when Kyrgios netted the return.
Kyrgios served first in the second and while he opened with two remarkable winners for 30-0, he faced break point yet managed to hold with a well-struck serve. Tsitsipas continued to serve with authority, holding to 15 for 1-1 with an extraordinary inside-out forehand on game point.

Kyrgios struck three consecutive winners including an outstanding slice backhand drop shot as he held easily to 15 for 2-1. The French Open finalist continued to strike the ball with conviction as he held to 30 for 2-2.

Despite hitting an overhead smash and a 127mph ace out wide, the Aussie native donated two consecutive double faults and dropped serve when his opponent crushed the return.
Tsitsipas opened the 6th with his first double fault but regrouped admirably to consolidate the break for 4-2 as he continued to exploit his opponent’s inability to hit forehands when pulled wide.

Kyrgios, emboldened by the boisterous crowd in TD Garden, held to 15 for 3-4 with an ace out wide and an unreturnable on the last two points. Tsitsipas, serving with new balls, had difficulty navigating the awkward terrain as the crowd maintained its thunderous applause for his opponent, urging him to go for broke and level the set.

The Athens native faced a triple break point following three unforced errors. Much to the crowd’s dismay, he saved all three but not after facing five deuce and two additional break points. It was a magnificent hold during which the world #3 pummeled two forehands-one inside-out the other down the line on the last two points.

Kyrgios, down 3-5, served to stay in the match and force his opponent to close. He opened with a well-placed serve and a forehand winner and closed with the same. Tsitsipas gave the crowd a reason to cheer after he dropped the first two points and faced break point but secured victory with two colossal serves and an outstanding forehand down the line on the last three points.

Tsitsipas played composed, strategic tennis with minimal risk. His opponent, with the home team advantage, was unable to consistently make him suffer. The world #3 was stellar on serve, winning 82% on first and 61% on second serve points. He was equally effective on the return, winning a staggering 30% of first and 53% of second serve points. While he converted just 2/6 break points earned, he saved the six that he faced. With this victory, Team Europe extends their lead to 5-1.