Kerber Rolls To The Third Round In New York

Angelique Kerber, former world #1 and 2016 US Open champion is approximating the level that earned her three grand slam titles. Last year she fell out of the top twenty, ending the year ranked #25.

She is currently ranked #17 having won one title on grass in Berlin at the end of June and reaching the semis at Wimbledon, losing to eventual champion, Ash Barty. At the Masters 1000 event in Cincinnati the week before the start of the Open, she once again lost in the semis to the eventual champion, Barty.

Her opponent, Anhelina Kalinina from the Ukraine, is currently at a career-high ranking of #75. Her best showing to date was three years ago when she reached the second round. She has won 14 titles on the ITF level and earlier this summer reached the final (l. to Putintseva) on clay at the WTA 250 event in Budapest. Kalinina had an abundance of confidence heading into this match having beaten Kerber in the first round at Roland Garros this past spring. 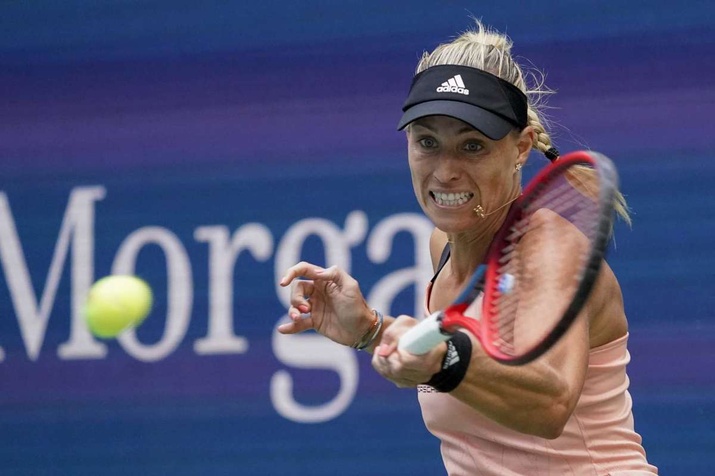 Kerber had cruised to a commanding 4-0 lead as her opponent failed to win a single point on serve. Kalinina struck three outstanding backhands on consecutive points to earn a break point and converted for 1-4 when Kerber double-faulted.

She was unable to consolidate the break as Kerber crushed the forehand on consecutive points and dumped serve when she netted a forehand. Kerber served for the set at 5-1 but dropped serve following three backhand unforced errors.

Kalinina struck her fastest serve of the match at 104mph and held to 15 for 3-5. The thirty-three-year-old from Bremen, Germany once again served for the set and this time made no mistakes as she closed it out at love with a colossal forehand down the line.

Kalinina served first in the second and dumped serve with her third double fault. Kerber donated three unforced errors and a double fault but consolidated the break when her opponent’s return went wide.

Kalinina opened the third game with a double fault and dropped serve when Kerber unloaded on the forehand return. Kerber consolidated the break holding at love for 4-0. Kalinina missed 4/8 first serves but held behind three well-struck winners off the ground.

Kerber, so lethal out of the corners and changing the direction of the ball, held easily to 15 for 5-1 with an ace up the tee on game point. Kalinina, serving to stay in the match, continued to miss with her first serve and gifted another double fault but managed to hold following two outstanding backhands on consecutive points.

Kerber served for the match with new balls and after a little over an hour, closed it out the way she started – pummeling the ball off both wings. Kerber finished with one ace to three double faults and won 71% on first and 48% on second serve points. She won 4/5 points at net, converted 5/6 break points, and hit 23 winners to 14 unforced errors. Next up for the three-time grand slam champion, is the 2017 US Open champion, Sloan Stephens.

Stephens leads the head-to-head 5-1 winning 4/5 on hardcourt. Kerber’s only victory came nine years ago, and they last played in 2018.