Compatriots and two of the hottest players on tour, met for the first time at the Foro Italico. Daniil Medvedev, world #2, continued his winning ways at the start of the season, reaching the Australian Open final (l. to Djokovic) and claimed his 10th title in March in Marseille.

also had an incredible run at the Australian Open, coming thru qualies to reach the semis (l. to Djokovic).

In January of 2020 he was ranked 293 and now, like his age, is twenty-seven. Proving that his run down under was no fluke, he won his first career title in Dubai, taking out Dan Evans, Jannik Sinner, and Andrey Rublev before defeating Lloyd Harris in the final.

He also has demonstrated his prowess on the dirt, defeating Novak Djokovic on home soil in Belgrade before succumbing in three in the final to an equally hot Matteo Berrettini.

Karatsev won the toss and elected to receive. This match, scheduled for May 11th was canceled due to rain. Twenty-four hours later, under sunny skies and a slight breeze, Medvedev opened with an exquisite inside-in forehand drop volley and held easily to 15 for 1-0. Karatsev unloaded on a backhand down the line as he held to 15 for 1-1.

Medvedev struck his first ace and with another huge serve and forehand down the line on game point, held to love for 2-1. The fourth game was more tightly contested as Karatsev faced deuce when he netted a backhand but managed to hold for 2-2 with a big serve up the tee. 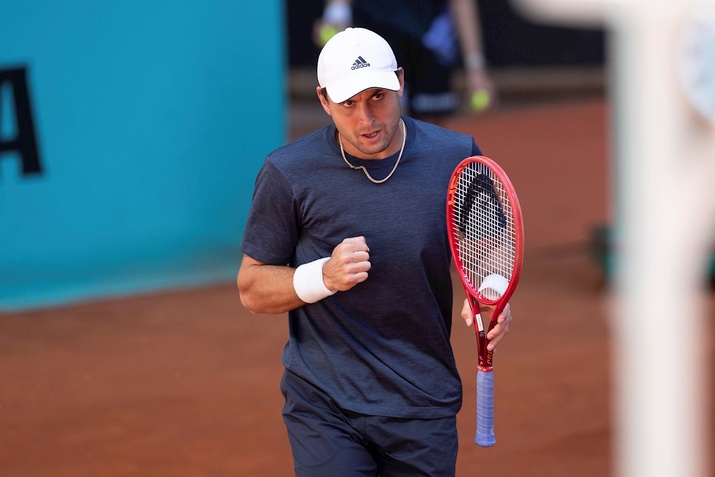 The world #2 opened the fifth game with a monster serve out wide but faced break point and dropped serve, getting passed down the line following a poorly executed drop shot. Karatsev was undeniably more aggressive from the baseline, dictating play with penetrating groundstrokes off both wings. The world #27 consolidated the break with a love hold, hitting a colossal serve up the tee on game point for 4-2.

Medvedev did most of the running as Karatsev had him on a string. The twenty-five-year-old faced three break points and dumped serve following five unforced errors – three off the backhand and two off the forehand.

Karatsev, serving for the set, opened with an ace and despite missing 4/8 first serves, closed it out when his opponent’s backhand return sailed long.

Medvedev, seemingly more focused and energized, upped the ante by holding at love with well-struck serves including one down the middle at 126 mph. Karatsev, not to be outdone by his countrymen, held at love making 4/4 first serves.

Although the scoreboard read 2-2, Medvedev somehow convinced himself he had no skin in this game. Though he was chirping incessantly to himself and his coach, he maintained his level of

Karatsev faced his first break point of the match as Medvedev began to go all-in on the return. Making just 2/8 first serves, he struggled to hold but did so following an overhead smash and a remarkable crosscourt backhand on consecutive points.

Level at 3-3, Medvedev continued to talk to himself and faced a break point when Karatsev crushed a crosscourt forehand pass. Throughout the match, he came to net on subpar approach shots, and it cost him. Medvedev repeatedly chose the wrong shots; in this instance, he should have lobbed in order to buy time and improve his court position. Karatsev took full advantage, securing the break with an outstanding crosscourt backhand volley winner.

Medvedev continued his conversation with himself during the changeover, talking himself right out of the match. Karatsev kept his foot on the gas, holding at love for a commanding 5-3 lead.

Medvedev, serving with new balls, appeared to have a momentary epiphany – he was still in the match and could level the set, but first, he had to hold. Despite serving three aces, he faced two deuce points but managed to hold for 4-5 when his opponent’s return went wide.

Karatsev, serving for the match, opened with a huge serve and forehand down the line and closed it out at love.

While the world #2 protests to dislike the dirt and is clearly playing that way, he would greatly benefit from remembering that in 2019 he beat Novak Djokovic in Monte Carlo on his way to the semis and followed it up with a final appearance in Barcelona.

Karatsev continues to excel with his eyes on the prize. Next up is American, Reilly Opelka and this will be their first tour-level meeting. The 23-year-old from Michigan took out 19-year-old NextGen superstar, Lorenzo Musetti in straights to reach the third round.