By Tracey DeFrancesco in First Serve

Judy Murray (@judmoo) is a fan favorite on Twitter. The mother of 2013 Wimbledon champ Andy Murray, Judy uses social media to show her followers what is going on in her personal and professional life. She tweets about things she likes, such as sweets and music. She posts photos from her travels around the world and her work with children and British tennis. But most notably, she makes witty remarks that let her personality shine – such as when she adds her own jokes to Yoko Ono's often incomprehensible tweets. 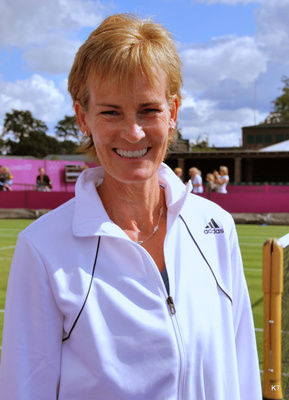 Tennis View Magazine: Fans love your personality and wit on Twitter. Do you have a philosophy about how much to share or what types of topics to post?

Judy Murray: I do a mixture of things. I retweet stuff about what Jamie and Andy are up to. I don’t tend to tweet about them as in me talking about them. I tweet things that I see when I’m at tournaments that are either interesting or amusing. It is a chance to show your personality a bit more.

TVM: What's your advice for players dealing with social media and negative interactions?

JM: You need to know why you’re using something. I know of many, many tennis players who receive abuse and threats over social media. Probably the key to it is not to read your mentions, just put out what you want to put out and follow who you want to follow. But if you go into your mentions where basically anybody can reply to you, then young players who don’t have as much life experience can get very upset by some of the comments that are posted there.

TVM: How do you respond to negative comments?

JM: If anybody sends me a comment that’s abusive in any way, I just immediately block them.

TVM: You’re not afraid to block someone?

JM: No, no, definitely not. I’ll block anybody who’s rude to me. But that actually doesn’t happen to me very often, and that would be something that I would give advice to the youngsters. If you’re going to read it, don’t take it seriously and block it immediately, or don’t read it, just don’t go into the mentions. Just follow who you want to follow and put out what you want to put out. Or don’t use it at all. If it’s in any way upsetting you, just stop using it.

TVM: That’s an interesting perspective given how much social media interfaces with the business side of tennis.

JM: Yes, social media is such a big part of players’ lives these days. Companies and sponsors are often looking at players’ followings on Facebook and Twitter to influence whether they could be a good ambassador for whatever it is they’re asking them to sponsor. So it’s important that they learn how to use it well. I think that’s where the WTA and ATP can advise, run workshops, teach them the pros and cons, and the upside and downside of social media.

TVM: What do you enjoy most about social media?

JM: I quite enjoy Twitter. I think it’s a great way to engage with fans because you’re in charge of what you put out. Many people say to me, ‘Oh gosh, you don’t smile,’ when they see me at tournaments on the TV. Of course when I’m watching the boys play, I’m very serious about what they’re doing, and it’s very stressful for me, so I never look like I’m enjoying myself. So I get people saying, ‘Oh you’re so serious on TV, you’re scary’ or whatever, and I think, I’m actually nothing like that! Twitter is just like a fun way to show that you’re pretty normal and that you have a good sense of humor, so I like it for that sort of side of it.