It was an outstanding performance against a worthy opponent. In just under 90 minutes, Matteo Berrettini defeated Roberto Bautista Agut and secured Team Italy’s place in the final. Although the Italian led the head-to-head 3-1 prior to this semifinal encounter, he knew he was in for a fierce battle.

Even with the 20-time grand slam champion Rafa Nadal out with a lower back injury, Spain reached the semifinals on the backs of two highly accomplished top twenty players. Spain, having lost to Serbia in the final last year, was looking to go the distance.

Berrettini, just twenty-four years of age and world #10, was teeming with confidence having beaten Dominic Theim and Gael Monfils during the round-robin competition. With a win this evening, he would clinch a spot in the final since Fabio Fognini already had beaten Pablo Carreno Busta. 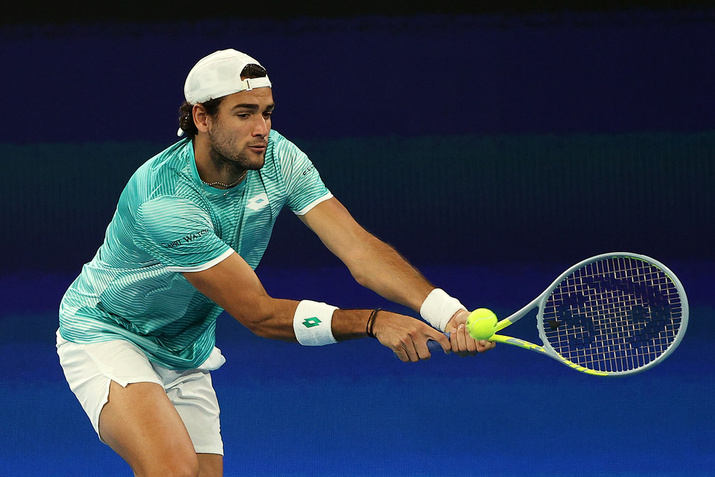 The Spaniard came under the gun as Berrettini employed the slice backhand to great effect in addition to his formidable forehand. He earned a break point when Agut’s backhand found the net and converted when he overcooked an inside-out forehand.

Berrettini consolidated the break for 4-1 with well-struck and well-placed forehands. It appeared as if Agut would drop serve for the double break but managed to hold to 30 when Berrettini’s backhand sailed long.

The Italian, serving with new balls, opened with an ace and closed out the game with a monstrous serve down the middle for a commanding 5-2 lead. Agut returned the favor, opening with an ace -  his first of the match – and held at love for 3-5, forcing his opponent to serve for the set.

Berrettini continued to serve with power and precision and though he missed 3/6 first serves, he secured the set when his opponent netted the return.

Agut, just two months shy of his 33rd birthday, took a three-minute medical time out for what appeared to be a groin injury. While it seemed to hamper his serve, it did not impact his ground game as he came out swinging, holding at love for 1-0.

Both struck the ball with authority, utilizing all areas of the court and the angles it affords. With a blistering backhand down the line pass and his 5th ace, Berrettini held to 15 for 1-1. Agut, finding the inside-out forehand more often than not, held to 30 for 2-1. The Italian struck two more aces and held to 15 for 2-2.

The Spaniard faced the gauntlet and double break point but held for 3-2 as he continued to unleash off the ground. Berrettini kept his foot on the gas, holding easily with two more aces and a forehand winner on game point.

Each player successfully employed the drop shot and was equally effective with the volley and in some of the most entertaining points, displayed both. Agut held to 30 for 4-3 and Berrettini leveled the set at 4-4 hitting two additional aces.

With scoreboard pressure, Berrettini would have to hold to stay in the set. His 11th ace of the match was not the highpoint of the game; a tweener to tweener point that was replayed numerous times undoubtedly will lead the highlight reel.

Berrettini hit a lob tweener that was returned as a tweener which he volleyed. Agut was able to reach the ball but missed the pass long. With another powerful serve, the Italian held at love for 5-5, just two games from the final.

Agut struggled to hold as he quickly faced double break point but managed to reach deuce twice before dropping serve after Berrettini ripped the forehand pass down the line.

Serving for a spot in the final, Berrettini struck his 12th ace and with two more colossal serves, closed out the set and match for Team Italy.

Berrettini’s performance was potent and poised and he will need more of the same when he takes on the reigning Nitto ATP Tour Finals champion and world #4, Daniil Medvedev of Team Russia.