Daniil Medvedev, the twenty-five-year-old from Russia has achieved a career-high ranking of #2 and reached the round of 16 at Wimbledon for the first time. The two-time grand slam finalist won his first grass court title last week in Mallorca, his second title of the season (Marseille). He showed tremendous resilience in the round, coming back from two sets down to defeat the 2017 Wimbledon finalist, Marin Cilic.

Hubert Hurkacz, the twenty-four-year-old from Poland is having the best season of his young career, winning two titles-Delay Beach and the Miami Open-a Masters 1000 event. The world #18 had not dropped a set or lost serve at the All England Club and like his opponent, reached the 4th round for the first time.

Hurkacz won the toss and elected to serve, holding easily to 15 despite missing 4/5 first serves. Medvedev opened with an ace and held to love for 1-1 with a crosscourt forehand winner.

Hurkacz continued to misfire on serve and it cost him as he faced five deuce and three break points and dumped serve for the first time during the fortnight when Medvedev struck an outstanding forehand down the line.

The Russian consolidated the break for 3-1 when his opponent’s backhand return sailed long. Hurkacz missed 3/5 first serves but held to 15 with a splendid backhand drop shot and backhand error from his opponent on consecutive points.

Medvedev continued to impress as he struck his second ace and three magnificent forehand winners on consecutive points to hold for 4-2. The 14th seed committed four unforced errors including a double fault to drop serve for the second time. 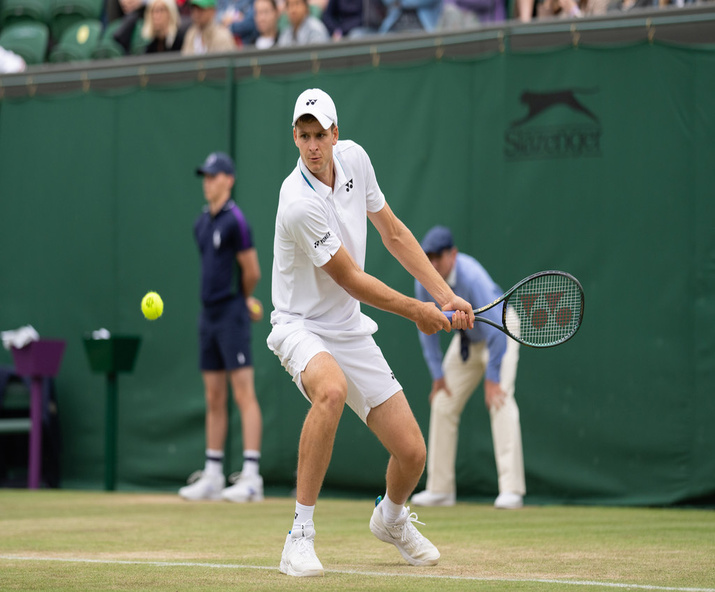 Medvedev closed out the set to love in 30 minutes when Hurkacz overcooked the return. It was an absolutely clinical performance from the world #2 as he dictated play from every section of the court.

Hurkacz served first in the second and while he double-faulted, held easily to 15 for 1-0. The 2021 Australian Open finalist continued to astound with exceptional movement and ball-striking as he held to 15 for 1-1 with his third ace.

Hurkacz began to find his rhythm on serve, holding to 30 for 2-1 with a huge one up the tee. Medvedev missed 4/6 first serves but held to 30 with an incredible backhand drop shot on game point.

Hurkacz maintained scoreboard pressure as he held to 15 for 3-2. Medvedev upped the ante, holding to love for 3-3. Hurkacz escaped jeopardy at 30-30 when Medvedev missed a makeable crosscourt forehand pass. Instead of facing break point, he reached game point and converted when Medvedev overcooked a backhand.

The #2 seed stepped up to the line and quickly closed to 15 to level at 4-4. Hurkacz, serving with new balls, faced 0-30 and two deuce points but managed to hold for 5-4 with a sweet backhand volley. Serving to stay in the set, Medvedev, opened with an ace, and though he donated his first

double fault, held to 15 for 5-5 when his opponent’s return went wide.

Hurkacz watched a blistering backhand down the line whizz by on the first point of the 11th game but held to 15 with an ace out wide, obliging his opponent to impose a tiebreaker. Medvedev did just that and in a flash, held again at love after his opponent whiffed the return.

Hurkacz served first in the breaker and amassed a 4-2 lead following multiple unforced errors from Medvedev. Hurkacz never looked back as he closed out the breaker 7-2 with a spectacular forehand return, overhead smash, and powerful serve on the last three points.

Medvedev served first in the third and reasserted his authority by holding at love for 1-0. Hurkacz opened with a double fault and following a poorly executed drop shot, faced break point and dropped serve when he overcooked a forehand.

Medvedev consolidated the break for 3-0 with a brilliant backhand down the line. Hurkacz opened with an ace and for the first time in the match, held at love for 1-3, as he served and volleyed on game point.

Medvedev returned the favor, holding at love for 4-1. Hurkacz was in danger of dropping serve when Medvedev earned a break point with a superb backhand down the line, but the Miami Open champion battled and held for 2-4.

Medvedev continued to play at a fast pace, holding at love for the sixth time to lead 5-2. Hurkacz managed to hold despite facing a break point and compelled his opponent to serve for the set.

Medvedev maintained his aggression off both wings and earned a break point with another extraordinary running forehand down the line. Hurkacz escaped trouble with two well-struck serves on the last two points. He opened the 9th game with a terrific inside-in forehand winner and clinched the set 6-3 with an astonishing crosscourt forehand pass.

Hurkacz served first in the fourth and despite two consecutive errors off the ground, held to 15 for 1-0 with a crisp backhand volley. Medvedev opened with an ace and though he threw in his second double fault, held to 15 for 1-1.

Hurkacz made 4/6 first serves and held to 30 for 2-1 when Medvedev netted a backhand. The Russian, clearly in the zone, held to 15 for 2-2 with penetrating groundstrokes and sharp volleys.

Hurkacz, serving with new balls, committed three unforced errors but held for 3-2 with a serve and volley on game point. Medvedev had an even harder time holding despite striking two aces. He committed multiple errors and faced break point when he netted a drop shot. The world #2 struck a mindboggling forehand down the line from the doubles alley, hooking it past Hurkacz and following five deuce points, crushed two backhands down the line on consecutive points to hold for 3-3.

Hurkacz opened with a fantastic forehand down the line and closed to 15 for 4-3 with his 6th ace after which play was suspended due to rain. The match resumed the following day on No. 1 Court with the roof closed. Medvedev was flat and a bit distracted as he dropped serve following multiple unforced errors. Hurkakz consolidated the break and secured the fourth set with an ace out wide.

Medvedev served first in the deciding set and although he reached 40-15, he faced a deuce point before holding for 1-0 when Hurkacz netted the return. Hurkacz continued moving forward including a serve and volley winner to hold at love for 1-1.

The world #2 failed to find his rhythm off the ground and donated a double fault to drop serve when the squash forehand sailed long. Clearly disgusted with his performance since the match resumed, Medvedev smacked his racquet on the court before Hurkacz stepped up to serve.

Hurkacz consolidated the break for 3-1 with an ace up the tee. Medvedev seemed to have regained his composure and focus, striking three consecutive aces to hold to 15 for 2-3. Hurkacz, determined to keep the wily Russian at bay, held to 15 for 4-2 when his opponent overcooked a backhand down the line.

Despite missing 5/10 first serves and committing two consecutive unforced errors off the backhand, Medvedev held for 3-4 after two deuce points with a crosscourt forehand winner.

Hurkacz, just two games from his first grand slam quarterfinal, continued to serve big including another ace out wide as he held to 15 for 5-3. Medvedev, serving to stay in the match, gifted multiple errors off the backhand wing and relinquished the game, set, and match when he netted a poorly timed and executed forehand volley.

For Daniil Medvedev, this was a disappointing finish after yesterday’s spectacular performance. Hubert Hurkacz raised his level and sustained his focus in earning a coveted spot in the final eight where the 8-time Wimbledon champion, Roger Federer awaits.