Elina Svitolina may have had the edge in their head to head but today on center court at the All England Club it was complete advantage Simona Halep. In 1 ¼ hours, in their first meeting on grass, the world #7 put on a brilliant display of controlled aggression and flawless defense.

Halep, the twenty-seven-year-old Romanian and 2018 French Open champion, viewed primarily as a counterpuncher, finished this semifinal match with an astounding twenty-six winners to sixteen unforced errors.

Although the first two games of the match were exceptionally long, each with five deuce points and three break points, it was Halep who converted first to take a 2-0 lead.

Svitolina, the twenty-four-year-old Ukrainian regrouped in the following game reaching triple break point and converted for 1-2 but would fail to win another game. Halep relinquished little ground as she dictated play with formidable groundstrokes off both wings. Svitolina, seemingly at the mercy of her opponent, was relentlessly yanked from corner to corner at times barely getting her racquet on the ball. 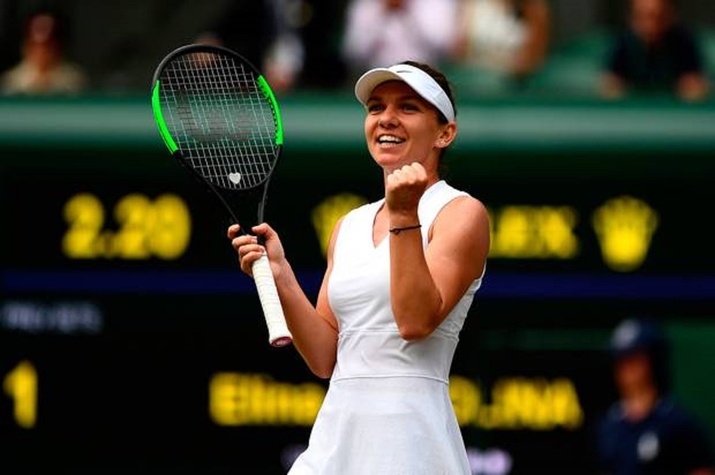 Halep playing with supreme confidence, continued to go for her shots down the line in addition to effectively employing the drop shot which drew repeated errors from her opponent.

Svitolina served first in the second and held to 15. In the next three games the server held to love but in the fifth game, Svitolina came under fire as Halep continued to dictate from inside the baseline. Svitolina dug deep and managed to hold when Halep missed wide with the forehand down the line.

Halep maintained her focus and ferocity winning most of the extended rallies by forcing her opponent to hit off her back foot and from awkward positions. On serve at 3-3, Svitolina missed two backhands on consecutive points and with a scintillating forehand down the line by Halep, faced double break point. Unable to handle the depth of shot from her opponent, Svitolina dropped serve when her forehand sailed wide.

Halep struck her first and only ace of the match on game point to take a commanding 5-3 lead. Svitolina, serving to stay in the match could not surmount the accuracy and pace of Halep’s groundstrokes and dropped serve to lose the set and match.

Halep would most likely prefer to play Barbora Strycova, the thirty-three-year-old from the Czech Republic. Halep leads the head to head 5-1 and this would be their first meeting on grass.