The Grass Is Always Greener In Newport

At seven years of age, I watched my first professional tennis match at the West Side Tennis Club in Forest Hills, NY. With a new school year looming, it was a final care-free adventure with my family.

I probably grasped the concept that the US Open was a very important tennis tournament for the men and women, but had no idea what a grand slam event was or how accumulating them would propel a player into the tennis stratosphere and the International Tennis Hall of Fame.

In 1995 at the age of thirty-two, I concluded I couldn’t wait another day, week, month or year to visit Newport, Rhode Island and the pristine grass courts of the Newport Casino – the site of the first US National Championships, presently known as the US Open. 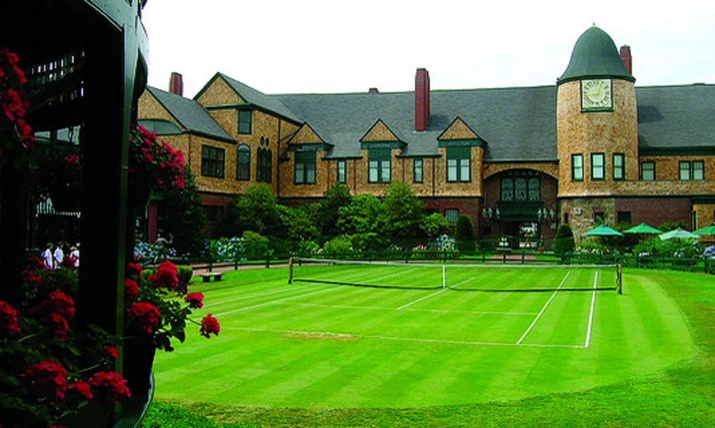 In early September, with an Amtrak ticket and an abundance of enthusiasm, I embarked on a four-hour journey that landed me in the lobby of the ornate and historic Hotel Viking. Since this was a spur of the moment adventure, I had not made a hotel reservation. I was confident, however, that I would easily secure a room since it was one of the larger hotels in Newport.

Unbeknownst to me, the Newport Jazz Festival was in full swing and there was not a hotel room to be found! I wandered the streets of Newport searching for a vacancy sign only to repeatedly be turned away as I ran out of options and hope as darkness loomed.

Desperate, uneasy, and praying for a miracle, I ventured back to the Hotel Viking to once again inquire if there was an available room. As expected, I was denied but inexplicably, the tennis gods intervened.

A women standing beside me at the front desk overheard my dilemma and informed me that the hotel had inadvertently booked her in two rooms and instructed the reservationist to assign me the extra room.

I was thankful, ecstatic, and exhausted. Although the room was $500 more than I could afford, I was in no position to complain. I was able to secure a different, significantly less expensive room for the following day and keep alive my Tennis Hall of Fame adventure.

As you walk onto the grounds of this Stanford White architectural gem, you are struck by its beauty, tranquility, and other worldliness. You are immediately transported to a place and time when tennis was played in slacks, long dresses, and with wooden racquets.

Remarkably, six years later, women were allowed to play but not in Newport, Rhode Island; their event was held at the Philadelphia Cricket Club until 1920 after which they competed at the West Side Tennis Club in Forest Hills, NY. The men, however, began competing in Queens, NY in 1915, with a short-lived relocation to the Germantown Cricket Club in Philadelphia only to return to Forest Hills in 1924.

After touring the well-manicured grounds and world class museum, I returned to Manhattan with a steely determination to make the HOF an integral part of my life. In 1996 I began volunteering at the Hall of Fame Open and have done so ever since. This would have been my 25th consecutive year helping to raise money for the HOF.

The Hall of Fame Open – an ATP 250 event – begins the day after the conclusion of the Wimbledon Championships. On semi-final day, following an emotional and memorable ceremony on center court, the new class is bestowed with the game’s highest honor – induction into the International Tennis Hall of Fame.

Regrettably, the tournament and induction ceremony were canceled due to the ongoing COVID-19 pandemic. I would have arrived in Newport, Rhode Island on July 12, 2020 while Goran Ivanisevic and Conchita Martinez would have been inducted on July 18th.

My annual pilgrimage and their induction will have to wait another year but thankfully, the magnificent clocktower, cobblestone paths, lush lawns and incomparable museum collections endure and are currently open to the public with certain restrictions.

Twenty-five years ago, I walked onto Bellevue Avenue and stepped back in time to the Gilded Age. I encourage everyone that loves the game of tennis and history to visit Newport, Rhode Island, and the International Tennis Hall of Fame. I am confident that once you enter the grounds of this national historic landmark, you too will be compelled to return.