Slinger Bag (https://slingerbag.com), a portable tennis ball launcher, just announced the addition of Patrick Mouratoglou as a brand ambassador. He joins the sports brand’s chief ambassador Tommy Haas, as well as doubles legends Bob and Mike Bryan and renowned coach Nick Bollettieri. Mouratoglou founded a tennis academy in Paris and has counted Serena Williams among his star pupils since 2012.

Mouratoglou’s Ultimate Tennis Showdown, an international tennis league, has also partnered with Slinger Bag to pursue a shared goal of attracting a larger, younger fanbase to the sport.

“Slinger Bag is unique, in that it is a product I would use with my current professional athletes but would also recommend to younger players just starting their careers,” Mouratoglou said. “Slinger Bag’s versatility, along with it being incredibly portable and very affordable, is key to why I believe the Slinger Bag will be a game changing product.”

Portability and pricing are indeed two huge competitive advantages for Slinger Bag, which burst onto the scene in the spring of 2020, just in the nick of time for tennis players looking for a way to hit the courts without a partner during the COVID-19 lockdown. 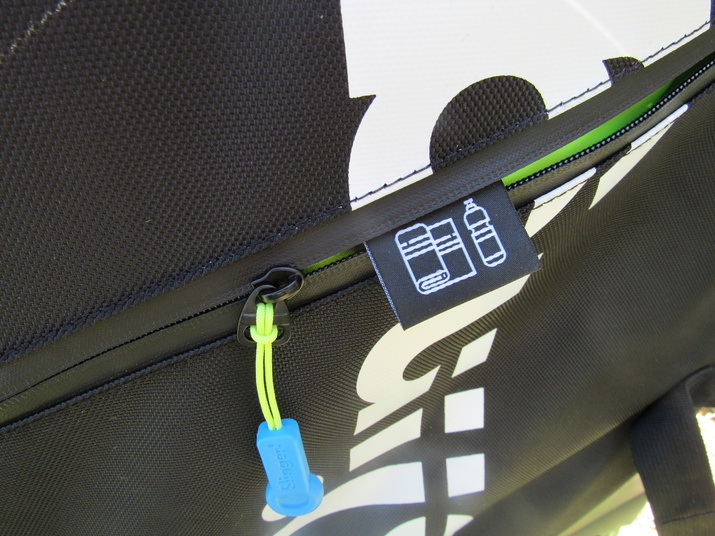 The Slinger Bag base model sells for $590, which is several hundred dollars less than the next-closest entry level model and about one-half to one-third the cost of other portable ball machines on the market.

The Slinger Bag Grand Slam Pack includes an oscillator to rotate the bag back and forth, varying where the balls are aimed, along with a telescopic ball tube for easy pick up and camera holder to hold your phone in place to take a video of yourself playing ($715).

This ball launcher looks more like a rolling suitcase than the typical ball machine. The ball hopper, which zips closed for transport, holds a maximum of 144 balls, although the recommended capacity is 72 balls. There’s a roomy compartment running vertically along the back of the bag to carry several tennis rackets, and more zippered pockets on the side to hold the remote control, your phone and wallet (with a cord to charge your phone while playing!), and a water bottle and towel.

Every pocket on the bag is adorned with icons suggesting what to put in them, one of many details that add to the cool factor of the Slinger Bag. Neon lining, branded zipper pulls, and a

retractable handle all add to the feeling that Slinger Bag is the latest “It bag.”

Slinger Bag runs only on battery, so no need to search for a court with an electrical outlet. The unit takes four to six hours to fully charge, and will last for up to five hours on the court. The battery will run for up to three hours at medium settings with the oscillator, and about an hour and a half for those who can keep up with the top speed and maximum ball feeds. It comes with a remote control to turn the ball feed and oscillator on or off.

One tradeoff for the portability of the Slinger Bag is fewer settings options than you get on the ball machines found at your local tennis club. But you can adjust the speed of the ball (10 MPH to 45 MPH), the feed rate (two to seven seconds between balls), and the angle of the feed (10 to 40 degrees of elevation), which are sufficient to customize the feed for players at all skill levels. 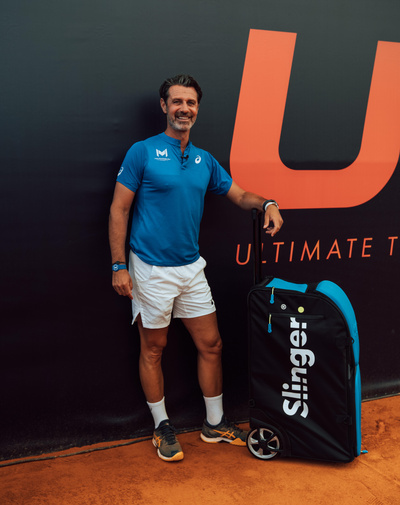 Putting It to the Test

Even at a great price and with all the hype behind this product, the main question is: Does it work?

Once my machine was charged up and ready to use, I wheeled it out to the courts with all the dexterity of a veteran flight attendant breezing through the airport. I found that the bag doesn’t quite fit into the trunk of my four-door Nissan sedan, but it slides easily into the backseat and the zippered compartment keeps the balls from tumbling out.

I spent about five minutes playing with the settings to get the speed, angle, and distance adjusted to my liking. I found that positioning the bag close to the service line gave me just the right ball placement for working on my forehand and backhand.

One defining characteristic of the Slinger Bag is its insane topspin. The ball leaps off the ground with a deliciously nasty kick, and for a moment, you can almost see the master of spin, Rafael Nadal, across the net from you. Lowering the speed or increasing the elevation takes off some of the heat, but I love the challenge of the topspin and can already see the improvements in my game from it.

The user reviews are overwhelmingly positive, although one frequent lament is balls getting caught in the hopper. The best solution appears to be adding some padding into the mesh siding of the hopper; in my experience using the bag with 72 balls, only five or six remained in the bag each cycle.

After a few hours on the court with a Slinger Bag, I had the answer to my question about whether it works (it sure does). I also had a new question, now that I have a built-in practice

Disclaimer: Slinger Bag provided a demo bag for review but the opinions in this piece are unsponsored and independent.