Garcia Moves Into The US Open Fourth Round

Garcia overpowers Andreescu 6-3, 6-2 to reach US Open 4th round for first time

Bianca Andreescu of Canada was just 19 years old when she defeated Serena Williams in the 2019 US Open final. Earlier that spring and summer, she claimed two additional titles, both Masters 1000 events. Following that outstanding breakout season, she attained a career-high ranking of #4 but due to the pandemic and nagging injuries, has plummeted to #48.

Her opponent is all too familiar with chronic injuries and plummeting rankings. Caroline Garcia of France was ranked #4 just four years ago but due to injuries and self-doubt, saw her ranking drop to #74. Fast forward to 2022 and the twenty-eight-year-old is ranked #17 and supremely confident having won three titles on three surfaces this season.

She defeated Andreescu on the grass in Bad Hamburg in a highly entertaining and competitive three-set match, won on the dirt at the Poland Open, and claimed her 10th and biggest title last month at the Cincinnati Masters. Having reached the third round for the fifth time this week, Garcia was determined to surpass that achievement.

This was their second tour-level meeting and first on hardcourt. Garcia won the toss and elected to serve. She missed 6/10 first serves and faced two deuce points but with a 114mph ace up the tee and winners on the last two points, held for 1-0. 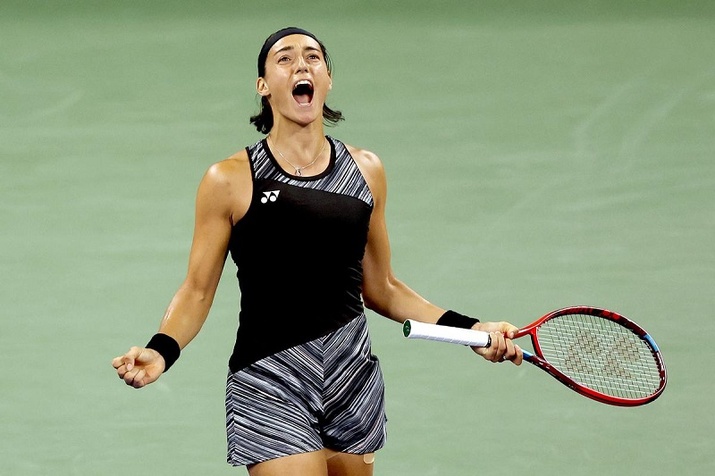 Andreescu also struggled in her opening service game as Garcia ripped an incredible inside-in backhand return winner and another on the forehand mid-rally to reach 30-30. She then earned a break point when Andreescu netted a forehand approach. The Canadian faced three deuce points but held with four consecutive first serves and a mishit return by Garcia.

Garcia held to 30 for 2-1 with an ace up the tee while Andreescu held to 15 to level with her first ace. The 17th seed opened the fifth with a poorly executed forehand but with her third ace and a crosscourt forehand winner, held easily to 15 for 3-2.

The 2019 US Open champion made 6/8 first serves but that was not enough to counter the easy power and fluidity of her opponent as she dumped serve following an outstanding backhand return down the line.

Although Garcia had dominated the majority of the baseline rallies with her aggressive court positioning, she gave back the break following three unforced errors. Andreescu, serving with new balls, dropped serve for the second time following two unforced errors and two winners from her opponent.

Garcia opened the 9th with a spectacular inside-out forehand and though she donated her first double fault, clinched the set 6-3 after Andreescu overcooked a backhand return.

Andreescu served first in the second and despite hitting her second ace, gifted her first double fault and dropped serve following another outstanding inside-out forehand from her opponent. Garcia once again gave back the break after a slew of unforced errors including her second double fault. Level at 1-1, the Canadian was on her heels more often than not and with another double fault, faced triple break point and dumped serve when Garcia unloaded on a backhand down the line.

Garcia struck her 6th ace and held to 30 for 3-1 with a fantastic inside-out forehand while Andreescu dropped serve for the third time as she was unable to neutralize the pace and depth of shot from Garcia.

The former world #4 had to work extremely hard to consolidate as she missed 6/12 first serves including a double fault and faced three deuce points but with two additional aces and a marvelous crosscourt forehand volley, held for 5-1.

Andreescu donated three unforced errors and faced double match point but with two extraordinary forehands and a netted return, held for 2-5. Garcia serving with new balls for a coveted spot in the round of 16, missed a makeable forehand but reasserted her dominance with a monster serve up the tee to secure the game, set, and match.

It was an astonishing display of controlled aggression and self-belief. Garcia has reached the fourth round at the US Open for the first time in her career. She finished with 8 aces, 3 double faults and won 69% of first and 45% of second serve points. She was particularly impressive on return winning 56% of first and second serve return points and converted 5/8 break points.

Next up, the American Alison, Riske-Amritraj. The Pittsburgh, PA native is a formidable competitor having reached a career-high ranking of 18 in 2019. The thirty-two-year-old with three career titles is currently ranked and seeded #29 and leads the head-to-head 3-0.

Two of the three were on grass including their last match this past June in Nottingham. Riske reached the 4th round in 2013, so like Garcia, is striving to reach the quarters for the first time. The stakes could not be higher.