Taylor Fritz the #1 American, entered the match against former world #6 Matteo Berrettini of Italy with a 2-0 lead in their head to head as well as a 2-0 lead in the mixed-team event final. The pressure was on Fritz for a win in Sydney, Australia would clinch the title and secure the United Cup.

Fritz just twenty-five years of age and ranked 9th in the world, earned four break points in the opening set, but failed to convert as they headed to a tiebreak. He opened with a massive serve up the tee while Berrettini donated a double fault. Team USA reached three set points at 6-3 and clinched the breaker 7-4 when the Italian netted a forehand.

Berrettini served first in the second and with two consecutive forehand winners and a forehand volley, held easily to 15 for 1-0 while Fritz faced two deuce points in his opening service game but with two aces up the tee leveled. 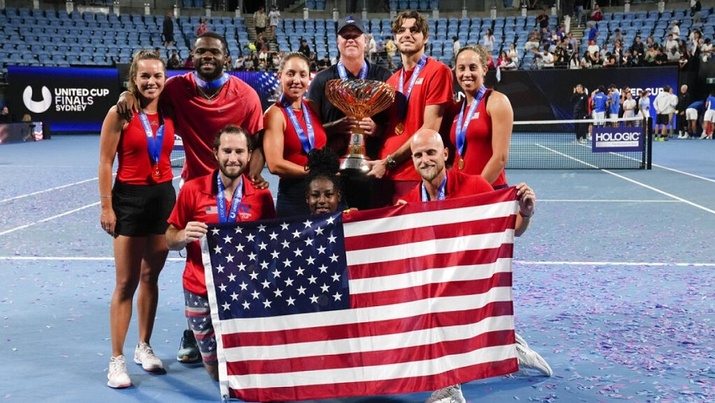 Berrettini the 2021 Wimbledon finalist faced deuce and two break points but held for 2-1 with a fantastic inside-out forehand. The crowd fully engaged from the onset, reveled in the combatants explosive power and athletic court coverage. Fritz with his 13th ace, held easily to 15 for 2-2 while Berrettini held to 30 for 3-2 with two aces out wide.

Fritz the 2022 Indian Wells champion, opened the 6th with an ace up the tee and with another and a blistering crosscourt backhand winner, leveled at 3-3.

Berrettini opened the 7th with a jaw-dropping forehand down the line but faced four deuce and three break points before eking out the hold with two additional aces. Fritz held easily to 15 for 4-4 while Berrettini missed ¾ first serves yet held to 15 with an ace up the tee.

The American continued to apply the pressure holding at love for 5-5 with a brilliant crosscourt backhand while the Italian with an ace out wide, assumed the lead at 6-5. Fritz serving to stay in the set and force the breaker, held easily to 15 as he continued to pummel the ball off both wings.

Berrettini with a monster serve out wide earned the opening point. Fritz leveled with a spectacular crosscourt backhand and with an exquisite lob leveled at 2-2. The American assumed the lead at 5-3 but with a stunning forehand pass, the Italian leveled at 5-5.

Fritz reached match point at 6-5 but a Berrettini forehand winner denied him. After changing ends Berrettini, unable to absorb his opponent’s power, mishit two forehands to relinquish the set and match. The Italian put forth a valiant effort saving all nine break points he faced. His ability to hold serve was quite impressive given the relative dearth of aces – just 7 to Fritz’s 15.

Fritz surrounded by his jubilant teammates, team and personal coach was elated and relieved to have come through in straights despite his inability to convert one break point. After 2 ¼ hours, Team USA prevailed to earn the inaugural United Cup. It was a fitting end to an exceedingly enthralling, high-quality, high-octane match. Both teams will head to Melbourne for the Australian Open full of pride and confidence knowing they laid all on the line for themselves, their teams and countries.