Serena Williams, at thirty-nine years of age, was striving to win her fourth French Open championship (2002, 2013, 2015) and tie Margaret Court with 24 total grand slam titles. With the 2019 champion, Ash Barty pulling out mid-match in the second round and the 2018 champion, Simona Halep withdrawing before the tournament commenced, Williams envisioned a more hospitable path to the finals.

Standing in her way was the young, yet accomplished player from Kazakhstan, Elena Rybakina whom she had never played. Just twenty-one years of age with two career titles, her best showing at a grand slam was the third round at the 2020 Australian Open.

Rybakina achieved a career-high ranking of #17 in February of last year and is currently ranked #23. Rybakina served first at held at love. Williams returned the favor, holding at love for 1-1. Rybakina once again held at love for 2-1 but Williams discontinued the pattern as she dropped serve for 1-3. 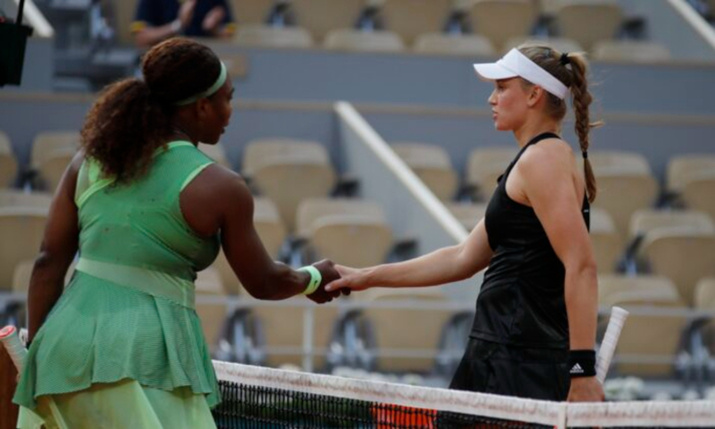 Rybakina held easily to 15 for 4-1 as did Williams for 2-4. The 21st seed faced her first break point when she double-faulted. Despite hitting an ace out wide, she faced two additional break points following an incredible inside-out forehand and inside-in backhand return from Williams. Rybakina feeling the weight of her opponent’s shots, overcooked a forehand to dump serve.

The former world #1 missed 3/5 first serves and gave back the break following a spectacular forehand down the line from her opponent. Rybakina, serving for the set, opened with a double fault. Although she missed 5/10 first serves including another double fault, and faced two deuce points, she battled and secured the set when Williams mishit the backhand pass.

Williams served first in the second and quickly faced triple break point and dropped serve following an outstanding backhand return from her opponent. Rybakina failed to consolidate the break as Williams upped the ante earning double break point following an extraordinary forehand swing volley, forehand down the line and an inside-in backhand return winner to convert.

Williams consolidated the break, holding at love for 2-1. Rybakina, sensing that the momentum had swung in her opponent’s favor, admirably regrouped, hitting an ace, a crosscourt forehand winner and a monster serve on consecutive points to hold for 2-2.

Despite committing two unforced errors off the ground, Williams held to 30 for 3-2 with an ace out wide. Rybakina did the same, holding to 30 for 3-3. The seventh or swing game never fails to disappoint as Williams faced triple break point and dumped serve for 3-4.

Rybakina so close to the finish line and a spot in the quarterfinals appeared to succumb to the weight of expectation as she committed four unforced errors to drop serve.

Level at 4-4, Williams continued to miss with the first serve yet managed to hold to 30 for 5-4. Rybakina, serving to stay in the set, continued to go big on serve including a huge one on game point for 5-5.

Williams watched a blistering forehand return whizz by to lose the first point and watched another crosscourt to lose the second. She faced triple break point following her first double fault and dropped serve when her opponent ripped the backhand return crosscourt.

After 1 ¼ hours, Elena Rybakina served for the match and her first grand slam quarterfinal. She exhibited remarkable composure in that pressure-filled moment, striking her 4th ace and held to 15 to close out the match. Her poise and easy power had repeatedly put her opponent on the defensive and herself in a winning position.

Next up, the 31st seed, Anastasia Pavlyuchenkova who defeated Victoria Azarenka in three sets. This will be their first tour-level meeting and with a coveted spot in a grand slam semifinal up for grabs, both should be well prepared to do battle on the terre battue.