Daniil Medvedev (23) has worked very hard this year to get into the top 10 in the world. The Moscow player has gone a little unnoticed but has been consistent with good results.This has allowed him to accumulate enough points to belong to the select group that makes up the top 10. He has fulfilled his personal goal that was set at the beginning of the year.

Medvedev started the year at Brisbane, where he reached the final but he couldn't get past Kei Nishikori. The Japanese player beat him in three sets. However, he added important victories against Andy Murray, Milos Raonic, and Jo-Wilfried Tsonga.

He continued with the Australian Open, being seeded for the first time in a Grand Slam, and reaching the round-of-16 where he was defeated by Novak Djokovic in four sets.  Novak would be champion of the tournament. 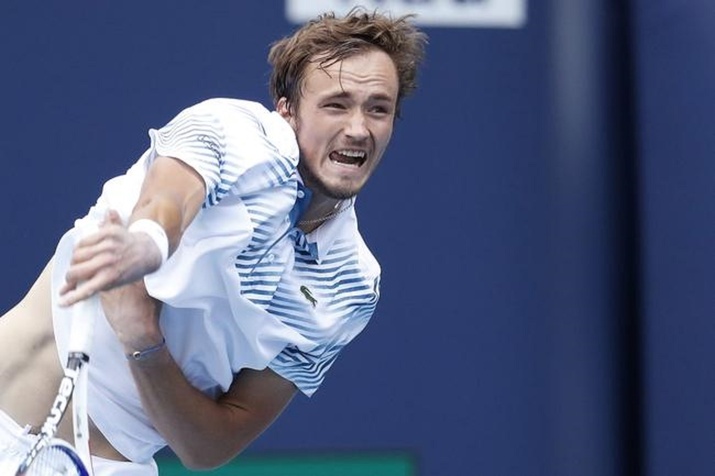 After the AO, he traveled to Bulgaria to play the Sofia Open, where he won his fourth ATP title by defeating Hungarian player Marton Fucsovics in straight sets.

In the following week, he confirmed his good run when he reached the semifinals at the ATP 500 in Rotterdam, where he lost to Gael Monfils in three close sets 6/4 3/6 4/6.

But Medvedev became the center of attention in the Monte Carlo tournament. He started the clay season with a record of 2 wins and 11 losses on this surface. It isn’t a surface where he feels comfortable. He advanced to the third round after winning two unquestionable victories, Joao Sousa 6/1 6/1 and Radu Albot 6/1 6/2.

Then came the first surprise, he defeated Stefanos Tsitsipas 6/2 1/6 6/4. But he had a bigger surprise saved, as in the next round he defeated Novak Djokovic 6/3 4/6 6/2, which gave him the pass to the semifinal. In the semifinal, he couldn’t handle Dusan Lajovic and lost 5/7 1/6.

After Monaco he continued like a rocket towards the final of Barcelona, leaving Kei Nishikori on the road and reaching a clay final for the first time. This time it was Dominic Thiem who stopped him in his attempt to take the title. Thiem won 6/4 6/0.

Although Medvedev didn’t find good results on the clay after Barcelona, he was able to attract attention and score points. In the French Open, he lost in the first round against Frenchman Pierre-Hugues Herbert in five close sets 6/4 6/4 3/6 2/6 5/7. This early departure allowed him more training time on grass, which is his favorite surface.

In the London tournament, at the Queen's Club, he managed to reach the semifinals where he lost unexpectedly to Gilles Simon in three sets 7/6 4/6 3/6. And in his favorite tournament, Wimbledon, he couldn’t pass the round of 32, where a brave David Goffin ended his dream 6/4 2/6 6/3 3/6 5/7.

Daniil Medvedev is ranked No. 10 at 23 years of age. He has sometimes been known for bad behavior on the court, the last one, in his match against Goffin in Wimbledon, where he refused to shake hands with the chair umpire and also hit the grass with his racket repeatedly. This action earned him a fine, which is not the first, two years ago he took out his wallet during the game and threw some coins at the chair umpire, which ended with another fine.

Despite these actions, Daniil Medvedev is a player in full development, has a great tennis IQ and will certainly provide entertaining matches. He is currently playing in the Washington ATP 500 tournament.