Many years ago, I decided to come up with a simple system to help players of all levels who struggle with good point construction. Not all of us have good natural instincts when it comes to playing points, and at the end of the day, I know that playing good points is a big part of a player becoming the best that they can be. It also helps students progress quickly. After all, we need to know how to use our tools to maximum effect. The Panel System is an easy way for players to better use the court and understand high percentage tennis. It is not a system that forces people to play robotic tennis. Rather, it is used as only a guideline to improve point play. When a student of mine improves their point play by using the panel system, I find that they usually start to make better decisions in general during point play and can get a little more creative with their patterns of play. My goal for them is to get to the stage where they do not need to use this system or rely on it. 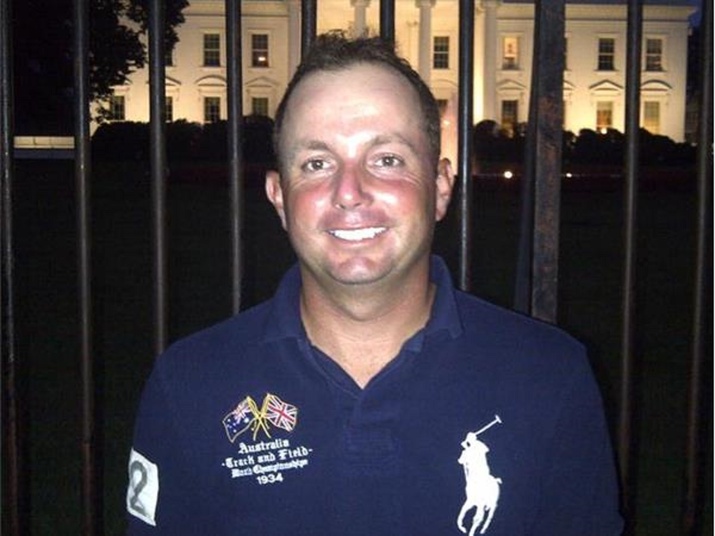 What is the panel system?

The Panel System is where the singles court is split up into three sections perpendicular to the net. The 3 sections are not equal. The first section is on a right-hander’s forehand side located 3 racquet lengths inside the singles sideline. It termed P1 for panel 1. The second third is the largest third and starts from the P1 line and goes all the way to 3 racquet lengths away from the other singles sideline. This panel is termed Panel 2. The third panel is the remaining space that is 3 racquet lengths between the sideline and panel 2. I use thick yellow lines to highlight these sections on the court.

Basically, if I am playing a point and the opponent hits my shot into panel 1 or 3, I play back crosscourt. This is because the opponent has either played a shot down the line, which means that my highest percentage reply is usually crosscourt, or they've hit a ball that goes crosscourt across my body, and therefore I play that shot crosscourt. If my opponent plays a shot into P2, the shot probably hasn't traveled across my body and therefore I change direction and go down the line. If the shot my opponent plays does go into P2 and does go across my body, I still play down the line. If a ball lands right on the border of a panel, the ball is played back crosscourt. The idea is to help people play high percentage tennis by better understanding their own side of the court. When players know what their shot options are with regards to shot selection from the baseline, they usually play higher percentage tennis.

The panel system is also very important for learning how to recover after a shot. I cannot tell you the number of times I see players of all levels recover too far along the baseline or not far enough. For example, if I receive a crosscourt backhand from my opponent that lands in P3, I hit my shot back deep crosscourt, and to determine my recovery position, I draw a straight line from where my shot bounces through the service T on my side all the way through my baseline. Where the line intersects on my baseline is the place I recover to. This formula is used for every shot I hit.

I use the panel system to determine a player’s recovery position after a return of serve. I find that this has really helped my students because many of them, for example, will hit a forehand return off a first serve from the deuce court down the line and then they will not recover far enough. Being in the correct position after a return of serve is absolutely crucial so that the opponent cannot take instant control of the point. 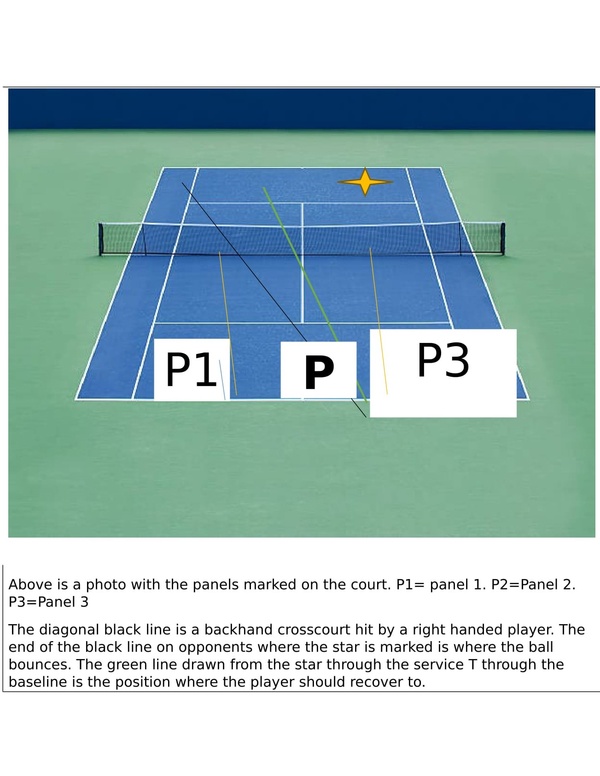 So many players in today’s game, especially at the higher levels, look to use their forehands to control points. As time goes on, I believe that players at all levels of the sport will become more dominant forehand because bigger forehands equal shorter points. The players that I coach who are dominant forehand, and who struggle to know which balls to hit as forehands, are the ones who benefit from the panel system. Generally, I like these players to look to use their forehands when an incoming ball from the opponent lands in P1 and P2. The same recovery principle that I established with the basic panel system applies. Too many times, I see dominant forehand players hitting backhands in P2. Forehand players must try to use their forehands as often as possible in P2 because this is a big upgrade from hitting a backhand because, as I stated earlier, and it is worth stating again, bigger forehands equal shorter points. Of course, there are exceptions to this. For example, if I am a dominant forehand player, and if a player rips a ball hard at me through the P2 area in the direction of my backhand, the pace of shot does not allow me the time I need to move around my backhand to hit a forehand, so I hit a backhand down the line.

I like my forehand dominant players to have the ability and mindset to use their backhand to set up their forehands, which is another reason as to why the panel works so well for forehand players. An example of the backhand setting up the forehand is when a dominant forehand player hits a down the line backhand from the P2 area, because the highest percentage shot the opponent can hit in reply to the down the line backhand is either crosscourt or through the middle, which should enable the dominant forehand player to then hit a forehand to take control of the point or reestablish control. My student, Ashley Kratzer, won the 18s Supernational Hardcourt Championships in 2017 and her reward for doing so was a wildcard into the US Open main draw women's singles. The Panel System helped Ashley tremendously. Ashley was able to use her forehand as a weapon, as she understood how to use her forehand from P2 and how to better use her weaker backhand to set up her forehand.

If you are a forehand dominant player, do the same as above but just follow the guidelines mentioned in the article for forehand dominant players. Make note of who is controlling the points. Ask yourself the questions “Am I hitting more forehands than usual? Am I getting short balls and more opportunity balls now that I am following the panel system?”

The Panel System is a great guideline for point construction. But as time goes on, I trust that this system will improve your point play to the extent where you no longer need it.

Tom Downs has coached on the WTA Tour and has worked with Rennae Stubbs, Elenda Dementieva, Vera Dushevina, Sam Stosur and Laura Granville. He has also worked with many highly-ranked ITF and USTA junior players. He was the Head Pro and Director of Coaching at the Harold Solomon Tennis Institute in Fort Lauderdale, Florida.