It always amazes me watching club level doubles. I see all sorts of things from seemingly never-ending crosscourt points between the two baseline players, players attempting to poach but hesitating so much so that they look afraid to make an error, players not using their strengths to maximum effect, players who do not follow the ball - the list could go on forever it seems. Watching strange events occur during doubles matches frustrates me. In this article, I will take you through some key elements of doubles that will help club players of all levels improve their doubles play. I understand and accept that professional doubles have changed over time with regards to various strategies due to the game being played on slower courts, which is a key reason as to why many players tend to play more from the baseline in general and look to work their way forward to end at net.  I am not saying that all club level players should play traditional doubles, rather I am trying to help club level players improve their doubles based on my learnings from modern doubles. However, there are several world class doubles teams that play traditional style doubles including the Bryan brothers. Let’s take a look at 3 key elements that will help you improve your club level doubles.

Understand your role as well as your partner’s role

It is important to know your role along with your partner’s role on the court. If one of you is better from the baseline and the other is better from the net, the baseline player needs to know how to set their partner up to be able to finish points at net. The idea of any game plan for doubles needs to be to find ways to isolate the weakest link and you need to be able to understand yours and your partner’s strengths and weaknesses when formulating the game plan. 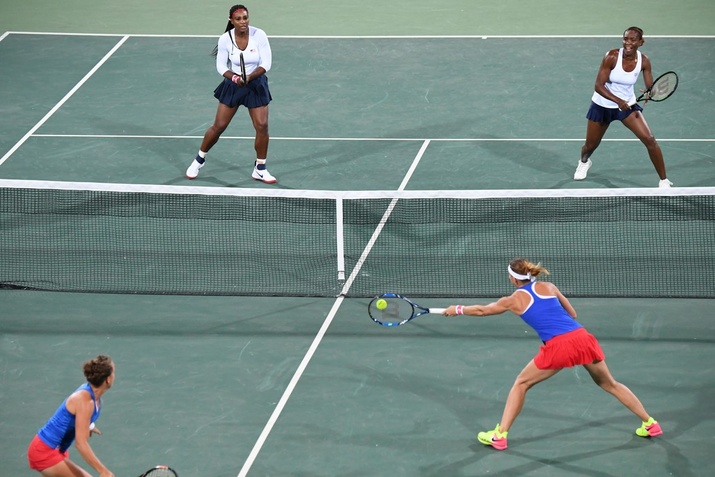 Often, I see great baseline club level players not maximizing their strengths on the doubles court. If you have great groundstrokes you need to use these weapons to set up your partner at the net. To do this, your goal could be to hit hard penetrating crosscourt groundstrokes to the opposing baseline players weaker side, with the aim to elicit a weak reply from him/her, which will set up your partner at the net to finish the point. If you are in a situation where your partner is great from the baseline, and you are also great from the baseline and both of you are average at net, to me it makes no sense to rush the net and look to control the net until the opportunity presents itself for you to do so. Until you get that opportunity, use your groundstrokes and continue to attack the other team in a controlled aggressive way. I am not a fan of two players playing back but if you and your partner are below average volleyers, then it can make sense. Often, with two players at the back, if your tactics are executed correctly, you will end up at net and be in a position to finish your points there. Remember, that whatever game style of doubles both you and your partner play, if you use your groundstrokes effectively, you should get easy volleys and you do not need perfect technique to knock off put-away balls at net.

My favorite doubles drill to work on understanding your role is the “all court” drill. Here, I start with one player at the baseline and one player at the net on both sides. I feed a ball from behind the baseline on one side to the baseline player on the other side. The baseline player then does whatever he wants, and the point is played out. You may think that this is a basic drill and you would be right. Please understand that the basic drills are often the best. The objective is to find ways to win points understanding your roles, and this is done by maximizing yours and your partner’s strengths. This drill is good for working on that.

Using the middle of the court

One of the best things I ever heard in doubles regarding the return of serve is to “return serve hard over the net strap.” Targeting the middle of the court takes away the angle from the opposition and can create opportunities for your team to move forward and take control of the point. It is also a great play to use the middle of the court when playing teams that play two back at the baseline for the same reason, as it takes away their angle. I always have my players use the middle a lot against teams that do not poach because a ball hit solid through the middle may bring some confusion for the other team as to who's shot it is, and if the opposing doubles team is not close to the net, it is a smart play to hit over the low part of the net at their feet. 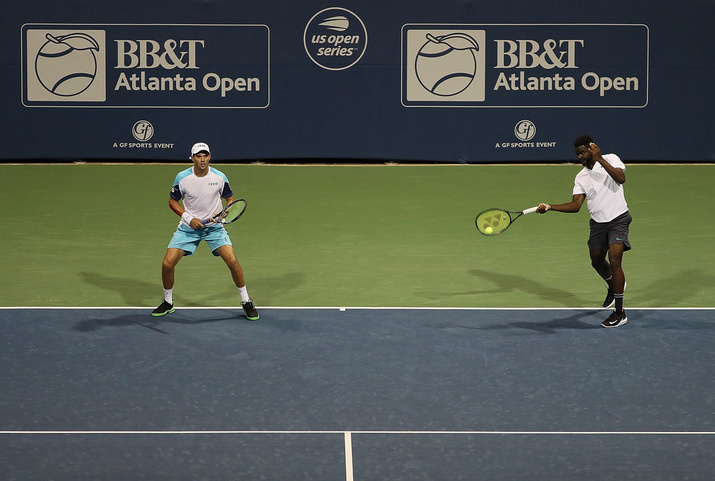 Taking these things into account, the net player on the team that I coach can be looking to poach and both players can be ready to pounce on a weak reply. I have always believed that using the middle creates opportunities to finish points with angles. I also encourage my teams to use the middle when the baseline player on my team is approaching and his/her partner is at the net and both opposition players are at net. The goal here is to set up the net player or the player approaching can also finish the point with an angle. As I always preach “up the middle solves the riddle.”

I have always been a big fan of two on two's. This is where one team is at the net and the other team is at the baseline. I feed a ball from behind the service T of the two volleyers. I mix my feeds to the baseline players - sometimes I feed middle and sometimes to either side. The baseline player must hit their first shot through the middle and then the point is played out. With the two players at net, one should be more attacking in closer net position and the other should be a little further back but in a position to close in or run down the lob.

Some may disagree but regardless of what style of doubles you play, whether it be relentlessly attacking doubles which may include serve, volleying and rushing the net, or two at the baseline where you wait for the other team to miss or work your way forward using controlled aggression tactics from the baseline, the goal is to take ownership of the points by looking to finish at net. There’s a lot more angle for players to work with when they are at net. I also believe in the psychological aggression factor, meaning that seeing a team attack or come in at the right time puts a lot of pressure on the opposing team and it's a fact that no one can be passed 100% of the time when at net. The hard thing can sometimes be to work out just how far to close into the net. To me, you do not need two players on top of the net. Rather, have you or your partner in an attacking position close to net ready to poach, and have the other person stand back a little, just inside the service line, so that they can close in more if needed or go back for the lob. Remember, both players need to follow the ball in doubles. Rennae Stubbs would often talk about an imaginary rope tied to you and your partner so that the two of you always follow the ball together. By doing this, you make the other team hit the more difficult shot to win the point. 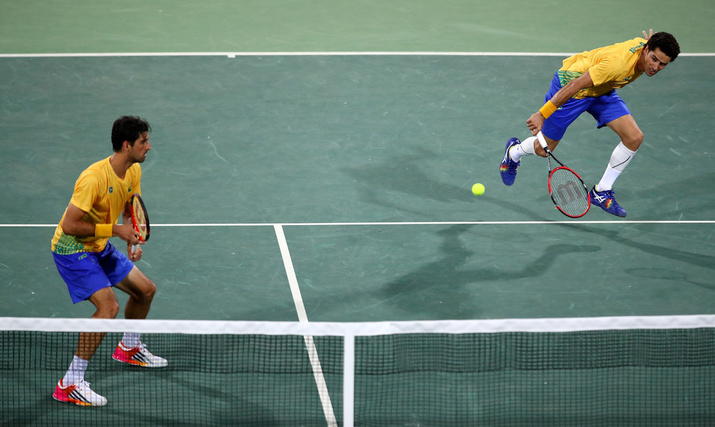 One of my favorite drills for getting teams to finish at the net is “murder”. This is where both teams start at their respective baselines. The game is played with three spots- baseline, service line and net. If a team wins a point they move forward one spot to the service line. If they win another point they move forward another spot to the net position. If they win two points at net, they get one point. At any time a team loses a point, that team moves back one spot. This is a fast-paced game that requires aggression to the net and controlled aggression tactics with the groundstrokes and volleys to win points in order to get to net.

Get to the net, and then have your opponents buy the first round (or three) of drinks at the bar. Maximize your strengths on the doubles court and this will happen a lot more often than not.

Good luck in your quest to improve your doubles game.

Tom Downs has coached on the WTA Tour and has worked with Rennae Stubbs, Elenda Dementieva, Vera Dushevina, Sam Stosur and Laura Granville. He has also worked with many highly-ranked ITF and USTA junior players. He was the Head Pro and Director of Coaching at the Harold Solomon Tennis Institute in Fort Lauderdale, Florida.