Serena Williams and Victoria Azarenka were seeking not only a spot in a grand slam final but redemption. Williams, having lost the last two years in the final at the US Open, is still looking to tie Margaret Court’s record of 24 grand slam titles while Azarenka is climbing back up the rankings since giving birth three years ago and navigating custody with her son’s father.

They played twenty-two times prior to this semifinal encounter with Serena dominating the head to head 18-4 including their two consecutive and fiercely contested battles- both won by Williams- in the 2012 and 2013 US Open final.

They split their last two matches (2019, 2016), both on hardcourts at Indian Wells. While Williams is seeded third, Azarenka is unseeded but playing with an abundance of confidence having just won the Western & Southern Open, played on the same courts at the BJK National Tennis Center.

The players encountered humid conditions as the roof on Arthur Ashe stadium was closed due to heavy rain. The match, having been played at an extraordinarily fast clip, seemed to change hands in an instant and before the umpire called the score, Azarenka had wrestled control of her opponent and the momentum. 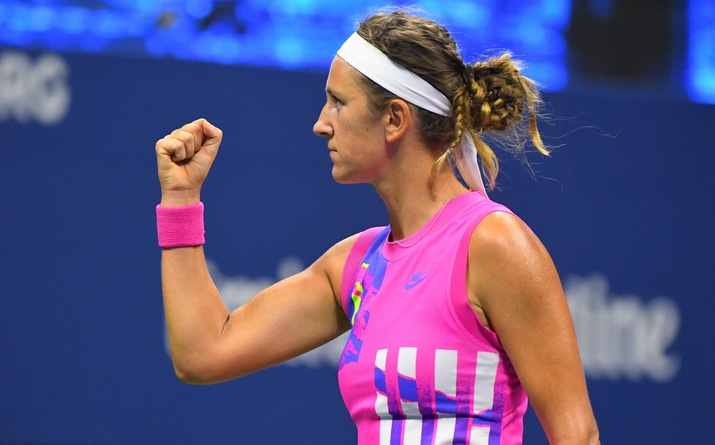 Williams, like her opponent, appeared a bit nervous, as she opened with a double fault but quickly found her rhythm, hitting three huge serves on consecutive points to consolidate the break.

Azarenka, still unsettled and rushing, once again found herself in trouble as she continued to miss with the first serve. Williams, with an outstanding inside-out forehand, earned break point and converted when Azarenka butchered a makeable backhand down the line.

The confident and aggressive Azarenka, playing inside the baseline with conviction was MIA. Throughout the last two weeks, the thirty-one-year-old Belarusian had been serving and returning exceptionally well but after just three games, it appeared as though Serena would once again dominate and close out the match in straight sets.

Williams, serving at 3-0, opened with a big serve and a fantastic forehand down the line. She held easily to 15 when her opponent’s crosscourt backhand went wide. Despite missing 4/6 first serves, Azarenka held to 30 for 1-4 when Williams netted the return.

Williams, serving up a double break, started making errors as her opponent began dictating off the ground. Azarenka executed a spectacular lob and earned a break point with two well-struck volleys. Serving big when she needed to, including a well-placed ace out wide, Williams held for 5-1.

Azarenka, often catching her toss before serving, became exceedingly frustrated and dejected as she let a 40-0 lead slip away. With two more double faults she lost serve and the set when Williams unloaded on the return and an acutely angled crosscourt forehand winner.

Williams opened the second set with her second ace and held to love hitting her third. The soon to be thirty-nine-year-old was also dictating off the ground, especially with the forehand. At this pace and with her opponent’s high level of play and composure, Azarenka might be in the locker room in under an hour.

Suddenly and quite unexpectedly, it seemed like a whole new ball game, but Williams continued to deliver off both wings and serve well, hitting her fourth ace to hold for 2-1.

Azarenka, significantly upped the ante, holding at love and going 4/4 on first serves while extracting errors from her opponent.

Williams, all too cognizant of her opponent’s newfound form and burgeoning confidence, dropped serve for the first time. Level at 2-2, Azarenka, steadfast and determined, once again held at love as Williams continued to misfire off the return.

Williams, the six-time US Open champion, was clearly rattled as she watched her opponent pounce on any short ball. Despite making 7/10 first serves, Williams came under pressure as Azarenka continued to hit up the middle, extracting errors and earning a break point.

Williams faced another as Azarenka, well inside the baseline to receive the second serve, uncorked a monstrous backhand down the line return winner. Williams righted the ship and managed to hold for 3-4 when Azarenka netted the forehand return.

Azarenka continued to serve effectively and with her well placed groundstrokes, had Williams on a string. With a massive backhand down the line, forehand stab volley and her first ace of the match, Azarenka held for 5-3.

Williams, serving to stay in the second set, quickly faced double break and set point as she smacked a makeable forehand in the net. Azarenka unloaded on an exquisite inside-out backhand to level the match at a set a piece.

A short while ago, it seemed inevitable that Serena would dominate her opponent and quickly secure a straight sets victory but Azarenka, refused to submit as she regained her composure and reasserted her authority.

Azarenka served first in the third and behind heavy hitting, held to 30 with an unbelievable backhand down the line. Williams, struck a 111mph ace out wide and appeared to be on her way to an easy hold but injured her left ankle back pedaling on the deuce point.

Mid-game, she called for the trainer as she limped to her chair. Based on the trainer’s recommendation, a medical time out was requested. Williams, who always tapes both ankles, had the left re-taped and after several minutes, stepped up to line to serve.

She missed the first serve, overcooked the backhand and faced break point. She leveled at deuce with a blistering crosscourt backhand but faced another break point and dropped serve when her crosscourt forehand went wide.

Azarenka, in the zone and with the momentum, held to 30 for 3-0 with a 90mph ace out wide. Williams, keenly aware that time was running out, dug in and despite missing 3/5 first serves, held to 15 when Azarenka netted a backhand.

Azarenka, playing with conviction, hit an amazing backhand down the line and held to 30 for 4-1. Williams continued to press as she missed 3/5 first serves and despite donating another double fault, hit her sixth ace, and held to 15 for 2-4.

Azarenka had never beaten Williams at a grand slam event. Now, just 8 points from her first grand slam final in seven years, held easily to 15 after Williams whiffed a backhand down the line.

Serena, seemingly unaffected by the ankle injury, served to stay in the match and opened with a forehand swing volley winner and closed it out with a huge serve up the tee, forcing her opponent to serve for the match.

Azarenka was not passive, hoping her opponent would commit more errors. Although she hit an extraordinary forehand down the line, she donated another double fault as it appeared she might succumb to the pressure.

The two-time US Open finalist impressively reset and struck a 109mph serve up the tee for match point and converted with an ace out wide!

No one saw this coming except perhaps Azarenka. She refused to yield to the demons of doubt and expectation. It was an inspired and mind-blowing performance given her inability to make first serves in the first set.

She hit 24 winners to 17 unforced errors while Williams finished with 35 winners and 28 unforced errors. While Azarenka improved her serving percentage and gained confidence off the ground, Serena’s serve, over the course of the match, became a liability, as she won just 42% of second serve points.

There will be no rematch of the 2018 women’s final: Naomi Osaka will battle Victoria Azarenka for grand slam glory.

The 2018 US Open champion leads the head to head 2-1, their last completed match at the 2019 French Open, won by Osaka in three tight sets. They were due to play two weeks ago in the final of the Western & Southern Open, but Osaka pulled out with a hamstring injury.