Azarenka dismantles Keys 6-2, 6-2 at French Open to reach the 4th round

Victoria Azarenka, the former world #1 was looking to reach the round of 16 for just the third time in her illustrious career (2008, 2012). The Belarussian’s best performance was a semifinal appearance in 2013. The two-time Australian Open champion and 2020 US Open finalist, is currently ranked #16.

Madison Keys achieved a career-high ranking of #7 and is currently ranked #24. Her best performance on the terre battue was the semis (2018) having reached the 4th round in 2016 and the quarters in 2019.

Prior to today’s encounter, they had met just once before in 2018 at the Miami Open where Keys retired after having dropped the first set. Azarenka won the toss and elected to receive.

Keys was on fire, striking three fantastic forehand winners to hold to 15 for 1-0. Azarenka returned the favor, holding to 15 for 1-1. Keys opened the third game with a forehand down the line winner and held to 30 for 2-1. 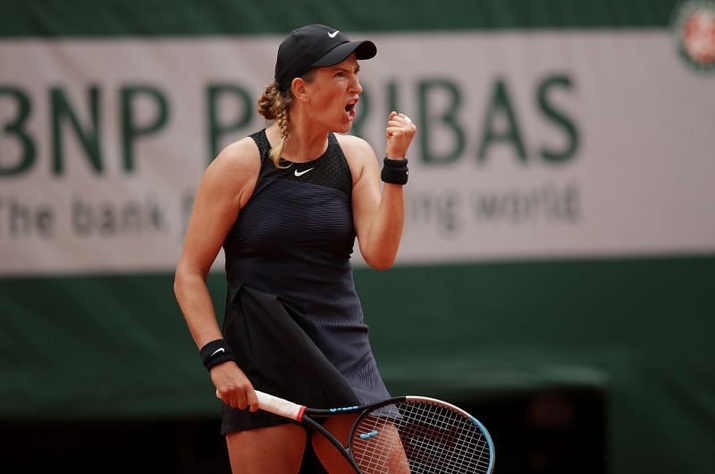 Azarenka’s serve was on point, as she made 5/6 first serves and held to 30 for 2-2. While the rallies were relatively short, each player struck the ball with conviction and precision as they attempted to dictate play.

Azarenka donated a double fault but consolidated the break for 4-2 with a spectacular backhand drop shot on game point. The thirty-one-year mom played aggressive but measured tennis and it paid off as she earned four break points in the following game. Keys managed to save two but dropped serve when Azarenka ripped a backhand crosscourt.

Keys served first in the second and following two backhand unforced errors went down 0-30. Unable to make a first serve, the 2017 US Open finalist faced three deuce and two break points and dropped serve after butchering a forehand down the line. The unforced errors and frustration grew in tandem as she was unable to execute her game plan.

Azarenka maintained her strategic focus to consolidate the break for 2-0. Keys appeared unwilling to employ a different strategy as she continued to commit errors including two consecutive off the forehand to dump serve for 0-3.

Azarenka felt pressure for the first time when she committed three unforced errors to drop serve. Keys pounced and consolidated the break making 6/6 first serves and striking an incredible inside-out forehand and one crosscourt on game point for 2-3.

Azarenka, determined to win in straights, struck two backhands down the line on consecutive points to hold for 4-2. Keys was often on the defensive as her opponent continued to hit with great depth. She faced double break point when she netted a drop shot and dropped serve when Azarenka crushed the forehand return.

The two-time grand slam champion served for the match but soon faced break point when she donated her second double fault. Keys went for broke, and it paid off as she reached deuce three times and saved two match points. Azarenka knew she had to serve it out so on her third match point she did with a huge serve up the tee.

Victoria Azarenka played a remarkably poised yet tenacious match, winning 67% on first serves and 56% on second serve points. While she had no aces, she gifted just two double faults and converted 5/11 break point opportunities.

Keys was undone by her unforced errors hitting 33 to just 12 for her opponent. The American served poorly winning just 51% of first serves and 37% of second serve points and had no aces.

Next up for Azarenka, the #31 seed, Anastasia Pavlyuchenkova who took out the #3 seed, and 2021 Madrid Open champion, Arnya Sabalenka. Azarenka leads the head-to-head 5-1 including the two on clay.

This will be a challenging, enthralling encounter as the twenty-nine-year-old Russian, who reached a career-high ranking of #13, is brimming with confidence having reached the semis on the dirt in Madrid.

Her road to the penultimate round was particularly impressive as she dispatched Madison Keys, Karolina Pliskova and Jennifer Brady before losing to eventual champion, Sabalenka.