Mackenize McDonald was still in search of his first ATP title. The twenty-seven-year-old from Berkeley, California reached a career high ranking of #48 last summer and is currently ranked #65. Two years ago at the happy slam, he reached the fourth round and was hoping to surpass that notable achievement.

This fortnight while challenging has been equally gratifying. In the opening round he conquered reigning NextGen ATP Finals champion and fellow American, Brandon Nakashima in five sets and overwhelmed the #1 seed and defending champion Rafa Nadal in straights two days later.

His opponent is no stranger to success with two career titles and a career high ranking of #33. Yoshihito Nishioka from Japan is the 31st seed and plays left-handed. He finished strong last season winning the title in Korea (d. Shapovalov) and picked up where he left off at the Adelaide International 1 in early January.

At that Australian Open tune up event he dispatched three players still in contention in Melbourne: Holger Rune, Alexei Popyrin and Mackie McDonald. He leads the head-to-head 3-1 having won the first two on clay and the most recent (Adelaide 2023) on hard. 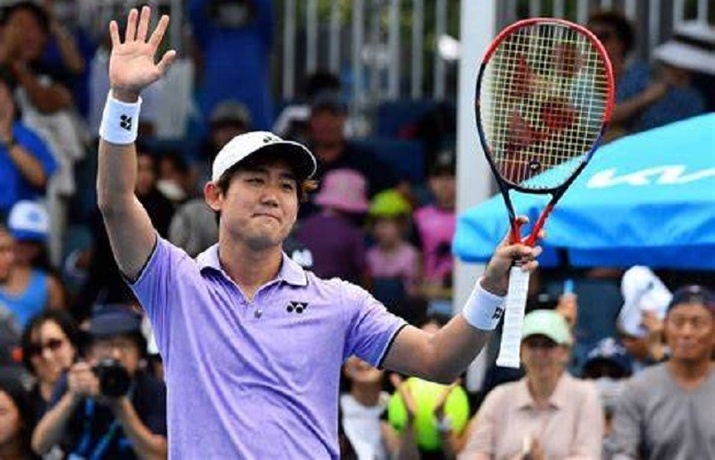 Under blue skies and 67 degrees, Nishioka opened the match and held to 30 for 1-0. McDonald opened with an ace up the tee and with another, held at love to level. Nishioka made 4/6 first serves and held to 30 for 2-1 while McDonald faced two break points yet held for 2-2 with a forehand volley and overhead smash winner.

Nishioka with heavy spin on the forehand, held at love for 3-2 with a brilliant backhand down the line while McDonald crushed a crosscourt forehand to level. Nishioka donated three unforced errors including a double fault and faced three deuce and three break points but held with two consecutive winners off the ground.

The American serving with new balls, committed a slew of unforced errors and faced three deuce and four break points yet held for 4-4 following two consecutive errors from his opponent.

Nishioka held to 30 for 5-4 while McDonald, with an ace up the tee to open the 10th, held at love for 5-5. Nishioka unloaded on the forehand to earn the opening point and held easily to 15 for 6-5. McDonald serving to force the tiebreak, opened with a huge inside-out forehand and with his fourth ace, held at love for 6-6.

McDonald trailed 3-5 in the breaker following a double fault and saved three set points the last with his fifth ace. Level at 6-6, Nishioka struck his first ace and with an errant forehand from McDonald, clinched the breaker and opening set.

McDonald served first in the second and donated five unforced errors including his third double fault. After saving break point with his second ace of the game, called for the trainer and took his seat following a fourth deuce point.

The trainer treated what appeared to be an abdominal injury. After leaving the court for a medical time out, the American returned and after a monster forehand down the line and a fantastic crosscourt backhand pass from Nishioka, dumped serve.

Nishioka missed 3/5 first serves including a double fault but held to 15 to consolidate the break. McDonald clearly despondent by the turn of events, faced triple break point and dropped serve following a spectacular crosscourt forehand from Nishioka.

Nishioka won an enthralling 25-shot rally on the opening point and held to 30 to consolidate the break for 4-0 while McDonald threw in a serve and volley and held to love for 1-4 making 4/4 first serves.

Nishioka opened the 6th with two consecutive backhand errors and faced double break point and following two additional errors, dropped serve for the first time. McDonald began to employ the underarm serve which undeniably frustrated his opponent. The American consolidated the break for 2-4 with a crisp crosscourt forehand volley and a whiffed forehand from Nishioka.

The 31st seed reasserted his authority holding to 15 for 5-3 while McDonald faced set point following a mishit forehand and lost the set when Nishioka pummeled a forehand down the line.

It was unclear whether McDonald would continue to play. Nishioka served first in the third and following three consecutive errors including a double fault, faced two deuce and break point but managed to hold for 1-0.

McDonald continued to utilize the underarm serve but faced four deuce and break point before holding after his opponent overcooked a backhand. Nishioka after throwing his racquet in disgust, opened the third with a sweet drop shot and held at love with a backhand lob and an ace up the tee.

McDonald faced double break point as the errors continued to accrue and dumped serve when he mishit a crosscourt forehand. Nishioka ever so close to the round of 16, struggled to close out the match and gave back the break when McDonald ripped an inside-out forehand.

The American however, was unable to consolidate the break as he gifted another double fault, two additional errors and conceded the match following another extraordinary forehand down the line return from Nishioka.

After a well-played, highly competitive first set, it was unfortunate to see the level disintegrate following McDonald’s injury. Nishioka is into the fourth round at a grand slam for the first time in his career. He finished with 3 aces, 4 double faults and won 72% of first and a respectable 51% of second serve points. He converted 6/16 break points and struck twenty-eight winners.

Standing in his way of his first grand slam quarterfinal is the 18th seed Karen Khachanov who leads the head-to-head 2-1. All three matches have been contested on hard with the Russian winning the first two in three sets and Nishioka clinching their fourth round match last summer in DC to two tiebreak sets. This promises to be another epic battle and their second at the Australian open.