The reigning French Open champion, world #1 and hometown favorite Ash Barty, takes on the #18 seed, American Alison Riske in the fourth round. Barty is striving to be the first Australian woman since Chris O’Neil in 1978 to win her home slam.

Barty, just twenty-three years of age, reached a career high ranking of #1 last June. She has reached the fourth round or better at the four grand slams, winning the title at Roland Garros last spring. Last year she reached the quarters down under falling in straight sets to eventual finalist, Petra Kvitova.

The Queensland native has had a strong start to the current season coming off her stupendous victory at the WTA Finals last fall. Although she lost to Jennifer Brady in the fourth round in Brisbane, she went on to win the title in Adelaide defeating Anastasia Pavlyuchenkova, Marketa Vondrousova, Danielle Collins and Dayana Yastremska in the final in straight sets.

Her 4th round opponent, Alison Riske, is playing the best, most consistent tennis of her career reaching three finals last season, including the title on grass at Rosmalen. She lost both hard court finals to the unpredictable yet supremely talented Belarussian, Aryna Sabalenka. The twenty-nine-year-old American attained a career high ranking of #18 last fall and is making her first appearance in the fourth round down under. 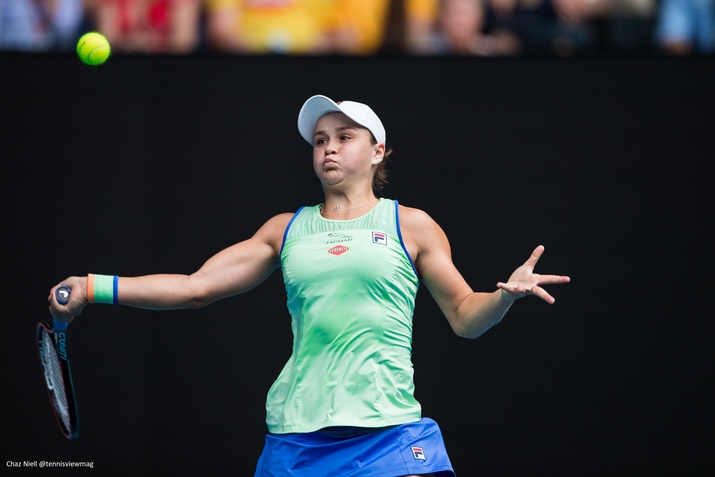 The world #1 knows better than to underestimate her opponent having lost their only previous tour level meeting last June at Wimbledon. I expect this to be a hard-fought three-setter with Barty prevailing, utilizing her exceptional variety as well as the enthusiastic home crowd support.

Marin Cilic and Milos Raonic arrived in Australia seeking redemption. Both have achieved a career high ranking of #3 and have reached grand slam finals. Cilic, the thirty-one-year-old from Croatia is the 2014 US Open Champion and 2017 Wimbledon and 2018 Aussie Open finalist, losing both to the twenty-time grand slam champion, Roger Federer.

Raonic, born in Montenegro but represents Canada, reached his lone grand slam final in 2016 at Wimbledon, losing in straights to Andy Murray. At the Australian Open earlier that season, he reached the semis, losing in five to Murray. The 29-year-old is no stranger to high-stakes matches or chronic injuries.

In 2015, he underwent surgery to repair a nerve in his right foot. Unfortunately, that injury led to imbalance throughout his body, from his ankle to his shoulder. During that semifinal run to the semis down under in 2016, Raonic sustained an adductor injury which caused him to miss six weeks of competition. Later that season he suffered an ankle injury and a quadriceps tear.

Sadly, 2017 saw more of the same, with the 6’5 Canadian tearing his right hamstring. He managed to reach two finals that season despite incessant injuries and time away from competition.

His ranking continued to free-fall to #30 during the 2018 season and although he sustained a knee injury, he reached his first final and made the quarters at Wimbledon. At last year’s Australian Open he was seeded #16 and advanced to the quarterfinals.

Motivated and healthy, Raonic played one warm-up event in Qatar, losing in two tiebreakers in the fourth round to the young Frenchman, Corentin Moutet.

At the 2020 Australian Open the #32 seed has impressed with a comprehensive straight sets victory over the #6 seed and Nitto ATP Finals champion, Stefanos Tsitsipas.

Cilic, like his opponent, has seen his ranking precipitously drop over the last few seasons and is endeavoring to regain his form, confidence and health as he suffered from food poisoning last spring. He finished the season ranked #39 – the first time he fell outside the top 15 in five years and the first time since 2008 that he failed to reach a final in over one year.

His sole preparation prior to the Aussie Open was the inaugural ATP Cup. Cilic has blasted his way to the 4th round taking out Moutet, Benoit Paire and Roberto Batista Agut- the last two in five sets over seeded players.

This will be their fourth tour level meeting; Cilic leads the head to head 2-1 having won the last two, both contested on clay. The only time they played on an outdoor hardcourt was in 2013 at Indian Wells which Raonic won in three sets.

This fourth-round encounter promises to be a baseline and serving slug fest. I am interested to see which player cedes the least amount of baseline real estate and who decides to mix it up by moving forward and finishing points at the net. Both have a lot to prove – mainly to themselves – therefore, I am predicting Marin Cilic to secure victory in a five-set thriller.