Aryna Sabalenka continues her tear on tour this season with a title in Adelaide and a comprehensive straight sets victory over American Shelby Rogers. Beaming with confidence and poise that was in short supply last season, the twenty-four-year-old from Belarus has announced her presence as a threat down under.

Sabalenka ranked and seeded fifth, won the toss and elected to serve. Although she missed 4/6 first serves, held to 30 with an ace up the tee and a netted return. Rogers six years older, is currently ranked #51 having reached a career high of #30 last August. With five winners including two aces and four errors, the South Carolina native faced four deuce and two break points yet held for 1-1 when Sabalenka missed a makeable forehand pass. 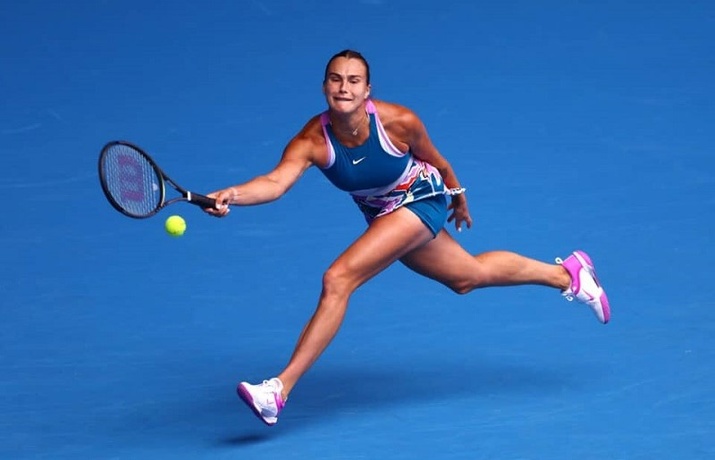 Sabalenka continued to misfire with the forehand but with an overhead smash and an adequate drop shot, held to 15 for 2-3. Rogers faced 0-30 following two backhand errors and with another faced break point and dumped serve with a netted forehand while Sabalanka held at love for 4-3 with a monster serve up the tee.

Rogers serving with new balls, struck two aces but after missing a slew of first serves, faced five deuce and three break points and dumped serve when Sabalenka crushed the crosscourt backhand return. Even though Sabalenka missed 3/4 first serves she closed out the set at love with two spectacular backhand winners.

Rogers served first in the second and despite a double fault, hit two aces and a huge serve up the tee on game point for 1-0. Sabalenka returned the favor with two aces but faced break point following an incredible inside-in forehand from Rogers. Sabalenka replied with an astonishing inside-out backhand, a forehand half-volley and another ace to level.

Rogers continually faced pressure on serve as her opponent feasted on short second serves. The American missed 6/8 first serves and it cost her as Sabalenka converted break point with a remarkable crosscourt backhand return.

The former world #2 consolidated the break for 3-1 with three forehand winners while Rogers gifted two double faults to dump serve. Sabalenka continued to impress on serve making 4/4 first serves to hold at love for a commanding 5-1 lead.

Rogers serving to stay in the match was emotionally deflated and tactically paralyzed. She missed 3/6 first serves including her third double fault and lost serve and the match when her opponent ripped one last backhand crosscourt.

It was a dominate yet sublime performance. Sabalenka hit 3 aces and no double faults and won 74% of first and 61% of second serve points while converting 5/11 break points. If she continues to play with this much conviction and composure, next Saturday she will find herself battling for her first grand slam trophy.