Alex de Minaur: From Down Under To Global Superstar

The 19-year-old was named ATP newcomer of the year at the end of last season and no doubt has his sights set on his first career title as the 2019 season gets underway in his native Australia.

The teenager, with the scintillating two-handed backhanded, has achieved a career-high ranking of #31 and is on course to half that given his remarkable and consistent play last season.

Although he resides in Alicante, Spain and maintains Australian and Spanish citizenry, de Minaur represents Australia in Davis Cup. Born to a Uruguayan father and Spanish mother, he began hitting tennis balls at the age of four.

A prodigious junior player, de Minaur first gained notice at the start of the 2017 season when he dispatched Mikhail Kukushkin and Frances Tiafoe to reach his first ATP main draw at the Brisbane International losing to Mischa Zverev in the first round. 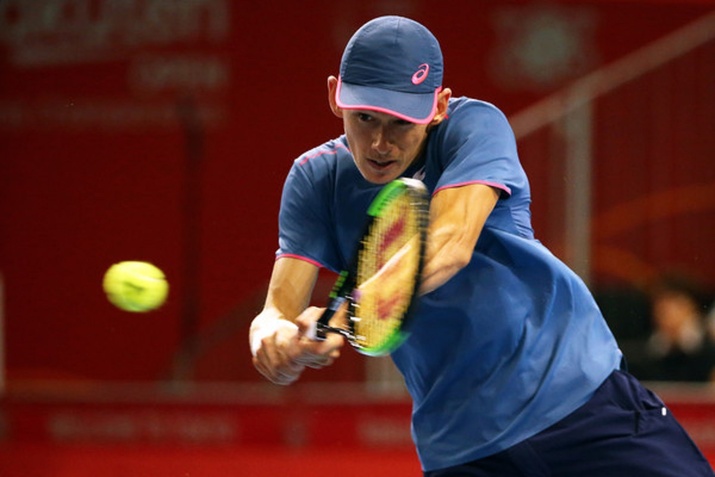 After receiving a wildcard at the Apia International Sydney, de Minaur achieved his first tour- level win defeating world #46 Benoit Paire but retired mid-match in the following round.

He made his grand slam debut at the 2017 Australian Open after being granted a wildcard. In his opening round match against Gerald Melzer, he saved four match points in the fourth set and won in five but lost in the following round to Sam Querrey.

Over the course of the season he primarily played on the challenger circuit, winning one title on the Futures circuit and finished the year ranked #208.

de Minaur was issued a wildcard into the 2018 Brisbane International and made some noise in defeating Steve Johnson and Milos Raonic before falling to Ryan Harrison in the semifinals.

Clearly inspired and at ease playing in front of a home crowd, the Australian phenom replicated those results the following week in Sydney, reaching the semis by defeating Fernando Verdasco, Damir Dzumhur, Feliciano Lopez and Benoit Paire.

Although he lost the final to another young rising star, Daniil Medvedev, de Minaur became the youngest back to back semi-finalist since Rafa Nadal in 2005.

Even though he lost in the opening round at his home slam, he took a set off the #19 seed and former world #4, Tomas Berdych. Last spring, he won his first Challenger Level title in Nottingham and continued his fine form on the grass reaching the third round at Wimbledon losing to the two-time champion and world #1, Rafa Nadal.

He reached the final on the hard courts in Washington, DC., saving four match points in the second set tie-breaker during his semifinal match against Andrey Rublev. Despite losing in straight sets to world #4 Alexander Zverev, de Minaur achieved two career milestones; the final of an ATP 500 event and a top 50 ranking.

At the final slam of the year in New York City, he reached the third round losing an epic, five set battle with world #7 and 2014 US Open champion, Marin Cilic. I was fortunate to have witnessed this enthralling match in the new Louis Armstrong Stadium and was particularly impressed with de Minaur’s composure under fire.

Despite being up two sets on the former US Open champion, the teenager kept it close – extremely close – as the final set was decided 7-5 with Cilic ending the dual with 167 points to de Minaur’s 166!

The young Australian would continue to play well during the fall indoor season notching impressive wins over Giles Simon, Dzumhur and Paire. He was undefeated in round robin competition at the Next Gen ATP Finals in Milan before losing in four sets to Stefanos Tsitsipas.

Few things are guaranteed as the 2019 season commences down under but one most definitely is certain; Alex de Minaur is no longer flying under the radar. Seeded 7th at the Brisbane International, he is headed for a quarter-final showdown with Rafa Nadal. Now that’s the way to ring in the New Year!