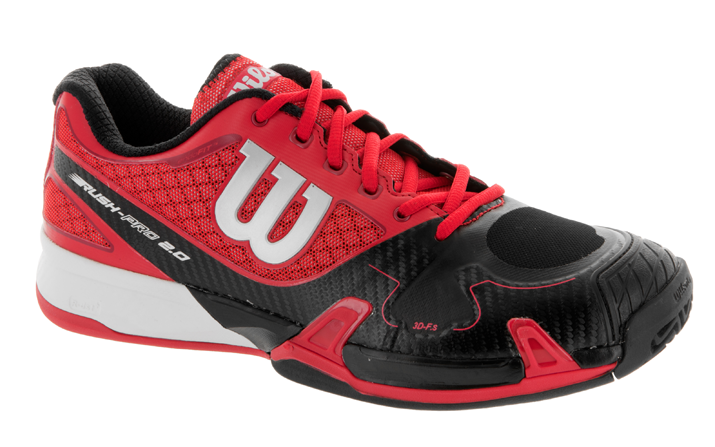 In November, Wilson released the second version of their flagship Rush Pro tennis shoe.  While the Wilson Rush Pro 2.0 shares a name with its predecessor, don't be fooled into thinking it's just a rehash of the original.  Weighing in at just 12.7 ounces in a men's size 9, Wilson has trimmed off a full ounce of weight, made the upper sleeker, and created a faster-feeling shoe all around.

The initial fit and feel of the Rush Pro 2.0 was excellent.  They felt just a touch stiff underfoot at first, but that’s not uncommon, and I didn't really give them any break-in period.  Personally, I thought the inclusion of a quality Ortholite insole made a difference in terms of step-in comfort.  The Rush Pro 2.0 felt true to size both in terms of length and width.  The semi-attached tongue design does create a sock-like fit that really hugs the midfoot—which I really liked—but may feel restrictive for players with wider feet, orthotics, or bulky ankle braces.

On court the Rush Pro 2.0's felt pretty comfortable as well.  They offered enough cushioning to keep my feet from feeling beat up at the end of a long match, but I wouldn't have minded a bit more protection, especially in the forefoot.  As always, though, less cushioning is part of the tradeoff for lighter weight and a lower profile.

Stability and traction were both excellent, too.  I did have a few minor slips when making very aggressive moves, but the stability claws on the Rush Pro 2.0's forefoot kept my foot locked in.  Other than that, I had no complaints at all with regards to traction or stability.

All in all The Wilson Rush Pro 2.0 is a very, very nice shoe—and it's good looking, too.  Lighter and sleeker than the previous version, the Rush Pro 2.0 doesn't skimp on cushioning or support.  There’s plenty to like for high-level players, and of course plenty of features for less serious players, too.