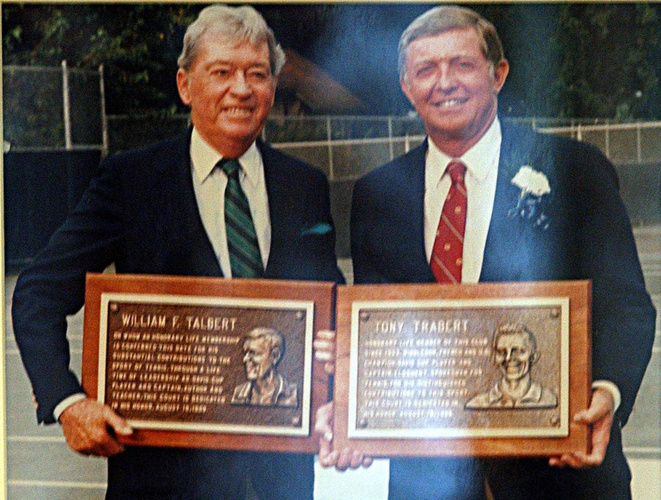 CINCINNATI (Feb. 4, 2021) - The Western & Southern Open joins the tennis community in mourning the loss of Cincinnati-native Tony Trabert who passed away on Feb. 3 at the age of 90.
Trabert was introduced to tennis on the courts at Bond Hill Park near his childhood home and would go on to be the No. 1 ranked amateur player in the world while winning 10 Major championships during his career.

“The world knew Tony for his excellence in tennis, from his remarkable career to his Davis Cup success as a player and captain to being the voice of the US Open during his decades with CBS Sports,” said Western & Southern Open Tournament Director J. Wayne Richmond. “Tony’s impact went far beyond the court, in particular to those who knew him closely. He was so proud of his Cincinnati roots and was always a loyal supporter of the tournament here.

“Tony also worked very hard to promote the game, developing junior players at summer camps and honoring the great history of the sport during his tenure as president of the International Tennis Hall of Fame. Above all else, Tony was wonderful friend and an incredibly loving father, grandfather and great-grandfather. He will be dearly missed.”

He attended the University of Cincinnati and won the Intercollegiate singles title in 1951 while also reaching the doubles final. That same year he was a starter on the UC basketball team that played in the National Invitational Tournament.

Trabert was a six-time winner of the Tri-State Tennis Tournament, what is today known as the Western & Southern Open. His 1951 singles title came with a win in the final over his friend, idol, mentor and fellow Cincinnatian Bill Talbert. Trabert also won the singles title in 1953 to go with four doubles titles (1949, ’51, ’53, ’55).

At the Majors, Trabert was 10-1 in finals, winning five singles and five doubles titles. He claimed his first Major at the age of 19 by winning the French Championship doubles with Talbert in 1950. He won his first singles Major in 1953 just months after finishing a tour of duty in the Navy Reserves at the U. S. Championship without dropping a set.

Trabert’s 1955 campaign is still considered one of the greatest single seasons in tennis history. A January loss in the semifinals of the Australian Championship was his only blemish at the Grand Slams as he became at the time just the second player to have won three of the Majors in a single season. His Wimbledon and U. S. Championship titles were won without dropping a set.

Over 23 tournaments in 1955, Trabert won 18 singles titles while compiling a record of 106-7. He also won more than a dozen doubles titles that season. In August of that year, he was featured on the cover of Sports Illustrated.
Trabert was a member of five Davis Cup teams as a player, winning a singles and doubles match to help the United States reclaim the Cup in 1954. He would then serve as team captain from 1976-80, guiding a team with the likes of John McEnroe and Jimmy Connors to a pair of titles.

Following his playing career, Trabert spent more than three decades as a tennis and golf commentator for CBS.

Trabert was inducted into the International Tennis Hall of Fame in 1970 and would later spend 12 years as president of that institution.

Trabert is survived by his wife of more than 30 years, Vicki, 14 grandchildren and six great-grandchildren.