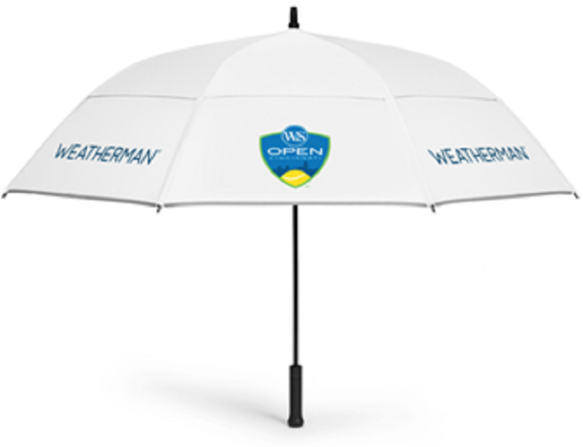 NEW YORK  – The Western & Southern Open, one of the top tennis tournaments in the United States, today named Weatherman the Official On-Court Umbrella for the 2019 tournament.

Taking place from Saturday, August 10th to Sunday, August 18th in Mason, Ohio, just outside of Cincinnati, Weatherman umbrellas will be used to keep players protected from the sun during change-overs on all eight Championship match courts. They will also available for purchase at on-site merchandise locations throughout the nine-day event at the Lindner Family Tennis Center.

The Western and Southern Open, part of the US Open Series, is one of only five tournaments in the world to host and ATP Masters 1000 and WTA Premier event at the same venue in the same week.

“The Western and Southern Open is one of the most well-respected tennis tournaments in the world and to have our game-changing product be a part of every single match makes us very proud,” said Tyler Kupper, Chief Revenue Officer/Partner at Weatherman. “When weather plays a role, we’re confident the players and umpires will be protected from all of the elements, including the sun as each of our umbrellas is designed with a UPF 50+ barrier.”

Weatherman's features change how athletes of all skill levels approach weather conditions on the court. Industrial-strength fiberglass prevents breaking and inverting, and vented canopies withstand winds up to 55 mph. Teflon-coated fabric keeps players dry and the UPF 50+ barrier, the highest level of protection available, protects them from the sun.

The Weatherman mobile app ensures preparedness by delivering weather alerts before you step foot on the court. The app also provides comprehensive weather forecasts for multiple, customizable locations and allows you to locate your umbrella if you ever leave it behind, via a Bluetooth tracker included in every package.

This is Weatherman’s first partnership in tennis after having significant success in the golf space after launching in November 2017. Weatherman’s unique features led Golf Digest to award it the Editors’ Choice Award for “Best Umbrella” for two consecutive years in 2018 and 2019. Weatherman was also named the official umbrella of the LPGA Tour and was the official umbrella supplier of the 2018 U. S. Ryder Cup Team and the 2019 U. S. and European Solheim Cup teams.

The Western & Southern Open started in 1899 and is the oldest professional tennis tournament played in its original city in the United States. Each year, the event is held at the Lindner Family Tennis Center in Mason, Ohio, and has attracted more than 190,000  fans in four of the last five years.

“We are thrilled that the Western & Southern Open will be the first tennis partnership for Weatherman,” said Director of Business Development Shawn Leibold. “We take pride in providing the best possible experience for our players, and these Weatherman products will now be a part of that, no matter the weather.”