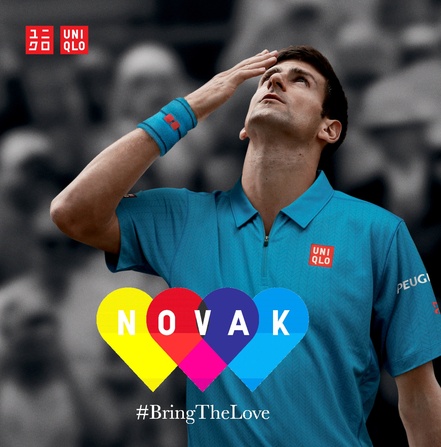 NEW YORK  – UNIQLO announced that it will launch replica game wear worn at the 2016 U. S. Open Tennis Championships by its Global Brand Ambassadors, Novak Djokovic, the world's top-ranked professional tennis player, and Kei Nishikori, the top men's singles player in Asia*. A total of 13 items nearly identical in functionality and design to those worn by the players. The full collection will be sold at the UNIQLO 5th Ave. store and at UNIQLO.com, with other select stores carrying parts of the collection.

“#BringTheLove” campaign to fill New York with love from Novak Djokovic
Novak Djokovic believes that love is the most important thing in the world, and is continually active in social action programs, including establishing a fund to help underprivileged children in his home country of Serbia. 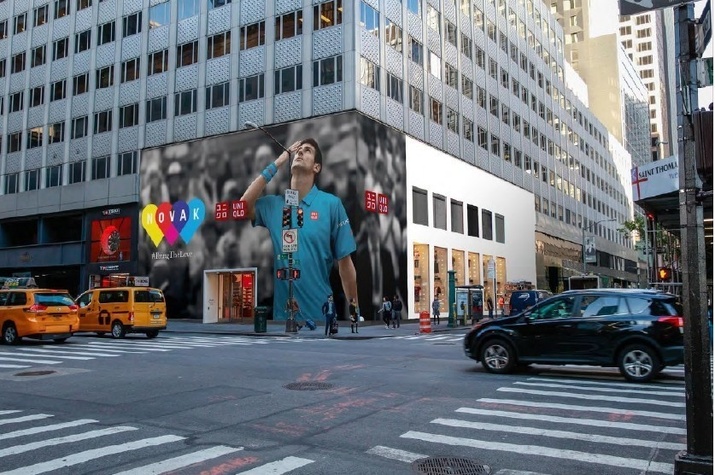 Sharing this sentiment, UNIQLO launched its “#BringTheLove” campaign in Paris of May 2016 to help convey Djokovic's love to all people on the occasion of the French Open. The “#BringTheLove” campaign continues in New York during the U. S. Open, to again convey this same message to visitors from around the world, through outdoor advertisements placed in major areas around the city, including a full outdoor wrapping of the 5th Avenue Global Flagship Store beginning August 25.

UNIQLO will also conduct a social media campaign beginning Aug. 25 to bring love to children from people around the world who share Djokovic's sentiment. For every social media post using the “#BringTheLove” hashtag, UNIQLO will donate one dollar (up to$25,000 ) to New York Junior Tennis & Learning (NYJTL), an organization that supports the healthy development of children through tennis. Posts can be made through Twitter, Facebook, and Instagram.

CEO and President from New York Junior Tennis & Learning, Dr.Deborah Antoine, commented, “NYJTL is thrilled to partner with UNIQLO as it allows us to further our mission and to serve New York City children by developing character through tennis and education for a lifetime of success on and off the court.” 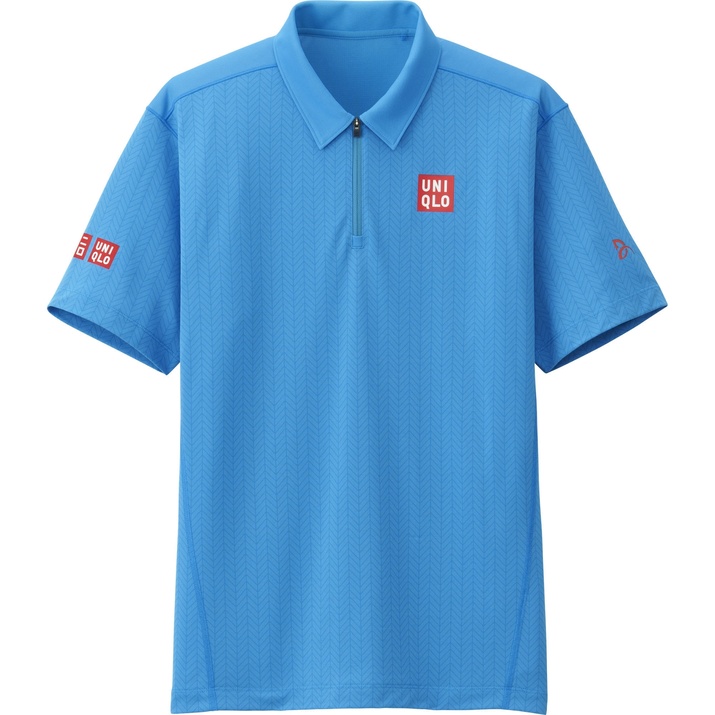 Djokovic model
The design theme for the 2016 Novak Djokovic model wear is “Unbeatable,” reflecting his image in tournaments around the world. For the U. S. Open, the Djokovic model features a blue turquoise color, with breathable mesh throughout the back and underarms, and a zippered collar to finely regulate body temperature. 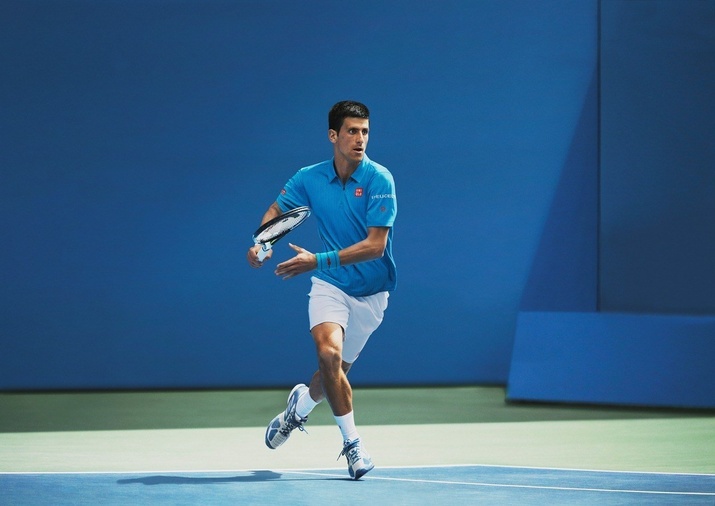 Nishikori model
The Nishikori model features a graphic of dragonfly wings. The dragonfly is considered a lucky charm in Japan, and was a popular motif on the armor of samurai warriors, who called it the “victory insect.” In terms of functionality, the entire back is a mesh material, allowing for peak performance in the severe heat of the U. S. Open.

The main material used in the game wear is the highly functional Dry EX material, jointly developed with Toray Industries and highly trusted by the UNIQLO Global Brand Ambassadors. A special arched structure provides faster drying than ordinary dry function material, preventing stickiness from perspiration to maintain comfort all throughout play. The raised structure is well suited to the strenuous movements of tennis. Highly breathable mesh is used in areas that accumulate sweat during the match, helping prevent overheating, and allowing players to maintain top performance. 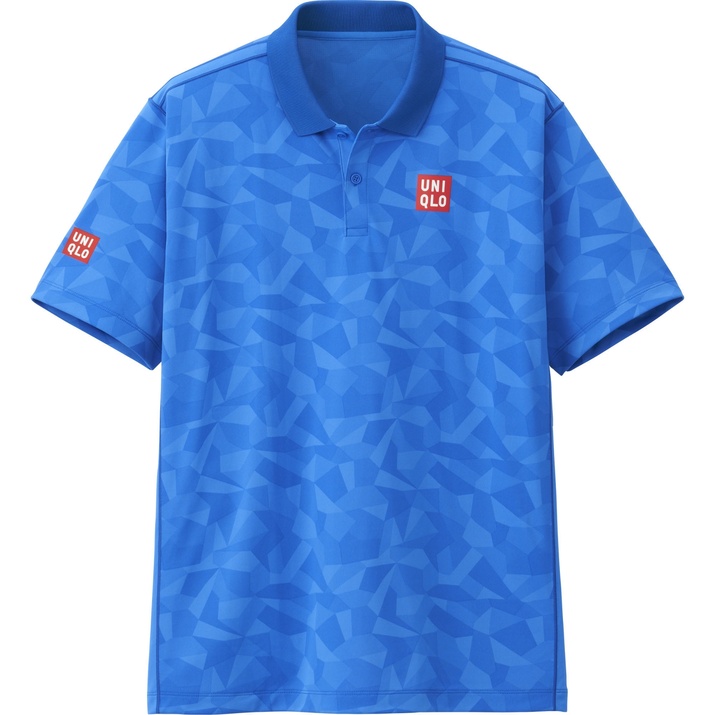 Carrying bag used by athletes now available.
In response to popular demand, UNIQLO will now offer the newly designed Boston bag used by its Global Ambassadors. The design features the names of cities around the world where UNIQLO has stores, with “New York” printed in the largest letters for the bag used at the U. S. Open. With a 41-liter capacity (2,500  cubic inches), and several internal pockets, the design provides efficient storage. The patent leather material is water and stain resistant, making it ideal for outdoor sports.

About UNIQLO LifeWear
Apparel that comes from the Japanese values of simplicity, quality and longevity. Designed to be of the time and for the time, LifeWear is made with such modern elegance that it becomes the building blocks of each individual's style. A perfect shirt that is always being made more perfect. The simplest design hiding the most thoughtful and modern details. The best in fit and fabric made to be affordable and accessible to all. LifeWear is clothing that is constantly being innovated, bringing more warmth, more lightness, better design, and better comfort to people's lives. 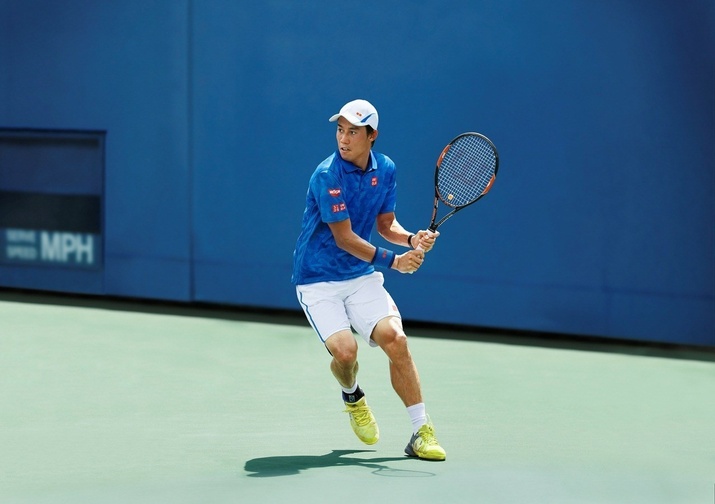 UNIQLO continues to open large-scale stores in some of the world's most important cities and locations, as part of its ongoing efforts to solidify its status as a truly global brand. Today the company has a total of more than 1,700  stores in 17 markets worldwide including Japan, Australia, Belgium, China, France, Germany, Hong Kong, Indonesia, Malaysia, Philippines, Russia,Singapore, South Korea, Taiwan, Thailand, U. K. and the U. S. In addition, Grameen UNIQLO, a social business established inBangladesh in September 2010, currently operates several Grameen UNIQLO stores in Dhaka. UNIQLO manages an integrated business model under which it designs, manufactures, markets and sells high-quality, casual apparel. The company believes that truly great clothes should be supremely comfortable, feature universal designs, are of high quality and offer a superb fit to everyone who wears them.

With a corporate statement committed to changing clothes, changing conventional wisdom and change the world, Fast Retailing is dedicated to creating great clothing with new and unique value to enrich the lives of people everywhere. For more information about UNIQLO and Fast Retailing, please visit www. uniqlo.com and www. fastretailing.com.