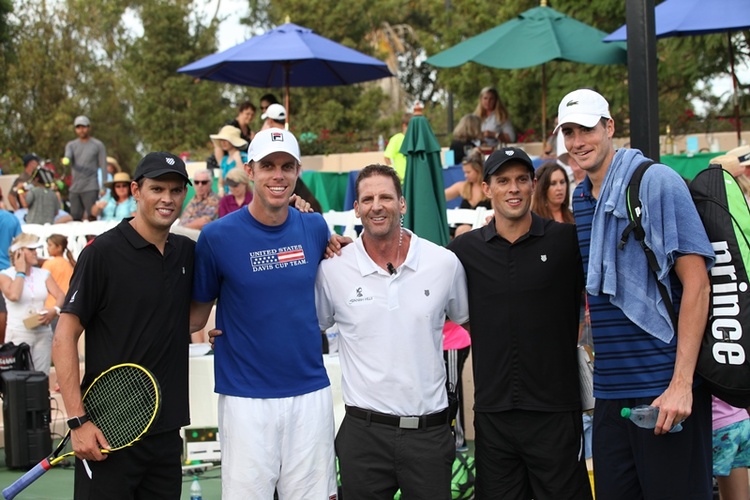 CAMARILLO, Calif. – The Bryan Bros. Tennis Fest is returning to Southern California as the all-time winningest doubles team in tennis history will once again host the popular fundraiser that gives back to the Ventura County community where Bob and Mike Bryan grew up.

The Bryan Bros. Tennis Fest is set for Sunday, Sept. 22, at Spanish Hills Country Club in Camarillo at 3:00 p. m. Mike and Bob will be joined by special guests and tennis greats from past and present and longtime friends and former Bryan Bros’. U. S. Davis Cup teammate James Blake and Sam Querrey. All four popular American pros will take part in a Pro Doubles Exhibition in the headlining event of the day, which concludes with a concert performance by the Bryan Bros. Band.

Individual tickets are now on sale for $125 (children under 18 are $50) and can be purchased on the website: www. BryanBrosTennisFest.com or by CLICKING HERE. The event will once again feature wine and food tasting, a live auction, pro-am, and performance by the Bryan Bros. Band

The Bryans recently reached 1,100  tour-level doubles wins as a team and hold the all-time record for achieving the World No. 1 doubles ranking jointly for 438 weeks. Blake is USTA Foundation Chairman of the Board and a former No. 4-ranked player in the world. Querrey, who grew up in Thousand Oaks just up the US Highway 101 from the Bryan Bros., is also a former American No. 1 singles player and advanced to the quarterfinals of Wimbledon this year upsetting No. 5 seeded Dominic Thiem in the first round.

Sponsorship opportunities are also still available. Sponsors receive a private court side table and have access to the exclusive sponsor's clubhouse. A few sponsor tables remain, and can purchased for a donation of $2,000  for a table of four. CLICK HERE for more information about becoming a sponsor of the event.

Over the years, the event has raised more than $1.2 million for the Bryan Bros. Foundation to benefit both the Ventura County Junior Tennis Association, as well as the Santa Barbara Tennis Patrons and many other local children's charities.

For more information on the Bryan Bros. Foundation see the website at: https://www. bryanbrostennisfest.com

To request a press credential to cover the event, please email Steve Pratt at: stevep@bzapr.com.